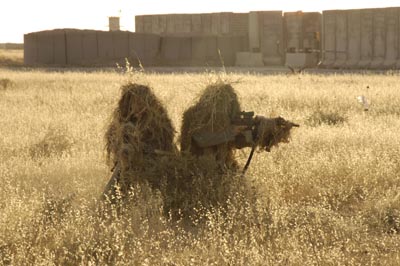 e Air Force has some 350 sharpshooters, those specially trained security forces airmen who serve as counter-snipers. In Iraq, airmen of the Close Precision Engagement Team with the 506th Expeditionary Security Forces Squadron use a variety of cover techniques to stay invisible outside the wire as they watch over soldiers and other airmen and “neutralize,” if necessary, any threats, reports SSgt. Markus Maier. They go out first, setting up well in advance to be able to relay word on where and what people are doing in the area. SSgt. Curtis Huffman, the CPET NCO in charge, explained: “We respond to routes that get hit by [improvised explosive devices] a lot, or an area that is known for launching [indirect fire operations]. We’ll set up somewhere concealed along that route or that area where we can watch people setting stuff up so we can get them before they can hurt our guys. We could be there from 24 to 72 hours.”