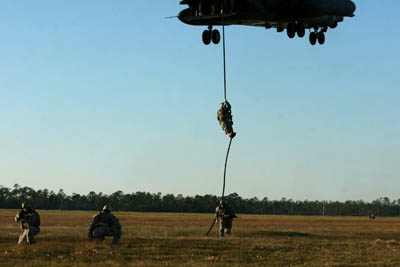 Air Force Special Operations Command is in the midst of Emerald Warrior 07, the first exercise AFSOC has developed entirely on its own, according to an AFSOC news release. The intent is to mix special ops with conventional forces with US Special Operations Command as the supported command. The training event, which began Oct. 25 and runs to Nov. 3, comprises active and reserve airmen, US soldiers, and coalition forces, to include some from Denmark, Germany, Lithuania, and Norway. Participants used both live and virtual net-centric weapons. Fortunately, simulation technology has become so advanced in recent years that it can give coalition forces realistic combat training. “Crews can train to levels they are not allowed to in the live aircraft,” explained Capt. Gary Lee, with AFSOC’s 19th Special Operations Squadron at Hurlburt Field, Fla.