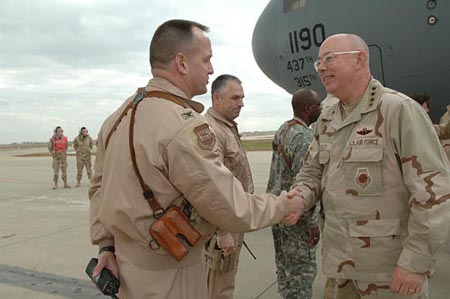 nance in air, space, and cyberspace remains vital for defending the United States and its interests, says Chief of Staff Gen. Michael Moseley in his newly issued white paper. “No modern war has been won without air superiority. No future war will be won without air, space, and cyberspace superiority,” the Chief writes in the document, which charts Air Force strategy for the next two decades and defines USAF’s “indispensable role in promoting and defending the national interest.” Moseley says the Air Force’s ability to fulfill its missions “is already being tested” since it operates with the oldest inventory in its history and has been “battered by 17 years of continuous combat.” Meanwhile, ascendant powers, “flush with new wealth and hungry for resources and status” are posturing to contest US superiority with capabilities like sophisticated “generation 4-plus” fighter aircraft, modern integrated air defenses, offensive counterspace systems, and unmanned aerial vehicles. Potential adversaries view cyberspace in particular as “a relatively inexpensive venue to offset our traditional advantages in air and space,” he writes. To counter this, “We must position the Air Force to secure America’s superiority in all domains,” he continues. This includes “appropriate mixes of stand-off capabilities; penetrating manned aircraft; enhanced cyber capabilities; advanced unmanned combat systems; operationally responsive space; and breakthroughs in fields such as electromagnetic spectrum physics, directed energy, nanotechnology, bioengineering, super-stealth, and hypersonics—all wedded to innovative concepts and superior training.” The character, tempo, and velocity of modern warfare “already severely test our ability to adapt,” Moseley states. “Therefore, redefining the Air Force for the 21st Century is an urgent national security requirement—not a luxury we can defer.” Rising to the challenge is not a choice, he says. “It is our responsibility to bequeath a dominant Air Force to America’s joint team that will follow us in service to the Nation.”