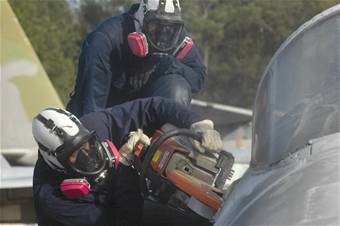 evelopment of new technical inspection procedures for the Air Force’s fleet of F-15 A-D models under an extended grounding order became much easier when engineers and technicians at Warner Robins Air Logistics Center in Georgia put an F-15 under the saw. Technicians with the 653rd Combat Logistics Support Squadron cut the two upper longerons out of an F-15 used for ground combat training at Warrior Air Base, a remote area on Robins Air Force Base. That enabled the 830th Aircraft Sustainment Group to continue their efforts to produce a nondestructive inspection process that F-15 maintainers can use in the field to “detect any abnormalities that might be found in the longerons,” said John Richards, 830th ASG deputy director. (USAF report by Amanda Creel.)