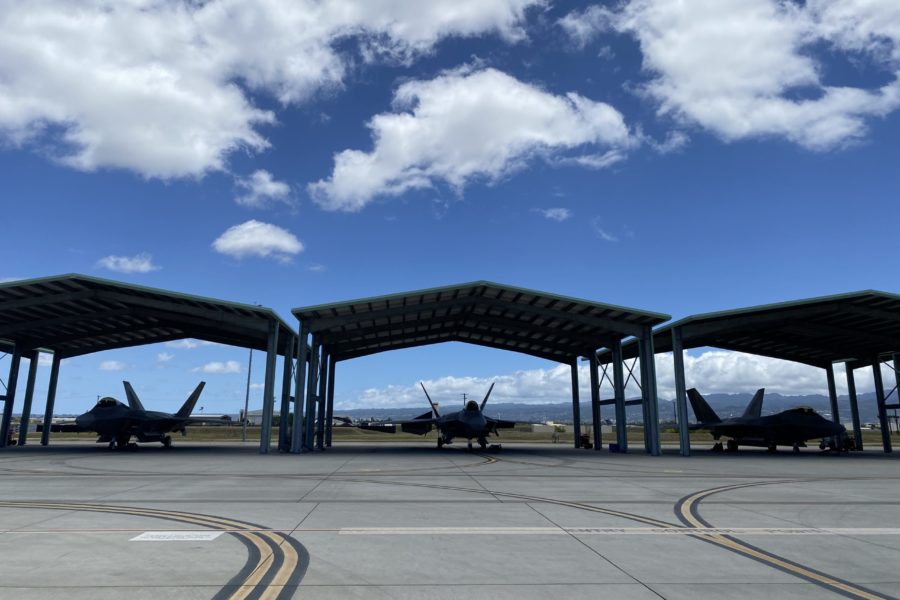 JOINT BASE PEARL HARBOR-HICKAM, Hawaii—Just behind the F-22 maintenance shop at Joint Base Pearl Harbor-Hickam, Hawaii, a tall chain-link fence blocks access to a lengthy roadway leading to 13 sunshades, each standing more than 30 feet high.

For a dozen years, thousands of Hawaiian maintainers have supported, and hundreds of pilots have flown, the fifth-generation aircraft from Hickam’s strategic Pacific location. But in recent months, a tinge of sadness and uncertainty has radiated through the F-22 support team and pilots as Air Force leaders called for the retirement of 33 of the 186 F-22s in the fleet to make way for investments in next-generation fighters.

None of Hickam’s F-22s, which represent 20 percent of the combat-capable platforms, would be affected, but the signal from Air Force leaders is clear to all those at this proud place: The F-22 will eventually be phased out.

“There’s nothing that compares to it,” said Hawaii Air National Guard Master Sgt. Ryan Morita, superintendent for the power support systems of the 154th Maintenance Squadron that supports the F-22.

“Look at it—it just looks like it’s bowed up. It’s ready to go,” Morita said with a hard laugh during a recent Air Force Magazine visit to Hickam. Morita has served in the Guard for 31 years and supported the F-22 ever since it arrived July 1, 2010.

Arguments that defense dollars should be set aside for newer generation F-35s did not phase the Hawaii native as he made the long walk from the workshop to the sunshades, his smile beaming ear to ear the whole way.

More than $4.1 billion is set aside to upgrade the remaining F-22s over the next five years according to the fiscal year 2023 defense budget now before Congress. In recent weeks, first the Senate, then the House pushed back on Air Force plans to reduce the F-22 fleet.

On June 16, the Senate Armed Services Committee passed a version of the National Defense Authorization Act that ruled out retiring the 33 oldest F-22s, which are used for training, and which the Air Force deems too expensive to maintain. On June 20, the chair of the House Armed Services Committee followed suit, releasing a markup for debate that goes further, calling for the full fleet to remain and the older jets to be upgraded at a cost of $1 billion.

The 19th Fighter Squadron in the Pacific

Commander of Hickam’s 19th Fighter Squadron Lt. Col. Paul Lopez, who has flown the F-22 since 2011, told Air Force Magazine that the platform is highly maneuverable and optimized for air-to-air combat.

Each week, he lifts off from Hickam Field on the southwest corner of Oahu island and flies to training areas either north or south to rehearse aircraft handling characteristics and confidence maneuvers such as the cobra, the pedal turn, or a high angle of attack loop.

Hickam pilots borrow the surfing term “Hang 10” to describe the initial maneuver for all three moves, a full 90-degree heavenward nose climb. In the pedal turn, the aircraft executes a minimum radius turn, or making a turn in the smallest possible ground area. In the high angle of attack loop, the aircraft rises, flips upside down, and loops back, all in less than a quarter of a mile. In the cobra maneuver, the aircraft abruptly climbs then levels off, the maneuver forming the shape of a poised king cobra.

“It’s almost like you put on the brakes and they’ll fly right by,” said Lopez of the cobra move. The squadron commander from Virginia Beach, Va., flew the F-22 at Joint Base Langley-Eustis, Va., before arriving to Hickam in 2021.

Practicing the maneuvers in Hawaii’s awe-inspiring beauty has been a spiritual experience for Lopez.

“It’s just like that poem, ‘High Flight’ by John Gillespie, where it’s like anytime he flies, like, you’re touching the face of God,” Lopez said, referring to the World War II-era Canadian aviator and poet.

The squadron commander also praised the maintainers who keep the F-22 safely flying.

“They’re out there sacrificing their blood, sweat, sometimes their tears, and their time just to get that pilot in the jet,” he said.

“When it all comes to fruition, when you pull back on the stick at rotate speed, you leave mother Earth, you see the ground getting smaller as you’re going up in the sky, you raise the landing gear handle, the doors close, and now you’re looking at Diamond Head [crater], at Waikiki [beach]. Do a right hand turn out on the departure, now you’re looking down on Ala Moana [beach], you’re looking essentially inside Diamond Head, and on a clear day, you can see Moloka’i, the Big Island of Hawaii, with [volcanoes] Mauna Loa and Mauna Kea, and West Maui, like, ‘Man, this is the best job in the world,’” he said. “It’s humbling, one, to wear the uniform, but then to also do it in this capacity of flying the aircraft, and just to be having that be my role on the team.”

Lopez was more contemplative when asked about the proposed retiring of 33 Raptors.

Before answering, he allowed a lengthy pause and looked down, his arms akimbo.

“My first thought was that thank God we have more Raptors to fly,” he said, jokingly.

“I would say that, you know, that decision is being made based on strategic vision that leadership has,” he added, because “… with anything in any organization, in order to advance the agenda, the vision, … sometimes a divestment needs to happen in order to create space for something else.”

The Air Force has not specified the exact upgrades that would be realized for the remaining F-22 fleet. However, indications are that the investment would go to upgraded sensors, electronic warfare, stealth coatings, and improved connectivity with F-35s, other aircraft, and satellites.

Pacific Air Forces Commander Gen. Kenneth S. Wilsbach said the proposed divestment would not impact his fleet, but he declined to address the overall decision.

“No, it doesn’t really hurt us,” Wilsbach told Air Force Magazine during a June 9 interview at his PACAF headquarters office.

Wilsbach regularly flies the F-22 himself and maintains the first flight suit locker visible upon entering the squadron locker room.

“It can maneuver, and it’s extremely fast, and has got fantastic stealth capability,” he said, describing the platform. “It has the capability of going toe to toe with anybody, same thing with the F-35.”

Lopez, meanwhile, hopes to one day achieve his F-22 dream.

“I’m still trying to find that perfect sortie,” he said.

“I want to have a flight so perfect, where I don’t make any mistakes,” he described. “The radio calls are pristine. I’m on altitude. I’m on airspeed. I’m in formation. I’m talking to the right radio, executing the tactics the way they’re designed to be executed, and I’m flying the jet to the best of my ability.”