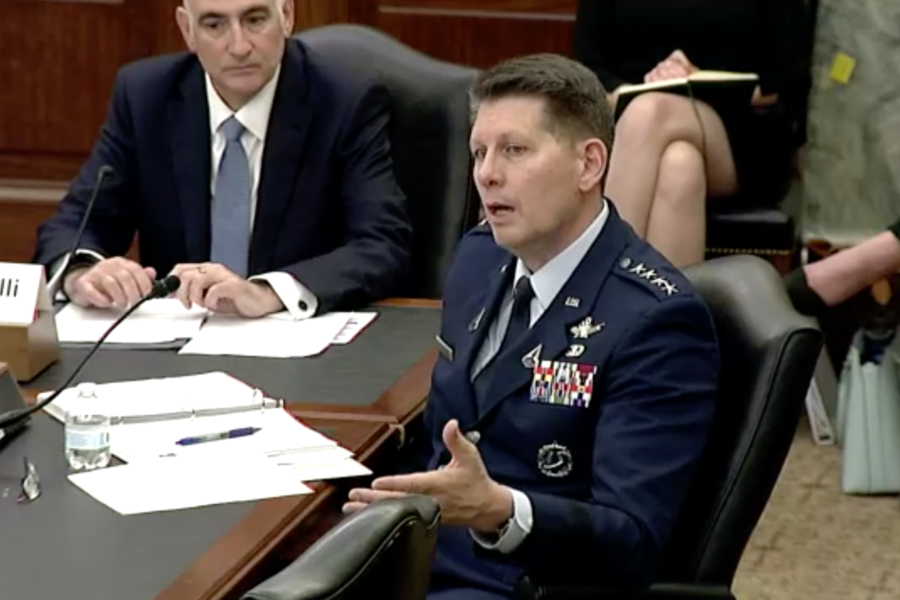 What Happens If GPS Goes Dark? The Pentagon Is Working on It, Space Force General Says

An F-35 is flying above the Indo-Pacific at 35,000 feet, when suddenly, the constellation of GPS satellites it relies upon for navigation goes dark. An adversary—either through a cyber or other anti-satellite attack—has taken down the system. What happens next?

That’s the question Sen. Angus King (I-Maine) asked of Vice Chief of Space Operations Gen. David D. Thompson during a May 11 hearing of the Senate Armed Services strategic forces subcommittee. And while the issue has been raised for years now, it’s one the Pentagon is increasingly concerned with, Thompson told lawmakers.

As space has become more crowded and more contested, the Space Force has advocated for proliferated, resilient satellite architectures. At the moment, though, the GPS constellation consists of just 33 spacecraft.

There’s no plan to replace GPS with a new program—Thompson emphasized that he expects the system to “remain the world standard for a long time.”

But at the same time, “while GPS is the world standard, it is perhaps fair to say that we’ve come to rely on it solely and exclusively and too heavily,” Thompson said.

In the hypothetical scenario King presented, the F-35 pilot would likely be fine, Thompson said—the Air Force trains its pilots on how to respond in GPS-denied environments, so their ability to keep flying is “generally assured,” Thompson noted, before adding, “Obviously, there’s likely to be a mission impact.”

To mitigate those impacts, the Department of the Air Force is working on projects “to augment [GPS], to supplement it, to provide additional means of being able to navigate and position and conduct missions,” Thompson said.

But it’s not just the Department of the Air Force—indeed, the entire Pentagon has come to see the issue of navigation as important.

“​​Inside all of the services—especially the Army is probably leading right now; the Navy is not far behind; but the Air Force as well—they’re looking at a host of technologies and methodologies for positioning and navigation,” Thompson said. “I would say probably inside the Department of Defense, I think we finally have enough people who have woken up to the fact that GPS is the world standard, will remain the world standard for a long time, but we have to be prepared for those who wish to deny us GPS and … be able to fight through that and be effective.”

Several years ago, the Navy made headlines when it brought back “celestial navigation” at the U.S. Naval Academy—navigating by the stars.

But while media coverage of that change mainly focused on the idea of returning to centuries-old navigation methods such as the sextant, Thompson indicated that new methods to complement GPS would still be high-tech.

“They’re developing techniques for celestial navigation automatically without a navigator, a human navigator, required—and frankly, to be able to do it in daylight, when the human eye can’t see stars. There’s technology in that regard,” Thompson said.

“Many years ago, onboard navigation, inertial navigation systems, were the way we conducted business in the ’50s and ’60s before GPS was rampant. It’s time to reinvest in those technologies and those capabilities, I think, to advance them. There’s even techniques that allow systems to measure the magnetic field of the Earth and based on the variations in the Earth’s magnetic field, figure out where you are, terrain mapping. There are a lot of ways to solve this problem.”

In 2020, the Army launched a new office and laboratory dedicated to the modernization of position, navigation, and timing. And in 2021, the Air Force’s Strategic Development Planning and Experimentation Office, alongside the Naval Surface Warfare Center, flight-tested new PNT technologies from open software architectures fused together.

Such moves, Thompson and King agreed, are necessary to build on moving forward.

“Somebody’s got to be thinking about this,” King said. “Because in a conflict, if I’m the adversary, the first thing I’m going to do is try to knock out GPS in order to blind us.”