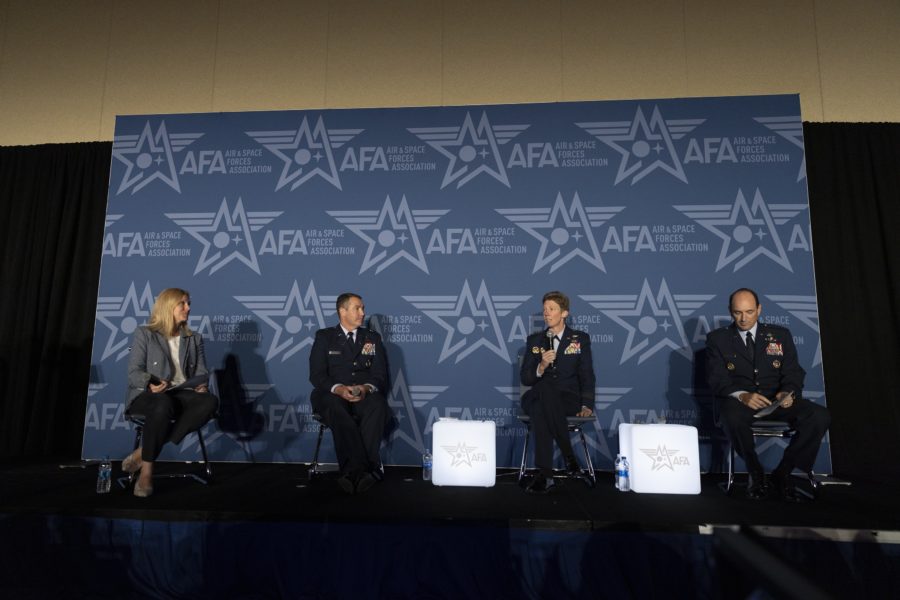 The United States is unprepared for a wartime fight with a peer adversary in the space and cyber domains, top U.S. generals said Sept. 20 at AFA’s Air, Space & Cyber Conference.

“The answer is no, we’re not ready,” Lt. Gen. Leah G. Lauderback, Air Force deputy chief of staff for intelligence, surveillance, reconnaissance, and cyber effects, said when posed the question by Lauren Barrett Knausenberger, the Department of the Air Force’s chief information officer.

At the end of 2015, the Chinese stood up the People’s Liberation Army Strategic Support Force (SSF). This newest part of China’s armed forces focuses on the “strategic frontiers” of space and cyber, including electromagnetic and information warfare.

Partially in response to these increased capabilities, the U.S. Space Force was created in 2019.

“As we pivot to China, what gives me concern is how fast they’re moving,” said Space Force Brig. Gen. Gregory J. Gagnon, the service’s director of intelligence, surveillance, and reconnaissance. “We have to tell that story. Because that’s the story that I think people who make resource decisions need to hear.”

According to Gagnon, the Chinese have over 260 satellites surveilling the Pacific.

“Why? To provide warning and to provide strike capability if directed by leadership,” he said.

The threat is a current one, not a distant prospect.

“We’re talking about the PRC, and Russia, and think about the spectrum of conflict. We clearly are in competition with both,” Lt. Gen. Kevin B. Kennedy Jr., commander of Air Forces Cyber, told a room of service members. “We’re being targeted. You, personally, are being targeted right now by our adversaries whether it’s via social networks, devices, or the information that you’re using to accomplish your mission.”

But the most concerning element of the Chinese SSF’s role has not been tested. The Department of Defense has a plan to connect all its data in a concept known as joint all-domain command and control (JADC2). The SSF’s brief is to be able to disrupt such a network.

The U.S. still has much work to do to protect and advance its electromagnetic spectrum operations, a key pillar for an interconnected military.

“We are nowhere near where we need to be with that,” Lauderback said. “We are just starting the sprint with the acquisition community and with the operational community. … It is something that we do not have a deep bench on at all. And we’ve got to do it.”

Kelly: Take an Iterative Approach to Collaborative Combat Aircraft or Risk Getting it Wrong

The Air Force should take a rapid but iterative, building-block approach to developing the concept of Collaborative Combat Aircraft--uncrewed airplanes that will aid the crewed ones with sensing, jamming and carrying weapons--or it may get the concept expensively wrong, Air Combat Command's Gen. Mark D. Kelly said Sept. 21. It's…