Skip to content
Student pilots undergo altitude chamber training May 18, 2021, at Laughlin Air Force Base, Texas. The altitude chamber is one of the first steps of training for all new pilots and aircrew to demonstrate and know the symptoms of hypoxia. Air Force photo by Airman 1st Class David Phaff.
Expand Photo 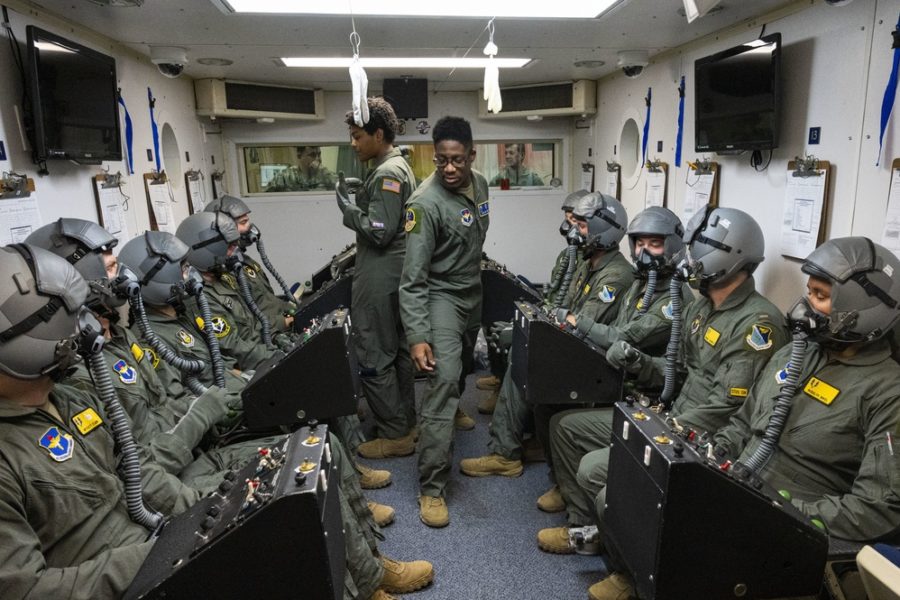 Watchdog: Air Force is Tackling In-flight Physiological Issues But Can’t Fix Them All

The Air Force is working to improve safety and reduce pilot physiological events in some of the aircraft most commonly cited for those issues, but the service can do only so much to reduce risk due to human error and the “hazards inherent to the aviation occupation,” a new report from the Defense Department’s Inspector General states.

That assessment stands in contrast to what Col. Mark Schmidt, then-lead of the Air Force Physiological Episodes Action Team, told Air Force Magazine in December 2020, saying, “the objective is to drive physiological episodes to zero.”

The audit of the Air Force’s actions taken to mitigate physiological events from the Pentagon’s IG examined four aircraft specifically—the F-15C, the F-15D, the F-15E, and the T-6A—after identifying them as the fighter and trainer aircraft with the highest reported rates of physiological events, defined as “any injury, illness, or abnormal physiological condition experienced by aircrew or others because of the flight environment.”

The report, released Sept. 2, states that the Air Force has managed to close 47 of 79 recommendations resulting from investigations of mishaps to reduce physiological events in the four aircraft, while also conducting 67 research studies since 2010 on the topic.

Many of the physiological events studied were related to a lack of oxygen, a condition called hypoxia that can result in cognitive impairment, slow reaction time, feeling dizzy or lightheaded, difficulty concentrating, and tingling or numbness in the extremities.

It’s an issue that has received increasing attention over the past few years. In 2012, the Air Force launched a large-scale investigation into breathing problems on board the F-22 Raptor, where pilots said they sometimes even blacked out at the controls due to lack of oxygen. Data from the Inspector General’s report captures the scale of that problem, with 57 combined physiological events reported in the F-22 in 2011 and 2012, compared to 33 total from 2013 to 2020, after the service began fixing several identified problems and installing backup oxygen systems in every jet.

But while the F-22 has improved, other fighters have experienced more issues. The T-6A trainer has had the most high-profile problems, leading to a grounding of the fleet in 2018 after a surge in hypoxia-like events. Since the Air Force has said it plans to redesign the oxygen system and adjust oxygen control levels in flight, the reported rate of events has dropped by more than half, the DOD IG found. But in both 2019 and 2020, the rate of physiological events per 100,000 flight hours was still higher than 25, compared to 6.63 in 2010.

The inspector general’s report did note that “because the T‑6A Texan II is the first aircraft flown by Air Force aircrew, the nerves of the aircrew could be a factor in the increase of reported” events.

Still, the report found that most of the recommendations resulting from Air Force investigations and studies conducted by the service’s 711th Human Performance Wing have been related to the T-6A—51 of the 79 total recommendations have had to do with the aircraft, and there have been nine research studies on it since 2017 alone.

The two planes that saw lower reported rates of physiological events in 2020 compared to 2010 were the F-15C and F-15D. But the report did note that “the reductions were not consistent each year across all reviewed aircraft,” with a significant increase reported for those two planes in 2015 and 2016.

In response to that surge, the Air Force established an independent review team to study the root causes. That team issued recommendations that led to the Air Force’s F-15 system program office implementing new maintenance procedures to better respond to reported hypoxia events, installing a new, digital cockpit pressure monitoring and warning system in the fighters, and upgrading and replacing canopies and canopy seals after reports of leaks.

In addition to fixing issues with the aircraft, the DOD IG’s report found that the Air Force has implemented training to help pilots and aircrew identify and prepare for physiological events, starting with Undergraduate Flying Training but including periodic refreshers.

While the inspector general’s office offered no new recommendations as a result of its audit, the issue of physiological events is unlikely to die down anytime soon. In its markup of the 2022 National Defense Authorization Act, the House Armed Services tactical air and land forces subcommittee included a provision requiring the Defense Department to investigate issues and compile a report on the pilot breathing system of the F-35. That requirement came just a few months after NASA conducted its own study on pilot breathing issues, mostly in the F-15 and F/A-18, but also in the F-35.

After just three reported physiological events for the fifth-generation fighter during its first four years flying in the Air Force, there have been at least three events in the F-35 every year since, according to the DOD audit.