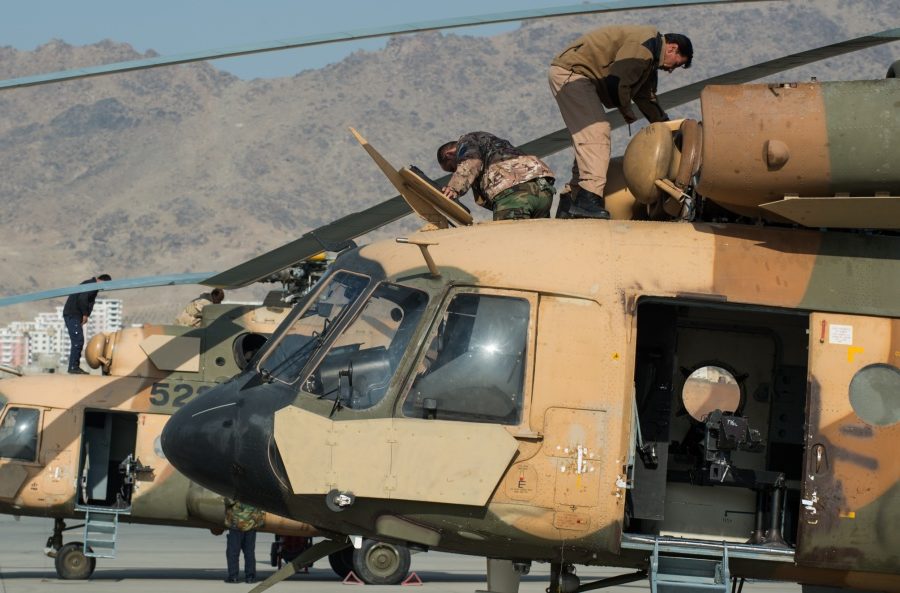 The office of the Special Inspector General for Afghanistan Reconstruction on July 28 released its latest quarterly report to Congress, detailing several issues facing the health and effectiveness of Afghan forces. The AAF, long touted as one of the few success stories in the U.S.-led training mission, has been key to Afghan military capabilities. But that is waning as U.S. contractors leave and advisers are already gone from the country.

“Five of the seven airframes experienced decreases in readiness in the last month of the quarter [June],” wrote SIGAR’s John Sopko. “This coincided with the Taliban offensive and the withdrawal of U.S. and Coalition forces, including aircraft-maintenance contractors. The combined effect of the two appeared to reduce aircraft readiness rates.”

Specifically, the AAF’s AC-208 fleet had a 93 percent readiness rate in April and May, but that dropped to 63 percent in June. The UH-60 Black Hawk fleet went from 77 percent to 39 percent. The A-29 light attack aircraft and MD-530 attack helicopter, both key to striking Taliban fighters in the country, failed to meet readiness benchmarks.

It is not clear how the AAF can regain some of this readiness as contractors have left. Sopko said during a July 29 roundtable with reporters that AAF crews are a success story, showing they are “not only brave, but as competent as they could be,” but there are small numbers of them. More cannot be trained overnight—both pilots and mechanics need months to be trained.

U.S. officials have said they will continue supporting the AAF through funding and remote advising from over the horizon. Sopko said, however, that how that will occur it isn’t clear yet and that there will be limitations in effectiveness.

“You’ve got to be there sometimes, to help somebody with maintenance, or training, or whatever,” he said. “And it’s extremely difficult. … It’s a lot better, I personally feel, when you’re face to face and when the Afghans are face to face.”

Additionally, how in-depth maintenance will occur isn’t clear. Needed maintenance is possible, though difficult and expensive, to do out of the country. For example, if a helicopter engine needs to be fixed, it could be flown out of Afghanistan, fixed elsewhere, and then flown back in.

Afghan special forces—the other success story in the Afghan military—also are stretched extremely thin. Commandos are tasked with basic jobs that regular forces should do, such as route clearance and checkpoints, because regular Afghan army soldiers refuse to conduct operations if the special forces are not there, Sopko said.

Congress created SIGAR in 2008 to conduct oversight of reconstruction projects in Afghanistan, and Sopko has held the position since 2012. He has overseen dozens of reports outlining lessons learned, effective and ineffective projects, and other topics for Congress, and as the war winds down, he cites a lot of lessons learned for the military and the country at large.

Throughout the war, for example, the U.S. military was too focused on short-term goals for leaders who rotate in and out of the country as opposed to long-term efforts. The military went into Afghanistan thinking it could create a strong central government, but that was a “mistake.” The Pentagon poured money into the country, which created waste and corruption, and alienated the Afghan people without effectively supporting the military.

U.S. leaders in Afghanistan didn’t focus enough on logistics, and every time a problem arose in the development of the Afghan military, “we changed the goalposts on how we were rating them,” he said.

Sopko said he has two words that can describe the mission in Afghanistan: “One is this ‘hubris’ that we can somehow take a country that was desolate in 2001 and turn it into a little Norway in [a short] timeframe. And the other thing is ‘mendacity.’ You know we exaggerated, we over-exaggerated, our generals did, our ambassadors did, all of our officials did, to Congress and the American people about, ‘We’re just turning the corner, we’re about ready to turn the corner.’ … Many of our generals talked about ‘just about ready to win.’ Well, we turned the corner so much, we did 360 degrees—we’re like a top.”

With the withdrawal almost complete, Americans need to understand what went wrong in Afghanistan, Sopko argued. Over the past 20 years, the U.S. undertook a redevelopment program in the country that was bigger than the Marshall Plan after World War II, and he expects something similar will happen again in the future.