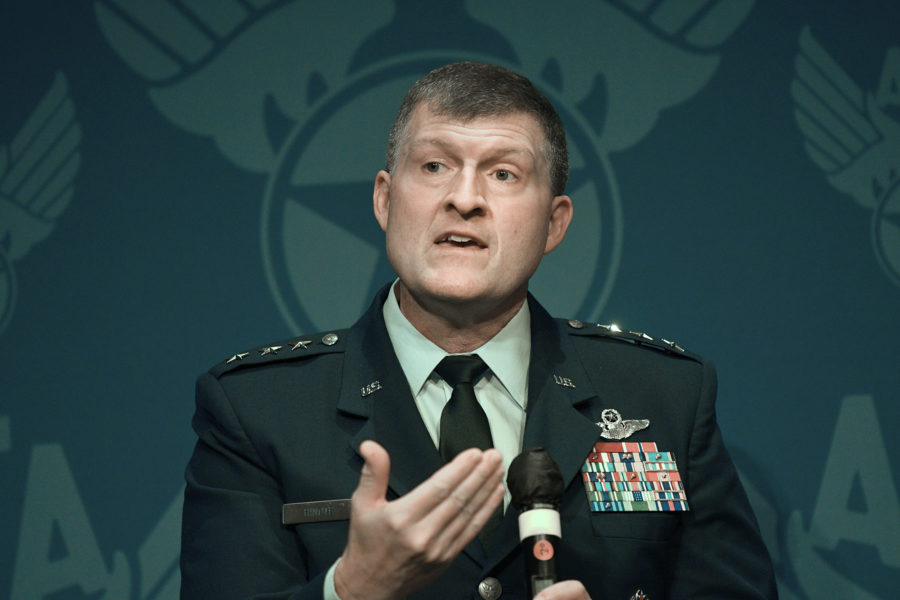 The Air Force’s mantra under Gen. Charles Q. Brown Jr. has been to “accelerate change or lose,” but the most recent wargaming indicates, so far, the latter, according to Lt. Gen. S. Clinton Hinote, the Air Force’s futurist. The corrective action is to speed up the deployment of large numbers of unmanned systems and to proliferate operating locations to complicate an enemy’s decision-making, he said.

“Unfortunately, the wargaming says that we’re not accelerating our change fast enough,” said Hinote, the deputy chief of staff for strategy, integration, and requirements, during a webinar hosted by the Center for a New American Security. Brown’s mantra is proved right by the outcomes of recent exercises—about which Hinote did not elaborate—saying, simply, “We’ve got to go faster.”

He noted that the Air Force “used to” think it had until 2030 or so to achieve its evolution but now sees the need to get to a new posture by around 2027, given the advances being made by China and other potential adversaries. That horizon makes it “more difficult to imagine” starting new systems now that will be ready by then, making an imperative of connecting the equipment already in hand, he asserted. The short timeline also puts a priority on training, he said, which will make “a huge difference there.”

Hinote said the Air Force has recently opened up some of its exercises to Capitol Hill staffers and members of Congress, allowing the stakeholders to “help us shape the game, and we took the results back to them to show them what happened.” It’s “one of the ways of helping us tell the story of the change we need and the fact that we need to get after it faster,” he said.

The Air Force has pitched Congress to allow the retirements of legacy platforms and systems that are no longer relevant in order to free up manpower and funds for new systems, but Congress has been skeptical so far.

The Air Force is now looking to large numbers of unmanned aircraft as one way to achieve the combat power needed without the expense of building every airplane with a seat, displays, and an escape system for a human operator. The profusion of airborne targets, he said, will make an adversary’s job harder and make it easier for USAF to achieve air superiority at the time and place of its choosing. Hinote did not mention the Next-Generation Air Dominance, or NGAD, system as central to this mission.

The service will soon be doing experiments to examine “what does a unit of combat power look like?” he said. “If they’re flying all of these small unmanned aircraft around … to accomplish different things?” he continued. “I don’t know what that looks like, yet. … We need to experiment with that and exactly how to build those units.” However, he called the work “exciting … because we get a chance to shape that for the next generation of Airmen.”

Air superiority has become “much more challenging,” Hinote said, and “it will require us to think differently than we have in the past.” In fact, “I have a lot of trouble with” the idea of perpetual air dominance. For while total air control was a “prerequisite” to almost all military operations, but Hinote said, “I don’t see [that] as a viable thing to try to establish.” New thinking will be needed about “how we’re going to penetrate into those contested areas and how we’re going to create that effect of air superiority.”

The Air Force will have to put more thinking into defending the homeland from air attack and projecting forces forward to protect allies, he said.

“We are going to have to … reimagine air superiority for the next 40 years,” he said.

Hinote expounded on the need to multiply operating locations to complicate the enemy’s targeting problem, saying the Air Force will transition toward a force that increasingly will be “runway independent,” taking advantage of unmanned systems that can launch from a vehicle or patch of ground using “rocket-assisted takeoff” and recover by parachute, and aircraft that can take off and land either on a short runway or road, or vertically. He said the service must evolve from being concentrated on three or four bases to “tens … to thousands.”

“The best way of defending yourself, … given all the firepower an adversary like China could bring to a fight, is you’ve got to disperse; you’ve got to spread out; you’ve got to be able to take a punch to the point where they can’t concentrate on just a few targets.” That translates to more bases and more—smaller—formations, he said, where decision-making is in the hands of people on the scene applying commanders’ intent, especially if communications are interrupted, as they likely will be.

Adversaries have learned to make their crucial assets, such as air defenses, mobile, and now the Air Force must adopt that mindset as well, Hinote said. “We want to create that same issue for them.”

A Strategy of Denial

The Air Force will apply a “strategy of denial” in its future deployments, he said. “It’s going to be very important for us to create power projection capabilities that can survive and defend in those very contested areas, which means they need to be different than they were before,” he asserted.

Underlying it all will be joint and multi-domain operations, where decision-makers can view agnostically provided intelligence then choose from which domain an effect will be delivered. This, too, will complicate an adversary’s planning and posture, he said.

The service has said little about its AIM-260 successor to the Advanced Medium-Range Air-to-Air Missile, used for dogfighting, except that it’s meant to redress the advantage that China has with its long-range PL-15 missile. The Air Force is buying the stealthy Long-Range Anti-Ship Missile (LRASM) in small quantities and has talked about using directed energy systems to spoof or destroy surface-to-air missiles.

“The F-35 of the future will be very different from the one we’re buying today,” Hinote said, as it will have far greater sensing and communicating capabilities to populate a combat cloud of data that all combatant commands will be able to “pull” from. He also said he believes allies should be trusted with far more data and intelligence than they are now, to help them do better in a coalition fight.

The F-35 will be key to creating the data sphere that unmanned aircraft, with artificial intelligence, will use to accomplish their missions, he said.

“Use humans to do what humans do best, and I have a feeling that’s going to change a lot of things,” he said.

Hinote also asserted that small companies—new entrants in defense—will be needed to build the numbers of unmanned aircraft the Air Force will need, with the traditional primes still having “a huge role to play” building “those very military-specific things that really only they can do.”

But the smaller vendors are “an incredibly interesting part of the industrial base” that can make platforms inexpensively with “the potential to produce large amounts of … unmanned aircraft, autonomous collaborative platforms,” Hinote said. “That would be a defense industrial base really worth building, and we’re hoping to see that.”