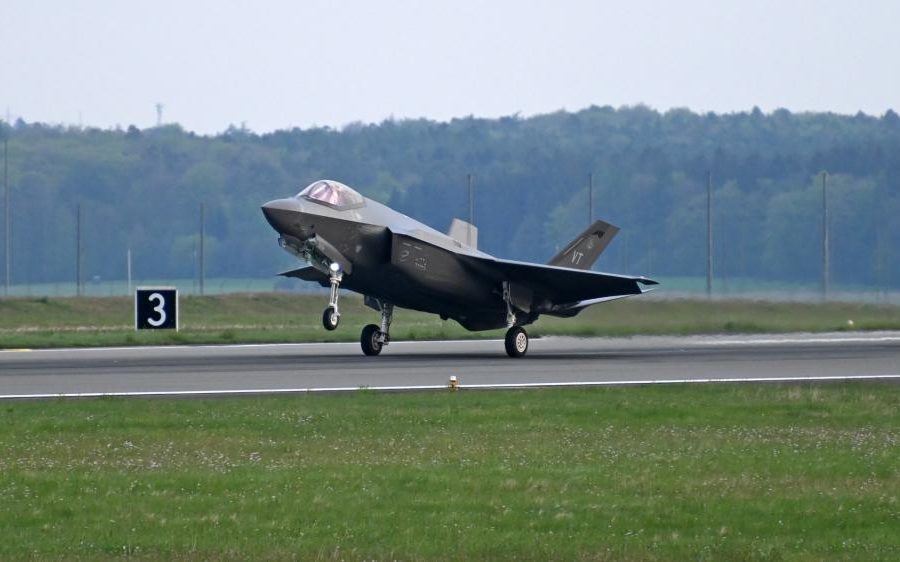 Airmen from the 158th Fighter Wing departed from South Burlington, Vt., on April 29, and the F-35s landed at Spangdahlem Air Base, Germany, on May 2, according to Air Force releases.

At Spangdahlem, the fifth-generation fighters will replace six F-35s from the 34th Fighter Squadron at Hill Air Force Base, Utah, that arrived in Europe in February in response to Russia’s increasing aggression toward Ukraine and NATO’s eastern flank.

Since then, Russia’s invasion of Ukraine has sparked a crisis across the continent, and the Air Force has deployed F-35s, F-16s, F-15s, and B-52s throughout Eastern Europe.

As the invasion has dragged on for longer than expected, however, USAF has started to rotate new aircraft and Airmen into the region to relieve that first wave of deployments. F-16s from Aviano Air Base, Italy, recently landed in Romania to switch places with F-16s from Spangdahlem.

The Associated Press reported that eight F-35As and more than 200 Airmen from the Vermont ANG are now in Europe. That marks a fast turnaround for the group, which is just a few months removed from becoming a fully operational F-35 unit. All told, the 158th FW has 20 F-35s, the last of which was delivered in 2020. Vermont is the first Air National Guard unit to receive the F-35.

“Being called upon only four months out of conversion to an operational F-35 fighter wing is a testament to our team, their professionalism, commitment, and proven capabilities,” Col. David Shevchik, commander of the 158th Fighter Wing, said in a statement. “It is when we are needed most that we are at our best. The Green Mountain Boys are ready and proud to answer this call, and we’re grateful for the support of our families, employers, and communities.”

The F-35 has played a key role in the Air Force’s response to Russia’s aggression. The Hill F-35s flew hundreds of sorties as part of NATO’s air policing mission, sometimes scrambling in response to Russian aircraft that violated international norms in air space near Poland. And top officials have said they’re watching the airframe’s performance closely.