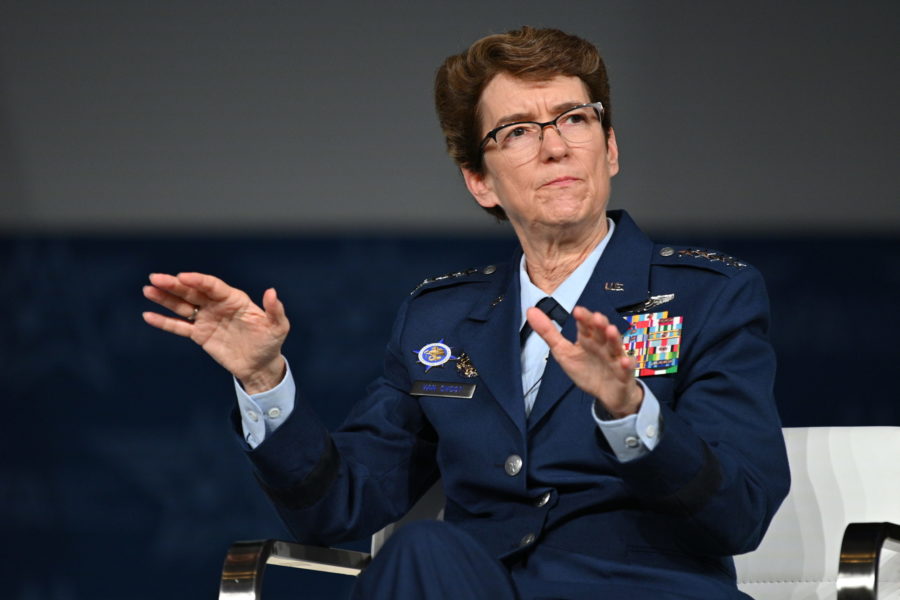 Van Ovost: Time to Invest in Next Generation of Tankers, Airlifters

The Air Force needs to start investing in its “next generation of strategic mobility and refueling assets,” U.S. Transportation Command boss Gen. Jacqueline D. Van Ovost said Sept. 20—and that means replacing the two pillars of those respective fleets.

“The C-17 has demonstrated its merits countless times, but the last one was delivered to the Air Force in 2013,” Van Ovost told reporters at AFA’s Air, Space & Cyber conference. “When we receive the last KC-46 at the end of this decade, we will still have hundreds of Eisenhower-era KC-135s in our fleet that must be recapitalized.”

In June, the Air Force sent a request for information to the aviation industry launching the Advanced Aerial Refueling Family of Systems (AAR FoS) program. The program, intended to develop new and existing technologies to go on both current tankers and future ones, detailed some of the attributes it needs, including connectivity, survivability, and increased situational awareness.

Van Ovost called those required attributes “heartening” and detailed how TRANSCOM helped shape them with its own studies.

“We’ve been working with [U.S. Indo-Pacific Command], PACAF in particular, on how we would employ those airplanes … and what environment they will be in and what we’re refueling,” Van Ovost said. “It really sort of calculates what kind of airplanes we need, and in what positions.” The simulations also show whether “you can modulate how much more fuel they take; or if they take less fuel, would they have this or that, [and] what value would that be to the battlefield.”

Air Mobility Command, the Air Staff, and the Office of the Secretary of Defense receive the results of those sturies, Van Ovost said, and will help inform the requirements for the service’s KC-Y “bridge tanker” and KC-Z programs. Requirements for KC-Y are set to be unveiled this fall, while work on the KC-Z future tanker begins in 2023, officials have said.

Van Ovost also detailed some of the capabilities she believes future tankers will need.

“I can tell you, spoiler alert, it’s got to be connected like the KC-46,” Van Ovost said. “Gone are the days where you can just go out there and go to an anchor orbit and just wait for someone to come. It has to be connected and have some sort of battlespace awareness, even if it’s MacGyvered on … because that is key to survivability.”

On top of that, maneuverability will matter so that the aircraft can be “in the fight, literally linked to everybody so that it can be of more value,” Van Ovost said.

And if tankers are in the fight, they’ll need some form of defense.

All of those requirements, however, aren’t locked in, and Van Ovost said TRANSCOM will likely conduct wargames to test them in “more of a final stage.”

While the push to replace the 60-year-old KC-135 has been going on for years now, the C-17 Globemaster III is relatively new in comparison, and the Air Force hasn’t sought to cut its fleet.

But while the average C-17 is decades younger than the KC-135, the airlifter has been used hard—with no obvious immediate successor.

“It’s been critical to the fight. But I’m aware that we’re using them a lot, and there are no [active production lines] for a capability like that—a roll-on, roll-off kind of capability” versus lifting, Van Ovost said of the C-17. “It makes a huge difference for throughput if you can roll on, roll off an airplane.”

Van Ovost also noted that the C-5 Galaxy, the Air Force’s largest airlifter, isn’t “getting any younger, either,” heightening the importance of keeping the C-17 fleet airworthy.

The Air Force has articulated plans to keep the C-17 in service through the 2050s—but Van Ovost suggested that TRANSCOM is already looking ahead to its successor.

“We need to be able to … consider in the concepts looking forward, how much stuff are we moving forward, what kinds of stuff, and what kinds of capabilities that airplane will need?” said Van Ovost. “So as we do these studies, we keep the airlift in the fight, and we keep pushing to the Air Force and refreshing what we think the next airlifter should look like.”

What exactly that will be, Van Ovost didn’t say. But she did point to the Air Force’s operational concept of agile combat employment—emphasizing smaller teams of multi-capable Airmen who can operate in remote or austere locations—along with similar ideas from the other services, as what will “really define” the aircraft’s requirement.