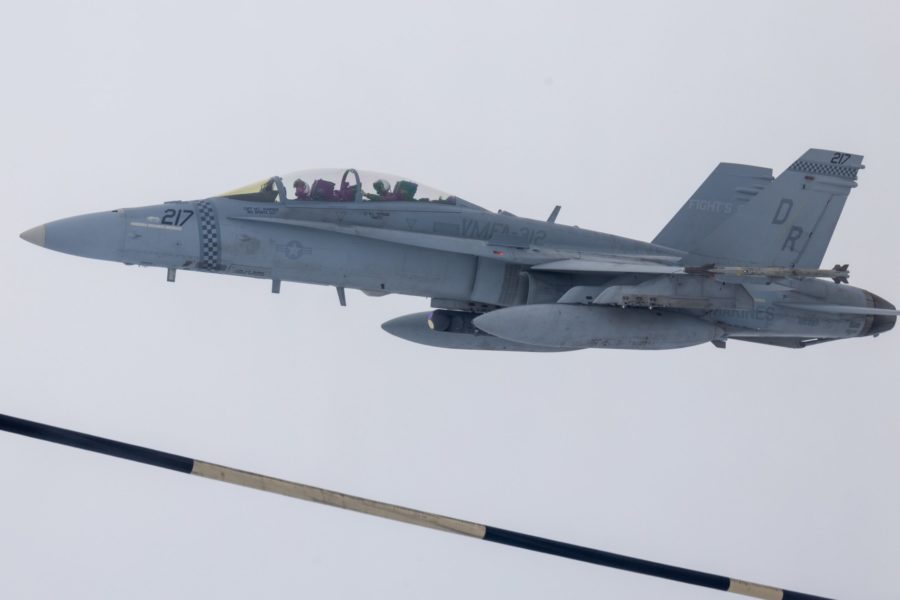 LASK AIR BASE, Poland—Marine Corps F/A-18 Hornets had no sooner finished a six-week deployment in the Arctic before a real-world contingency required them to redeploy to NATO’s eastern flank.

“We were best suited based on our readiness and proximity,” said executive officer Maj. Tyson Griffith, speaking to Air Force Magazine on a windy flight line here as ice crystals circulated in the air.

“We haven’t done it before, but we’ve been trained to these things,” Griffith said of the Air Policing mission. “Guys are excited to do non-training stuff to put into action everything that we’ve been preparing for.”

In early February, President Joe Biden quickly ramped up deployments to NATOs eastern flank to reassure allies, moving F-15Es from RAF Lakenheath and Seymour Johnson; F/A-18s from Aviano Air Base, Italy; F-16s from Spangdahlem Air Base, Germany; and F-35s from Lakenheath and Hill Air Force Base, Utah, for a show of air power on borders with Russia, Belarus, and Ukraine.

American aircraft do not have a dedicated hangar at Lask, instead lining up in two perpendicular rows along the flight line. The adjustment means three-hour crew rotations for maintainers working with bare hands in the whipping wind and freezing temperatures.

The 10 multirole jets and 24 aircrew members fly four sorties a day, two F/A-18s per mission of two to four hours each, with instructions handed down from the NATO Combined Air Operations Center (CAOC) at Uedem, Germany.

The first pair of jets sometimes depart from the tree-shrouded airfield in total darkness as early as 3:30 a.m. The squadron is refueled by its own KC-130J, also deployed to Lask, from USMC Aerial Refueler Training Squadron 252, Marine Corps Air Station Cherry Point, N.C.

“It’s definitely kind of unprecedented, but the Marine Corps, this is what we train to all the time,” said weapons system officer Capt. Heather Hamilton, who sits in the back seat of the F/A-18D.

In combat, the weapons officer provides close air support, while in Air Policing she is using the feed on her screen from the jets’ sensors to identify aircraft in the area of operations.

“Is that a friendly airliner? Is it another NATO aircraft, or is it possibly an adversary aircraft?” she said over the sound of a KC-130J powering up for takeoff in support of an afternoon mission. “That’s my job in the backseat.”

Unlike U.S. Air Force units commuting three hours from Spangdahlem Air Base, Germany, to various sites on the NATO eastern flank, the F/A-18s flying from Lask Air Base, Poland, stay exclusively in Polish air space, some 60 miles east of the base. That positions them inside 200 miles of Brest, Belarus, an airport near the tri-border of Poland-Belarus-Ukraine that Russia has used to shell Ukraine. Brest also sits some 190 miles north of Lviv, in western Ukraine, which came under attack from the air again April 18.

The Marine Corps mission in Poland requires regular communications with Polish NATO allies and follows the interoperability practiced at Cold Response, where Marines worked with a range of allied nations for the six weeks of preparation and exercises. During that operation March 18, four Marines in a V-22 Osprey died in a crash that is still under investigation.

Operations in cold weather are still a challenge, causing a different set of problems for aircraft.

“Our components aren’t used to the cold weather as much,” said airframes mechanic Sgt. Thomas Garcia, who works on landing gear, hydraulics, and flight control surfaces with his bare hands in the cold Polish springtime.

“It gives us a better chance to understand how the aircraft works in a cold environment so we can prepare ourselves for the future,” Garcia said.

“We’re kind of excited that we’re here right now,” he said, reflecting on NATO’s mission in Poland, so close to the war in Ukraine. “This is one of those moments where we already know what to do, and we have to do it.”