Skip to content
U.S. Africa Command said these Russian aircraft are being used to support private military companies sponsored by the Russian government. “We know these fighters were not already in Libya and being repaired,” said Col. Chris Karns, the command's director of public affairs. “Clearly, they came from Russia. They didn’t come from any other country.” AFRICOM image.
Expand Photo 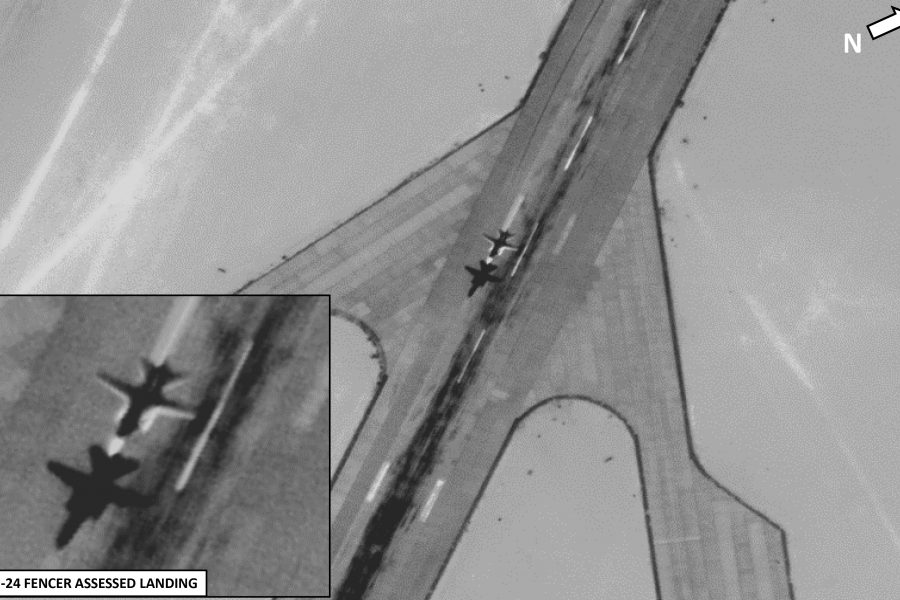 Private Russian contractors are continuing to build up their presence of fighter jets in Libya, raising concerns about long-term security impacts of this capability and short-term worries about the skills and professionalism of fighter pilots for hire.

U.S. Africa Command on June 18 released new images of at least 14 Russian MiG-23s, MiG-29s, and Su-24s that Russia had repainted and deployed to al Jufra Air Field in Libya in May. The aircraft are reportedly flown by the Wagner Group in support of military commander Khalifa Haftar’s offensive against the United Nations-backed Government of National Accord. In addition to the aircraft, the air field also now has a Spoon Rest mobile early warning radar system, according to AFRICOM, which says the deployment violates a United Nations arms embargo.

Gen. Jeffrey Harrigian, commander of U.S. Air Forces in Europe-Air Forces Africa, told reporters June 18 the U.S. assesses that right now the aircraft are primarily flying training sorties. While there’s been some reported strikes near the city of Sirte, the U.S. has not been able to confirm this specifically.

“I would tell you that largely what they’ve been doing is working on what I would call pilot proficiency,” he said, raising the question of “what kind of experience [do] these guys have, and what would that lack of experience mean from a tactical employment perspective?”

The assessment is that the Wagner Group contracted retired pilots or others who have some experience in the aircraft but are not currently proficient.

“So naturally, from a professional Airman’s perspective, that’s going to raise some concern,” he said. “It ought to raise concern in everybody’s mind in terms of what’s their ability to put weapons on the appropriate targets to ensure that they’re getting after whatever specific target entity that they are attempting to put a weapon on.”

This raises the risk of civilian casualties, especially in populated areas such as Sirte. Strikes in those locations require precision weapons and extensive training, he said.

“When you haven’t had, potentially, the opportunity to operate with precision weapons in a manner that’s going to require tactics, techniques, and procedures [and] a skillset that, you know, we train significantly to ensure that we put the weapon where we need to,” he said. “That’s an area that we have concern, and I think rightly so. So, that is something that should be watched as we go forward here.”

The Wagner Group is showing “intent to have a better understanding of the air domain” and to use the jets to influence the outcome of Haftar’s fight against the GNA, he said. However, the current deployment does not include surface-to-air capability.

“As far as any buildup of integrated air defense, from a surface-to-air missile capability, we haven’t seen any of that thus far,” he said. “My concern has been that should Russia gain a more permanent foothold, as they have demonstrated with what they’ve done in Syria, that’s going to be a significant security concern to our European flank to the south.”