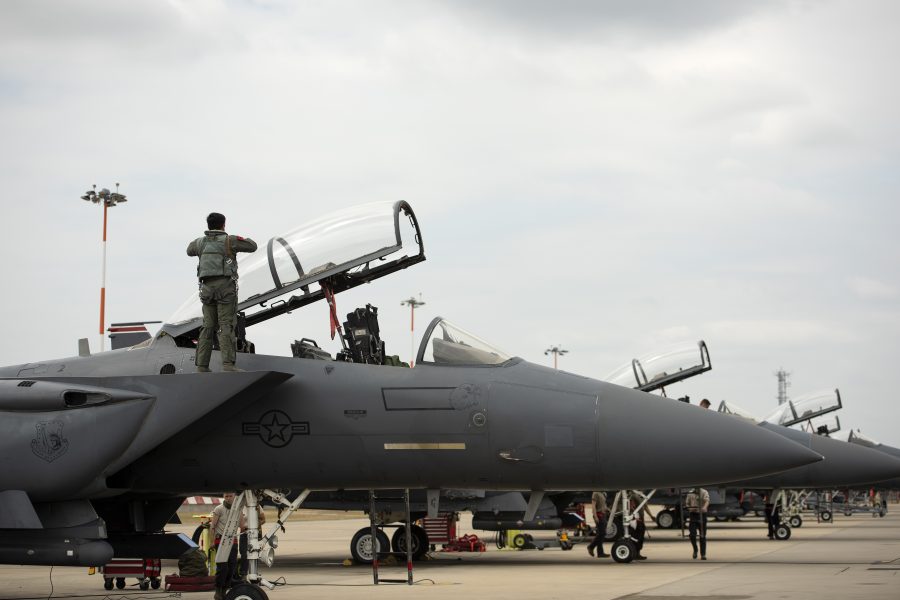 The sky above the North Sea in Europe filled with dozens of USAF aircraft on May 27 as fighters from multiple bases joined together in red vs. blue teams to prove that U.S. Air Forces in Europe crews are ready for a high-end fight, even as the COVID-19 pandemic forces the command to change its schedule.

Since the outbreak began, USAFE has canceled or suspended 14 exercises, leaving a shortage in its crews’ ability to train at a high level outside of their own local airspace. The May 27 “large force employment” event is the culmination of about a month and a half of planning led by RAF Lakenheath, England, to “sharpen combat readiness” across fourth-generation fighter crews at three USAF bases, said Capt. Nathan Hartoin, the chief of weapons at the 48th Fighter Wing who planned the mission, in an interview with Air Force Magazine.

All told, 38 aircraft came together, including F-15Cs and F-15Es from Lakenheath; KC-135s from RAF Mildenhall, England; F-16s from Spangdahlem Air Base, Germany; F-16s from Aviano Air Base, Italy; a NATO E-3 AWACS; and the 603rd Air Operations Center at Ramstein Air Base, Germany, monitoring the action. Planners and aircrews, because of travel restrictions and social distancing guidelines, met virtually to plan the training event and debrief. Maintainers split into shifts and worked to get aircraft ready.

“This is really the first large-force exercise that I know of, since COVID started,” said Capt. Alex Travers, the 52nd Fighter Wing’s electronic combat pilot who flew in the exercise. “All things considered, with the displaced planning and different units coming together for the first time in several months, it went off very well and we got some great training out there. There’s nothing like being at 1.2 Mach and 30,000 feet, and looking over and just seeing all the contrails and thinking: This is America out here. This is awesome. So, I had a great time today.”

For the May 27 scenario, each fighter base launched two teams of aircraft—a friendly force and aggressor force—for a defensive counter air mission. Since the planning for this event was led by Lakenheath, which has more of an air superiority mission compared to Spangdahlem’s suppression of enemy air defense mission, the scenario focused on defensive counter air.

The North Sea airspace is over water and less trafficked than other ranges in Europe, giving fighters the chance to fly lower and faster. It was broken up into a fighting space and an area for KC-135s to fly refueling tracks.

“Something I don’t see very often are three KC-135s, 707s, all stacked up within 500 feet and in a mile of each other. Each one of those has four F-16s on it,” Travers said in an interview. “Really, that’s an impressive scene that you might see in Desert Storm photos from the early ’90s. For the KC-135 pilots and the guys doing the tanking, that’s valuable training for them.”

The NATO AWACS flew around the edges. Its controllers, who regularly control four to eight airplanes per day, were responsible for more than 30 aircraft. “Across the board, I would say people were pushed harder today than they normally do on a daily basis,” Travers said.

Using the aircraft’s targeting pods and training equipment, the F-15s and F-16s in the fighting zone split into teams, with the blue team defending the area from the attacking red force. The scenario wasn’t focused on preparing for a specific threat from one country, but instead about getting the different aircraft and pilots together to train, said Capt. Michael Shaw, an F-16 pilot with the 510th Fighter Squadron at Aviano who helped plan the exercise. Since the outbreak began, Aviano crews have largely been flying together, and this was a chance to break out of that mold.

“We know the airspace round here, we know the ins and outs of what the threat capabilities are, of what we can actually replicate here at Aviano. But going to a different airspace, from the aviation perspective, … or refueling multiple times in the air, adds a whole ‘nother layer of complexity to it,” Shaw said. “… When you are fighting F-16 versus F-16, you get really used to that routine. So, to change it and actually get to see what other platforms are executing to, is greatly beneficial to our training.”

For about an hour, the fight raged over the North Sea before aircraft returned home for a debrief on who won and how effectively the pilots fought.

“What we’re able to do is essentially play laser tag at Mach one and 30,000 feet,” Travers said. “So, all the simulated missile shots that were taken were recorded and now in the debrief, what we’re going to do is we’re going to basically run through the entire mission … and we’re going to see who actually shot, who was killed, and who survived, and that will allow us to answer the first question, which is: Did we win today?”

The mission took place at a time when the military is limiting travel and following social distancing guidelines, which raised some challenges, though it also provided a unique experience. For example, the teleconference mission planning for crews in different locations is something that aircrews deployed to the Middle East regularly experience.

“The goal of this was to integrate across multiple platforms, multiple fighters in this case, to … get into some contested, degraded operations where we can essentially go to another airspace where we’ve never met the people, in person, that we’re fighting with, and actually integrate with them and apply our joint tactics and doctrine with those guys, without having to be physically present for the mission planning,” Shaw said.

The pilots flying included ones who needed upgrade training, currency requirements, or were preparing for the U.S. Air Force Weapons School. Outside of meeting requirements, just the overall experience of flying with different airframes from different bases helps aircrews improve, said Maj. Sean Foote, the chief of weapons and tactics at the 52nd Fighter Wing.

“The experience of the mission planning cell, so getting all [38] aircraft on the same page with the fighters, talking to the AWACS, talking to the tankers, and getting the plan together, and then just the actual scenario,” Foote said. “The integration between the different Air Force platforms, and then adding on top of that the time in the seat and the hours, both in the planning cell and the actual live-fly execution, it’s a pretty well-rounded takeaway for everyone.”

USAFE expects exercises like this one to become monthly, with the 52nd Fighter Wing at Spangdahlem in charge of planning the next one. While Lakenheath’s plan focused on its defensive counter air mission, the 52nd FW’s iteration will focus on suppression of enemy air defenses with more of an air-to-ground emphasis in its nearby range, Travers said. This exercise is tentatively scheduled for the last week in June, with the same wings expected to participate and possibly other NATO nations getting involved in the future.