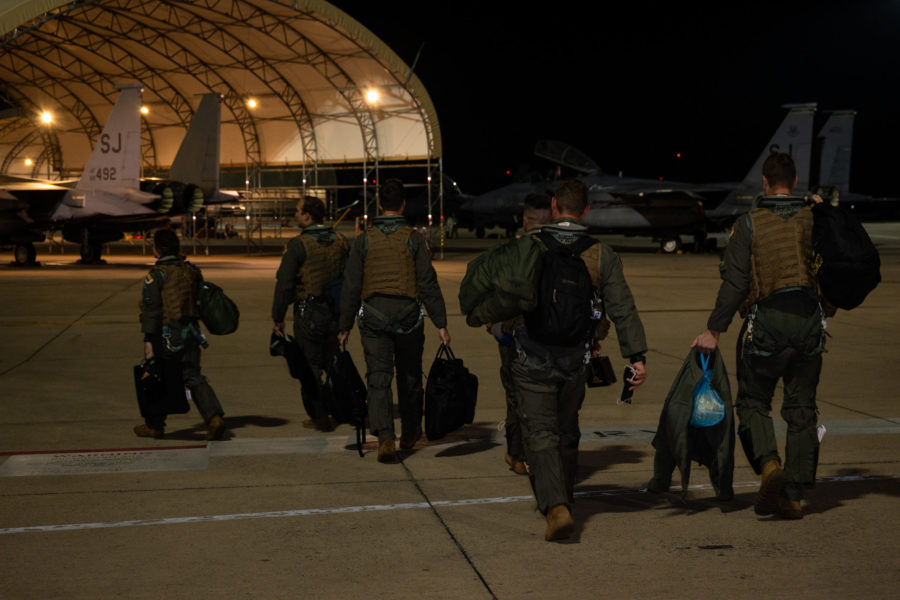 Operation Castle Forge is a command-led joint and multinational training exercise focused on a dynamic partnership and collective defense of the Black Sea region. F-15E Strike Eagles from the 336th Fighter Squadron at Seymour Johnson Air Force Base, N.C., deployed to Europe in support of the exercise.

“We’ve really been working hard to refine how we execute agile combat employment, particularly in coordination with our partners,” USAFE-AFAFRICA commander Gen. Jeffrey L. Harrigian told reporters at AFA’s Air, Space & Cyber Conference in September. “The bottom-level approach really starts with our Airmen, who are embracing it, recognizing that when you empower them, they’re going to come up with innovative solutions.”

The command has not named which of its units are participating in the exercise, nor what will need to be accomplished before it declares initial operational capability of the concept. Agile combat employment, also known as ACE, is focused on quickly dispersing smaller contingents of multi-capable Airmen to remote bases. The idea is to increase USAF’s flexibility and to make targeting U.S. forces in a high-end fight more difficult for adversaries such as China.

A USAFE spokesperson told Air Force Magazine at the conference that several of the command’s fighter wings have already declared initial operational capability, but Harrigian had not yet declared IOC for the command as a whole, though the spokesperson expected that to happen in the near future.

Harrigian said at the conference that the goal is to take the innovative solutions Airmen have developed while exercising ACE then “scale it to meet our Air Force requirements.”

Air Force Chief of Staff Gen. Charles Q. Brown Jr. said roughly 60 percent to 70 percent of those requirements are universal across the Air Force, but the different areas of responsibilities also have their own unique challenges and requirements. Because of that, he said, he does not plan to declare an Air Force-wide IOC for ACE, leaving it up to commanders of the Air Force’s major commands to determine what is best for their region and their Airmen.

After 30 years of operating largely from well established air bases in the Middle East, Brown said today’s Airmen have not had a lot of practice going to austere locations, setting up an air base, and truly operating on their own.

“Our Airmen today lack the ability to be in charge—a captain, for example, operating a [detachment] at Tinnian,” a remote island in the Pacific that is part of the Northern Mariana Islands and one that is likely to play an increasingly important role in the region. However, Brown added, “They are fully capable. We just have to give them the opportunity to do it.”