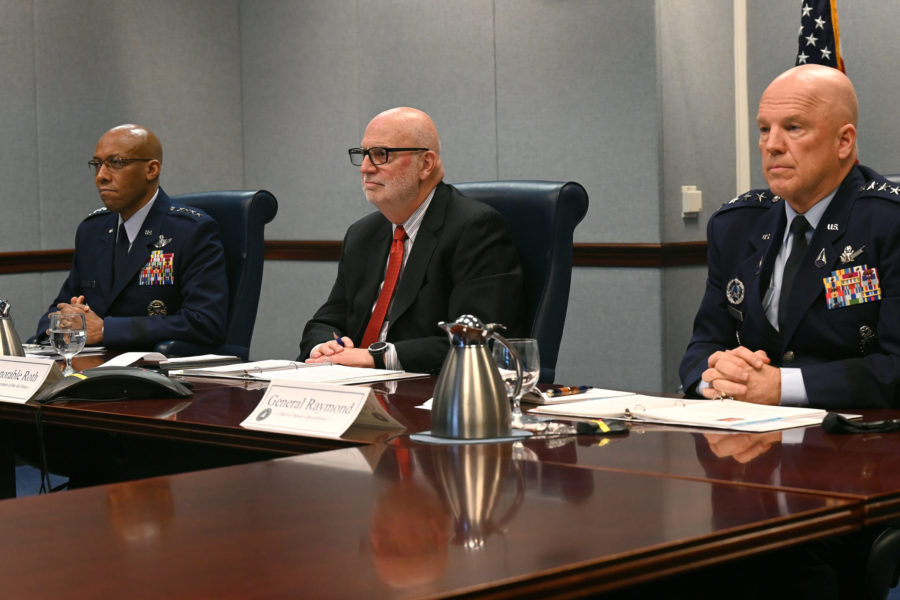 Top Department of the Air Force leaders told lawmakers May 7 they need to divest aging aircraft to make room for more advanced systems, setting up a now familiar budget fight on Capitol Hill.

“America cannot wait to modernize the Air Force any longer, not one year, one month, or one week,” Acting Air Force Secretary John P. Roth and Chief of Staff Gen. Charles Q. Brown Jr. wrote in testimony to the House Appropriations defense subcommittee. “To deter and defeat today’s competitors and tomorrow’s adversaries, we must re-capitalize our Air Force, and we must do it now … The call to accelerate change or lose is not hyperbole—it is a requirement.”

USAF officials face an uphill battle, as Congress in recent years has largely blocked efforts to retire aircraft such as A-10s, legacy refueling tankers, and intelligence, surveillance, and reconnaissance aircraft. Lawmakers also have been critical of new efforts such as the Advanced Battle Management System to replace the E-8C Joint STARS. But with budgets expected to fall in coming years, USAF officials are pressing the urgency.

“We’re going to have to probably make some hard choices and some difficult decisions concerning trying to invest in the future versus continuing to support some of our legacy systems,” Roth told lawmakers during the hearing. “And so we’ve actually been talking about that for two or three years in terms of focusing on the future and taking some additional risks with some of our current systems and some of our legacy capability. My sense is the budget you’ll see is a balanced budget that can support the National Security Strategy with some reasonable risk.”

Because the Biden administration’s 2022 budget request has not been released, USAF officials did not discuss many specifics, so it’s not clear what aircraft would be cut or what future investment plans will be requested.

In prepared testimony, USAF officials once again pressed to allow them to retire old refueling aircraft. Last year, Congress mostly blocked the Air Force from cutting KC-135s, but Air Force officials said getting rid of the aircraft is necessary as the KC-46 comes online.

“The inability to phase the divesture of the legacy tanker fleet shackles funding and manpower resources and hampers the fielding of the more capable KC-46 at the rate required to support combatant commanders,” the testimony states. “This negatively impacts air refueling capacity and tanker advancement. Offsets from legacy tanker divestment in both funding and manpower are critical to the success of the KC-46 and air refueling as a whole.”

USAF leaders also indicated that they have their sights on the RQ-4 Global Hawk fleet for cuts, citing the need for more survivable ISR aircraft. The service wants to cut the RQ-4 Block 30 aircraft, a move that Congress also has blocked before, to repurpose that money for a “penetrating ISR capability.” Future ISR needs to be done by a “family of systems,” including nontraditional assets, sensors, commercial platforms, and a “hybrid force” of fifth- and sixth-generation capabilities, officials said.

“Current ISR platforms have been able to accomplish this task with relative ease because they operated in uncontested and low-threat environments where the United States enjoys superiority across all domains of warfare,” Roth and Brown said in testimony. “Such freedom of action will not be the case in the future. Future threats will challenge the ability of legacy ISR platforms to successfully execute their missions.”

In what is shaping up to be one of the biggest fights of the budget process, Brown and Roth urged lawmakers to continue to support the Ground-Based Strategic Deterrent program to replace the aging Minuteman III intercontinental ballistic missile as some in Congress are looking to cut back on the nuclear triad.

Delayed nuclear modernization means there needs to be a “comprehensive weapon replacement,” the leaders said in testimony. Brown told lawmakers during the hearing that the Minuteman III’s overall infrastructure is aging and that there are not vendors available to rebuild parts needed.

“With the Ground-Based Strategic Deterrent, what you will get, then, is something that’s more safe, more secure, more reliable, and then also paces the threat we’re up against to provide that deterrence value,” he said. “The reason why we actually have the ICBM in the first place is provide that nuclear and strategic deterrence.”

In a sign of the upcoming challenge, multiple lawmakers warned the leaders about the dangers of cutting aging aircraft. Rep. Tom Cole (R-Okla.) highlighted an effort by the Air Force in 2014 to cut E-3 AWACS and a Reserve unit at Tinker Air Force Base in his district.

“I know you sometimes got to make changes to reinvest, but please don’t give up capabilities that you might need in the immediate future,” Cole said. “It’s a very dangerous world, as you know better than me, and sometimes you’re going to need those legacy systems.”

Multiple representatives with Guard C-130 units in their districts also warned the Air Force about cutting Hercules aircraft, as the service looks to modernize the fleet and cut old C-130Hs. Rep. Cheri Bustos (D-Illinois) said she is “deeply concerned” with plans to cut “our mobility flexibility and responsiveness, to decrease the number of our tactical airlift workhorses in the inventory.” She said the upcoming, yet-to-be-released Mobility Capabilities Requirements Study would support an Air Force request to lower the number of C-130s needed to 255, down from the 2018 study’s recommendation of 300.

Brown said it is the Air Force’s intent to work closely with the National Guard “to ensure we are doing a good analysis.” National Guard Bureau chief Gen. Daniel R. Hokanson told the same committee earlier in the week that he also would not want to see the number of C-130s in the Guard drop.

“We do have to make some tough decisions, and what I want to be able to do is commit that we’re going to work very closely with the Guard as we start to make decisions going forward with our C-130s,” Brown said.