Skip to content
An MQ-9 Reaper is parked on a taxiway during sunset at Creech Air Force Base, Nev., on Nov. 17, 2020. USAF photo by Senior Airman Haley Stevens.
Expand Photo 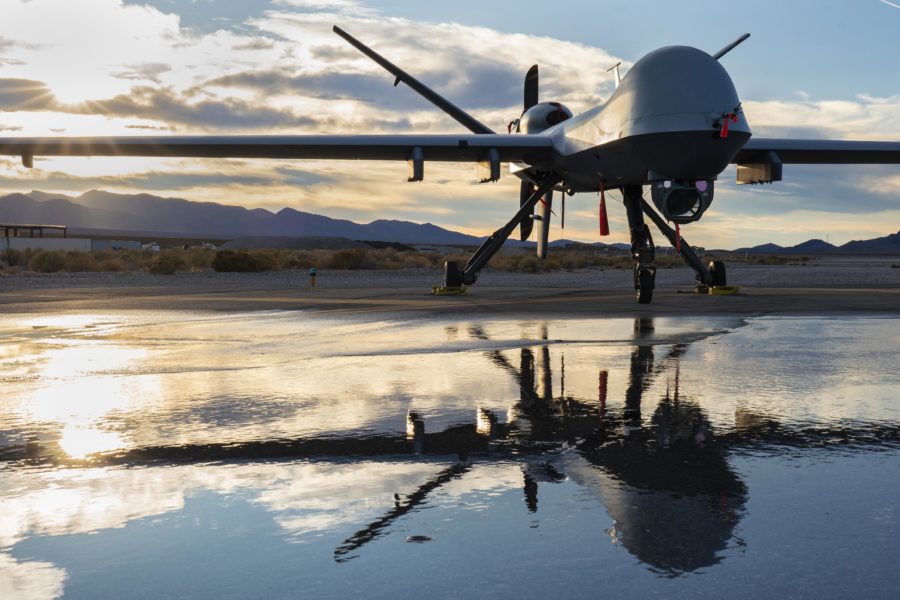 USAF Not Looking at ‘MQ-Next’ as a Direct MQ-9 Replacement, Outlines Reaper Upgrades

The Air Force is starting to field some enhanced capabilities for the MQ-9 Reaper fleet that will better prepare it to operate in more denied environments while also moving away from the idea of an “MQ-Next” direct follow-on for the remotely piloted aircraft.

While the Air Force Life Cycle Management Center has released two requests for information looking at future RPA capabilities, those requests for information were just “market research,” not the beginning of an MQ-9 replacement, said Col. William S. Rogers, the program executive officer for intelligence, surveillance, reconnaissance, and special operations forces, during a virtual AFLCMC media event Aug. 3. One RFI looked at what type of multirole RPA members of private industry could produce, and the other looked at airborne sensing and high-value asset protection.

“We’re really providing information at this point, up to Air Force futures and the Air Staff, [to help] them try to decide how that future medium-altitude UAS capability could fit into the overall force design for the Air Force,” Rogers said. “So, at this point, short answer is there’s no direct replacement termed MQ-Next.”

In the meantime, AFLCMC has laid out its timeline for an overall suite of updates for the MQ-9, called the “MQ-9 multi-domain operations,” or M2DO configuration, which includes improved communications, increased power, autonomous takeoff and landing, and eventually increased use of artificial intelligence to make the Reaper more relevant in a high-end fight.

“The M2DO configuration is really envisioned to mature the MQ-9 and really keep its relevancy through the planned divestiture of the MQ-9 later in the 2030, 2035 timeframe,” said Col. Mike Jiru, the senior materiel leader for the Medium Altitude UAS Division at AFLCMC. “So as we’re experiencing right now, the MQ-9 conducts both a counter [violent extremist organization] mission and then looks at missions in what we’ll call the ‘gray zone.’”

This, for example, includes operations conducted by the recently stood up 25th Attack Group now operating out of Romania. These missions, in more contested environments with Russia nearby, are “obviously very different than the original design criteria of the MQ-9, which was air dominance wherever it flew. So given that, there’s recognition that we have to do something to ensure that the MQ-9 remains relevant. It’s never going to be a penetrating ISR asset that’s going to go into China or anything like that,” Jiru said.

First, M2DO is focused on improving the MQ-9’s ability to communicate. This includes bringing on the Link 16 datalink and improving its command and control “resiliency” through the use of different waveforms and an improved modem both within the aircraft and with the ground systems. Additionally, AFLCMC is looking to bring on open mission systems, including the Stellar Relay computer system, as the first internet protocol “backbone” for the aircraft, with interfaces at each pylon “enabling a really plug-on-and-play sort of aspect,” Jiru said.

The Air Force is also looking to double the amount of power the MQ-9 can distribute so it can bring on “an enhanced suite of mission capabilities” and have the ability for high-power computing. This “opens up the ability of the MQ-9 to be a host for significantly advanced artificial intelligence algorithms and autonomy algorithms,” he said.

AFLCMC is working with the Joint Artificial Intelligence Center to support its development of a “smart sensor,” with demonstration expected in exercises over the next year that will serve as “both a cornerstone for the department’s development of a suite of autonomy algorithms, but then also looking at how does an MQ-9 as a surrogate vehicle help inform the future development of AI and the integration of that AI into the overall fight,” Jiru said.

The Air Force is already bringing on anti-jamming GPS capability, with retrofits underway.

“So that suite of M2DO configurations really is what the Air Force is depending upon to ensure that the MQ-9 remains relevant in its expanding role through the 2030-35 timeframe,” Jiru said.

The Air Force is planning on installing the M2DO configuration on 71 aircraft, but that is a “dial” that will be adjusted depending on budget constraints, he said.

Below is a schedule for upcoming MQ-9 enhancements: