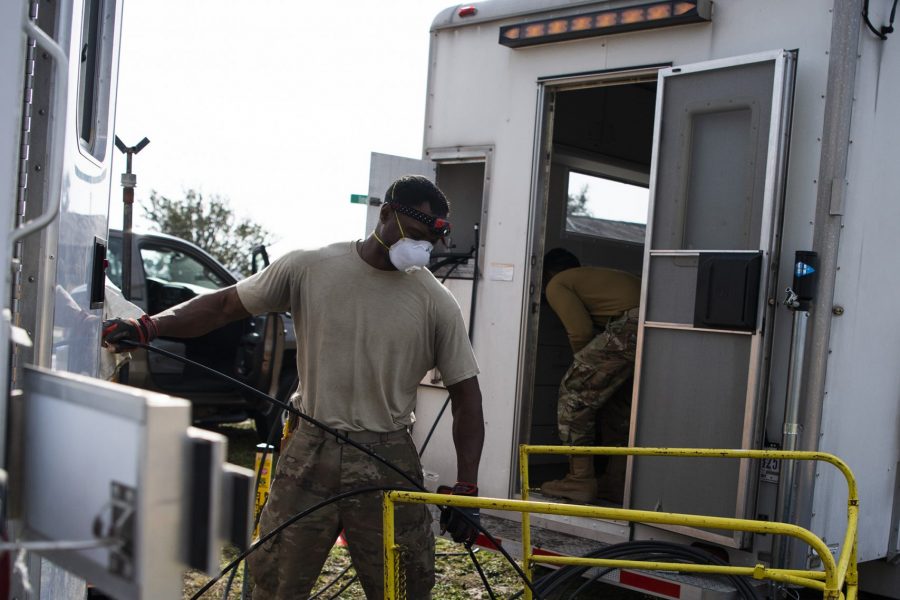 The Air Force says it has all the money it needs to rebuild bases struck by natural disasters in the past two years, after lobbying Congress for billions of dollars to backfill its coffers depleted by recovery efforts.

Congress allocated $5.3 billion for disaster relief through a patchwork of supplemental spending, reprogramming decisions, and the regular budget process in fiscal 2019 and 2020. It’s enough that the Air Force didn’t need to ask for more in fiscal 2021.

“They gave it to us earlier than I would have anticipated,” Maj. Gen. John Pletcher, the Air Force’s deputy assistant budget secretary, told reporters Feb. 10. “So that takes that requirement off of the table for FY ’21 for the Air Force.”

The bulk of the money will go toward reconstructing Tyndall Air Force Base, Fla., which Hurricane Michael devastated in late 2018. Air Force estimates for the rebuild range between $4.3 billion and $4.9 billion.

Tyndall, previously home to F-22s, wants to host 72 F-35s starting in September 2023. It could also house MQ-9s as it evolves into a reorganized, smart “base of the future.” Col. Brian Laidlaw, 325th Fighter Wing commander at Tyndall, projects the installation could grow from its current size of about 4,000 people to 8,000 for full operations.

“Some of the major changes Airmen can expect to see … include an overhaul of the Flightline District to make room for 72 new F-35 fighter jets and other potential new weapons systems (such as the MQ-9 Reaper), and improved facilities on a walkable campus, including a Community Commons equipped with a new chapel, Child Development Center, and bowling alley, among others,” the service said in a recent release. “The Florida Department of Transportation is investing $20 million in a flyover connecting the north and south sides of the base over U.S. Highway 98 to improve traffic flow at the base.”

In September, USAF awarded its first two military construction contracts to begin rebuilding Tyndall, including $11.8 million to construct a fire station and $17.6 million for an air battle manager simulator building, the service said in December. It has already started demolishing and salvaging other facilities and designing the base’s new layout.

Restoring Offutt Air Force Base, Neb., after a historic flood engulfed one-third of the installation in early 2019 was slated to cost about $650 million as well, the service said last year. That effort could take at least four more years.

The service previously thought it would seek $1.2 billion in 2019 plus $3.7 billion across 2020 and 2021. Instead, lawmakers provided $1.9 billion in 2019 and $3.5 billion in 2020. The money goes toward regular operations and maintenance, new military construction, and sustainment and modernization of existing facilities.

“In FY ’19, the Air Force received $1 billion in military construction and $670 million in operations and maintenance via a supplemental request, with an additional $200 million reprogrammed for facility sustainment, restoration, and modernization projects,” service spokeswoman Ann Stefanek said in an email. “In FY ’20, Air Force disaster recovery funding includes $2.6 billion in MILCON, $434 million in FSRM, and $425 million [in] non-facility related costs, totaling $3.5 billion.”

Some of that money, like for MILCON, can be spent over five years for its specific purposes. Other funding is limited to the year in which it was appropriated. Smaller portions will go toward projects like preparing Joint Base Langley-Eustis, Va., to take over F-22 training for Tyndall.

“We are exactly where we predicted we were going to be when we set off on this journey 15 months ago,” Laidlaw said in the release. “This is what progress looks like. Every day we’re doing 90 percent of the missions we were doing prior to the storm with 80 percent of the people, and we’re doing it in only 50 percent of our facilities.”

Still, it’s difficult for the Air Force to plan its response to the next devastating storm. Because budgets are crafted multiple years in advance, the military has to reactively pull dollars from other projects to pay for storm cleanup and restoration until lawmakers decide to replenish or top off that funding.

“I can’t submit a request to Congress for an unknown weather event,” Pletcher said. “What they’re always doing is chasing … the disasters that occur. If I submit to [Congress] a wedge that says, ‘I want to have this money in case something happens,’ it’ll probably be the first place that they have to go to source other requirements.”