Skip to content
The S-400 Triumf is shown in Moscow during a parade rehearsal in 2018. Photo by Dmitriy Fomin via Flickr.
Expand Photo 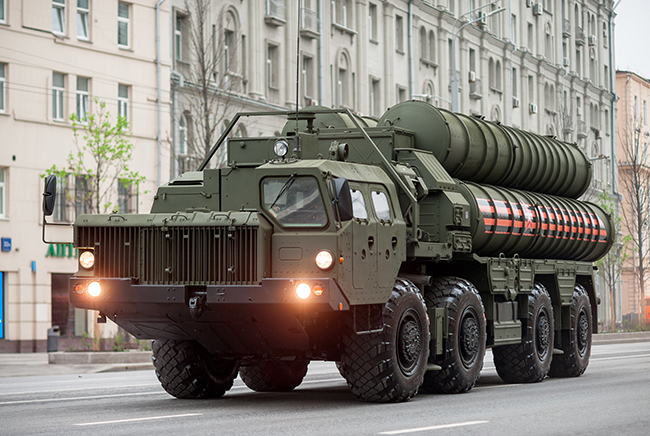 US Sanctions Turkey Over S-400 Buy

The State Department on Dec. 14 announced sanctions against Turkey’s Presidency of Defense Industries (SSB) over the country’s purchase of the Russian S-400 surface-to-air missile system—a move the Trump administration has threatened for more than a year.

Secretary of State Mike Pompeo carried out the sanctions allowed by the 2017 Countering America’s Adversaries Through Sanctions Act (CAATSA), which lets the U.S. government retaliate against those who do significant business with entities connected to Russia’s defense or intelligence sectors.

Pompeo said that SSB’s dealings with Russia defense-export agency Rosoboronexport to obtain the S-400 triggered CAATSA sanctions. Buying the S-400 reportedly cost more than $2 billion, according to the Associated Press. The air defense systems began arriving in Turkey in mid-2019.

The State Department said the sanctions are intended to “impose costs on Russia in response to its wide range of malign activities,” and not to undermine Turkey’s “military capabilities or combat readiness.”

According to the State Department, the sanctions:

“Today’s action sends a clear signal that the United States will fully implement CAATSA Section 231 and will not tolerate significant transactions with Russia’s defense and intelligence sectors,” Pompeo said.

The sanctions come after Turkey’s acquisition of the S-400 also prompted the Pentagon to cut off Ankara from the F-35 Joint Strike Fighter program. The Defense Department argues that the NATO ally cannot own both the key fighter jet and a Russian-built defensive system designed to take it out.

Pompeo urged Turkey to work with the U.S. to “resolve the S-400 problem immediately.”

“Turkey is a valued ally and an important regional security partner for the United States, and we seek to continue our decades-long history of productive defense-sector cooperation by removing the obstacle of Turkey’s S-400 possession as soon as possible,” he wrote.

Turkey’s Ministry of Foreign Affairs pushed back against the sanctions in a Dec. 14 statement, condemning the U.S. decision to pursue that route rather than accept a Turkish proposal to solve the S-400 problem “through dialogue and diplomacy” as “completely senseless.”

“The conditions which compelled Turkey to acquire S-400 systems are well known,” the ministry wrote. “[President Donald J. Trump] himself has admitted on many instances that Turkey’s acquisition was justified.”

The ministry alleged that there was no “technical merit” to U.S. claims that the S-400 could endanger “NATO systems,” and reiterated Turkey’s willingness to address the issue via a working group.

“Turkey will take the necessary steps against this decision, which will negatively affect our relations and will retaliate in a manner and timing it deems appropriate,” it wrote. “Turkey will never refrain from taking the necessary measures to safeguard its national security.”

The ministry encouraged the U.S. to rethink the sanctions and remedy what it deemed a “grave mistake as soon as possible,” and said it was still willing to solve the S-400 problem through diplomatic channels.

American lawmakers have urged the executive branch to levy CAATSA sanctions, and added a provision in the fiscal 2021 defense policy bill to make them mandatory.

In October, a bipartisan pair of senators sent a letter to Pompeo pushing for sanctions amid worries that Turkey may have used the S-400 system to track American-made F-16s. The jets were returning from an August exercise that Cyprus, France, Greece, and Italy held in response to Turkish aggression in the Mediterranean Sea, Air Force Magazine previously reported.