Skip to content
Patriot missile batteries dot the airfield at Rzsesow-Jasionka Airport in southeast Poland near the Ukraine border, poised to protect high value deliveries from the U.S. and partners of across Europe. Staff photo by Abraham Mahshie.
Expand Photo 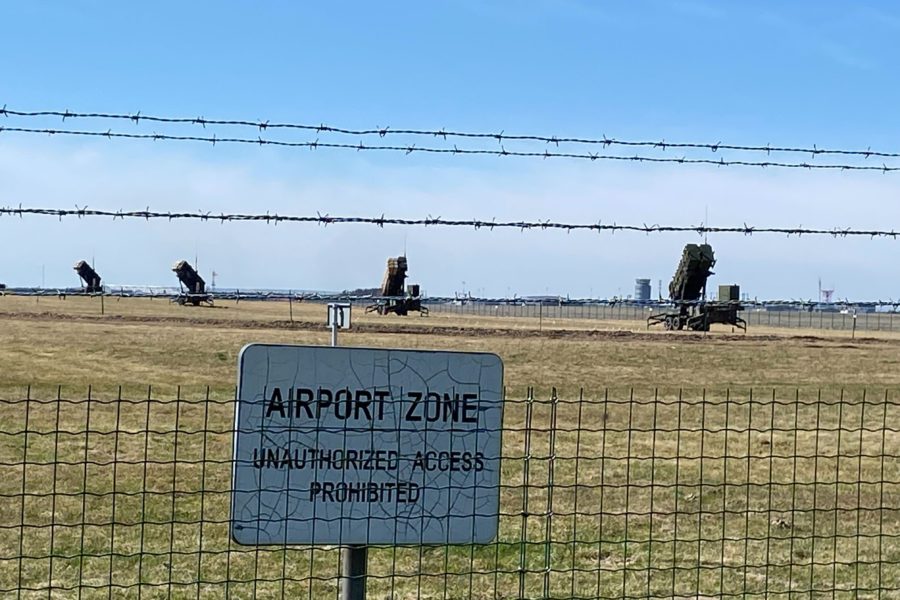 RZESZOW, Poland—Just 62 miles from the Ukrainian border in Southeast Poland, a small regional airport has been converted to an international logistics hub where aircraft deliver defense and humanitarian assistance to Ukraine. It is protected by American air defense systems.

Military and cargo aircraft from the United States and across Europe land, unload, and take off in quick succession here. Ukrainian registered cargo and military trucks line the gate waiting for their load, passing American Soldiers stationed next to Humvees. Then, they promptly stream down a nearby highway, over a hill, and out of sight in the direction of the Krakovets, Ukraine border crossing.

After Moscow promised to target defense assistance to Ukraine, the United States established an array of anti-aircraft, anti-missile systems, including Patriots, in Poland to protect this vital airfield and cargo transfer center. Camouflage netting covers command-and-control points scattered throughout. Even miles away, military equipment is strategically positioned on hilltops.

“We are constantly at the edge of NATO, so we have this awareness that we face a full-scale threat from the Northeast,” he said, referring to Russia’s military positions in Kaliningrad and Belarus. “We cannot afford the situation [of] Ukraine losing the war.”

Russia’s heavily fortified ex-clave of Kaliningrad is situated between Poland and Lithuania on the Baltic Sea.

There, Russia possesses a heavily fortified sliver of land, complete with advanced anti-access/aerial-denial S-400 systems that force Poland to fly daily within an A2/AD bubble.

“If you imagine a situation [where] Ukraine were to lose this war, that would be very dangerous for us and for all of NATO because in that case, Russia would be closer,” Nowak said.

That’s why Poland is hosting an important defense logistics hub for Ukraine.

“The airfield in Rzeszow, located in Southeast Poland, is currently the hub for defense or humanitarian aid to Ukraine,” said Nowak.

On a recent sunny day, a C-130 cargo plane from the Turkish Air Force could be seen on the runway at Rzeszów–Jasionka Airport. As it unloaded, an Antonov An-12 run by the Ukrainian charter cargo company Cavok Air landed and pulled up next to it, departing within the hour.

The same afternoon, a C-130 bearing the red-white colors of Poland on its tail also landed and departed within an hour. So, too, did a British C-130, landing and departing within 30 minutes. A Ukraine International commercial jet also landed and parked alongside the military aircraft.

While no U.S. aircraft were spotted in a four-hour afternoon period at the airfield on April 12, Pentagon spokesman John F. Kirby said “roughly eight to 10” flights full of supplies and equipment for Ukraine, including advanced air defense and anti-tank weapons, arrive to Eastern Europe each day.

Although Nowak considers the possibility of a Russian strike on NATO soil targeting the defense logistics hub to be “low,” protecting against the possibility is necessary, he said.

Still, commercial flights come and go, and life in the city of Rzeszow carries on. The only signs of nearby war are the full hotels and shows of solidarity: Ukrainian and Polish flags flying side by side, yellow and blue ribbons fastened on the jackets of businessmen.

“In the most pessimistic scenarios, yes, they can strike us. That’s why we build this whole defense system over, I would say, vital points here in Poland,” Nowak said.

Poland received foreign military sales approval to purchase its own Patriots in 2017 but deliveries are not expected until later this year.

“The U.S. Air Force and the U.S. Army actually jumped in, and they brought Patriots to Poland,” said Nowak. “This place is actually very well protected.”

On March 25, President Joe Biden touched down at Rzeszów–Jasionka Airport, meeting with 82nd Airborne Division troops at the nearby G2A Arena. He praised humanitarian efforts and Poland’s acceptance of more than 2 million refugees from Ukraine.

Nowak said each time Russia has threatened, the U.S. Air Force has been the first to support Poland.

“Even then, in 2014, eight years ago, we had this strong impression that the U.S. Air Force is a very reliable ally for us, the Polish Air Force,” he said.