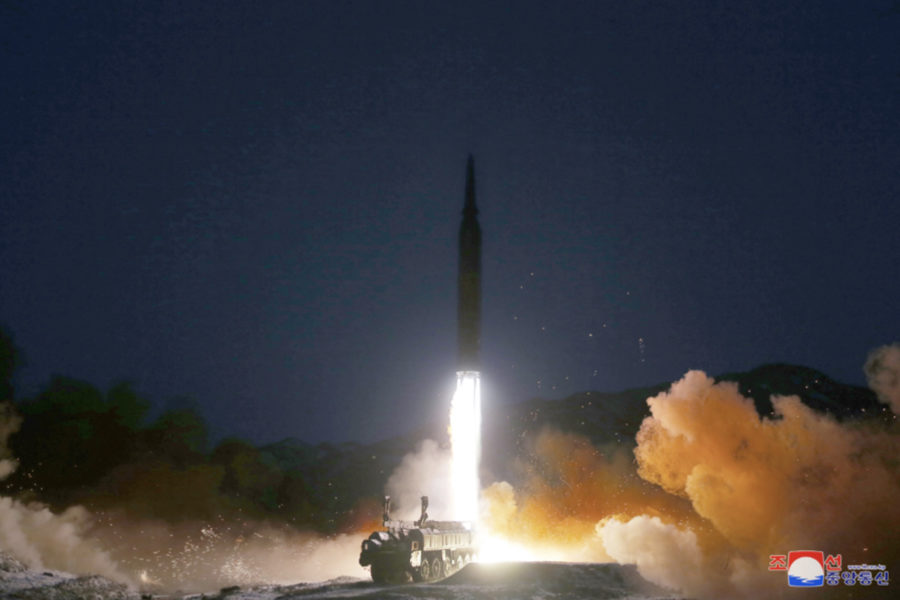 US Imposes Sanctions in Response to North Korean Missile Tests

The Biden Administration has economically sanctioned five individual North Koreans, a Russian national, and a Russian company in response to six missile tests conducted by Pyongyang since September, which the Administration says violate U.N. Security Council resolutions. The sanctioned individuals are based in China and Russia.

The test of a hypersonic missile on Jan. 11 is “further evidence” that North Korea “continues to advance prohibited programs despite the international community’s calls for diplomacy and denuclearization,” said Brian Nelson, undersecretary of the treasury for terrorism and financial intelligence, in a statement for the press.

The sanctions target North Korea’s “continued use of overseas representatives to illegally procure goods for weapons,” and are aimed at countering Pyongyang’s “weapons of mass destruction and ballistic missile programs,” Nelson said.

The latest provocative launch occurred Jan. 10, when North Korea conducted a test of a hypersonic missile, which maneuvered before coming down in the Sea of Japan, some 435 miles from its launch point near the Chinese border. North Korea state media said it was the third test of a hypersonic missile, during which the vehicle made a “glide jump flight” followed by “corkscrew maneuvering.” The missile was first tested last September, it said. It was the second test in a week—another was made Jan. 5. Pyongyang said both tests were successful, although some missile experts doubted the same missile was used in both instances.

North Korean dictator Kim Jong Un, who was present for the launch, said the hypersonic missile development is one element of the nation’s “war deterrent.”

Photos released by Pyongyang showed a launching ballistic missile with a nosecone shaped like a hypersonic vehicle. South Korea’s joint chiefs of staff issued a statement that the vehicle reached a speed of Mach 10 and an altitude of 37 miles; roughly half the distance to where space begins. The South Korean military leaders also assessed that the missile fired “is more advanced than the missile North Korea fired on Jan. 5,” but said they are working with the U.S. to characterize and analyze the test.

The South Korean government said its military has the ability to “detect and intercept this projectile, and we are continuously strengthening our response system.”

Nelson said the five sanctioned individuals provided goods, services, or cash to North Korea’s Second Academy of Natural Sciences, believed to be the overseer of the missile program. Their “activities or transactions … have materially contributed to the proliferation of weapons of mass destruction or their means of delivery,” he said. Any assets they have in the U.S. will be frozen and no American company can do business with them. Any U.S. or foreign company doing business with the sanctioned individuals or company will also be penalized.

The sanctioned persons were involved in obtaining metal alloys, software, and chemicals, as well as telecommunications equipment from Russia.

The Jan. 11 hypersonic test came just hours after five nations—Albania, France, Ireland, Japan, and the U.K., along with the U.S.—condemned the Jan. 5 test and called on U.N. member states to enforce sanctions they agreed to impose on North Korea. The U.N. Security Council has banned Pyongyang from conducting any tests of ballistic missiles or weapons of mass destruction.

U.S. Indo-Pacific Command issued a statement Jan. 10 saying they were aware of the launch and are “consulting closely with our allies and partners.” The command said the launch “does not pose an immediate threat to U.S. personnel or territory, or to our allies,” but it “highlights the destabilizing impact” of North Korea’s “illicit weapons program.” It added that the U.S. commitment to the defense of Japan and South Korea “remains ironclad.” Indo-PACOM did not describe the missile as hypersonic, though, calling it “ballistic.” U.S. Forces Korea said that no U.S. or South Korean territory or personnel were at risk due to the launch.

A Pentagon spokesman added that the U.S. “takes any new capability seriously” and repeated the condemnation of Pyongyang’s testing of ballistic missiles, “which are destabilizing to the region and to the international community.”

At about the same time as the North Korean missile launch, the Federal Aviation Administration issued a “ground stop” of air traffic in the West Coast region, saying it was a “matter of precaution,” but full operations were resumed within 15 minutes. However, air traffic controllers were confused by the alert and told some airborne aircraft that a “national” ground stop was in effect.

The North American Aerospace Defense Command and U.S. Northern Command said they did not issue any warning relative to the North Korean missile launch.