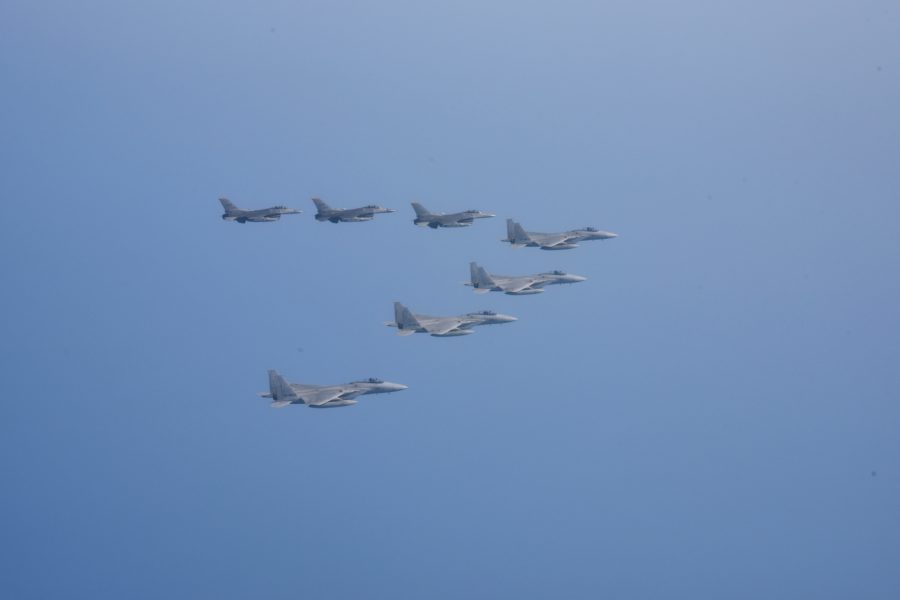 US Exercises with Japan, South Korea in Response to North Korean Missile Test

In a show force over the Pacific, the U.S. conducted separate bilateral exercises with South Korea and Japan in response to North Korea’s May 24 ballistic missile test. The North’s test reportedly included an intercontinental ballistic missile, launched while President Joe Biden flew home from the region.

“This exercise was conducted to demonstrate our nation’s rapid reaction capabilities, high levels of force readiness, close coordination, bilateral interoperability, and credible deterrent capacity,” read a statement from U.S. Indo-Pacific command, referring to the exercise with Japan conducted on May 25.

The INDOPACOM statement also said that the U.S. and Japan’s Air Self-Defense force conducted a combined capabilities exercise over the Sea of Japan to “deter and counter regional threats.”

The exercise between the United States and South Korea included the firing of a Republic of Korea (ROK) Hyunmu-2 missile May 25 using the U.S. Army’s Tactical Missile System.

“To demonstrate the ability of the combined ROK-U.S. force to respond quickly to crisis events, the U.S. Eighth Army and Republic of Korea military personnel conducted a combined live-fire exercise,” read a statement from U.S. Forces Korea.

“Missiles were fired from the northeast of South Korea into the East Sea following appropriate notifications for air and maritime safety,” the statement said.

Pentagon spokesman John F. Kirby said May 26 that the U.S. is not afraid to respond with shows of force to North Korea’s violations of UN Security Council resolutions.

“We clearly are willing to do things bilaterally with either ally as well as trilaterally and we’ve already proven that,” he said.

Kirby said Defense Secretary Lloyd J. Austin III is keen on improving trilateral cooperation between the United States, Japan, and South Korea, and there may be more exercises to come.

U.S. Indo-Pacific Command did not immediately respond to questions by Air Force Magazine about the exercises.

In recent days, Austin has called both his Japanese and Korean counterparts to discuss Defense Department analysis regarding the reputed three missiles launched by North Korea. While both South Korea and Japan have released statements describing North Korea’s 17th series of missile tests, including distances traveled, success, and the ICBM threat, the Pentagon has thus far refused to go beyond describing the bout as “multiple ballistic missile launches.”

“We’re still analyzing the data in the intelligence,” Kirby said. “We haven’t come to any final conclusions.”

North Korea’s ballistic missile launch was not the only adversarial activity of the week in the Pacific. On May 24, China and Russia conducted a joint exercise with bombers.

“They flew over the Sea of Japan and continued through the East China Sea and the Philippine Sea,” Kirby said, noting that the complex bomber exercise was likely planned far in advance. “It’s clear that China has and continues to look for ways to prioritize their relationship with Russia versus prioritizing the relationships with other countries in the Indo-Pacific.

Kirby went so far as to say that China was “alienating and isolating themselves” from other Pacific nations due to their tactics of “coercion and intimidation,” which in the past have included both economic and aggressive military action.

China’s foreign minister, however, is currently visiting up to 10 small Pacific island nations to secure a pact that would cover areas ranging from security to fisheries. U.S. State Department spokesman Ned Price told reporters on May 25 that China “has a pattern of offering shadowy, vague deals with little transparency or regional consultation in areas related to fishing, related to resource management, development, development assistance and more recently even security practices.”

Austin, for his part, hopes to engender goodwill with Asia-Pacific allies with his fourth trip to the region in June. His first stop will be in Singapore to attend the Shangri La Dialogue hosted by the International Institute for Strategic Studies. Austin is scheduled to visit Thailand as well in what is shaping up to be a race with China to court countries in the region.

“He will also have the chance to meet with key Indo-Pacific leaders to again advance some of our defense relationships in the region,” said Kirby. “The Secretary will travel to Bangkok as the United States and Thailand take important steps towards modernizing the U.S.-Thai alliance and expanding the depth and breadth of our military cooperation.”