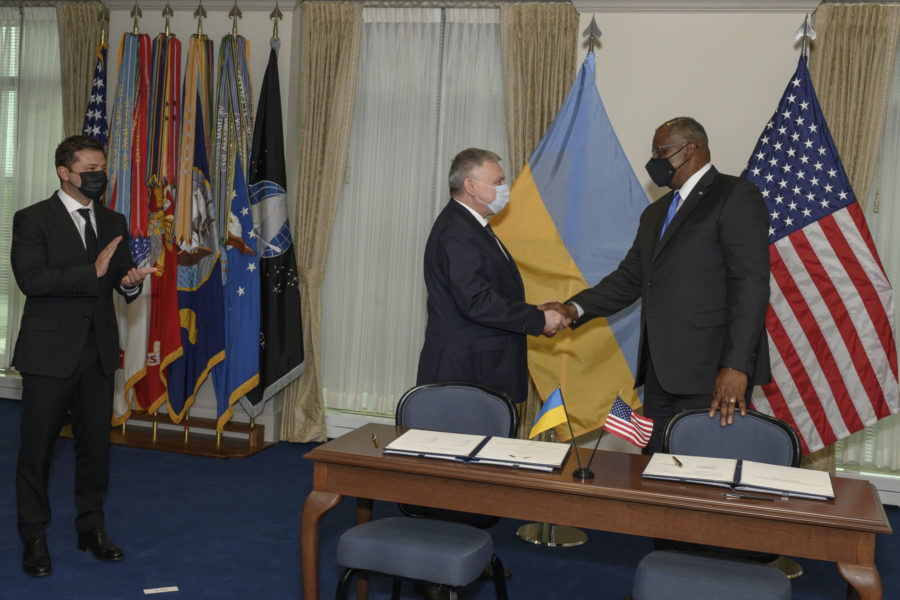 Ukrainian President Volodymyr Zelensky knows what it means to fight the Russians, and he came to Washington asking for more military assistance to help keep Russian President Vladimir Putin from encroaching further on Europe.

In Oval Office remarks with Zelensky on Sept. 1, President Joe Biden made note of a $60 million security assistance package that included Javelin anti-tank missiles, and he underscored why Ukraine matters to U.S. interests.

“Ukraine and the United States have a similar value system and the strong commitment to the fulfillment of a promise … and that is a Europe whole, free, and at peace,” Biden said.

Zelensky, in turn, stated a number of the security challenges he intended to discuss with Biden, from help repelling Russia’s proxy war in eastern Ukraine and the occupation of Crimea, to threatened energy security once the Nord Stream 2 pipeline is activated. He also asked for Biden’s “vision of Ukraine’s chances to join NATO.”

The meeting comes one day after Defense Secretary Lloyd J. Austin III and his Ukranian counterpart signed a new defense cooperation deal at the Pentagon aimed at improving Ukraine’s military institutions and capabilities. Ukraine, the largest democracy in Eastern Europe, has been occupied and engaged in conflict with Russian-backed separatists for eight years following the Russian invasion of Crimea in 2014. Since then, the United States has provided $2.5 billion in security assistance.

“We again call on Russia to end its occupation of Crimea and to stop perpetuating the conflict in eastern Ukraine, and we will continue to stand with you in the face of this Russian aggression,” Austin said in his welcoming remarks, during Zelensky’s and Ukrainian Defense Minister Andrii Taran’s visit to the Pentagon.

The agreement outlined strategic priorities to help Ukraine counter Russian aggression, including through training and exercises and defense sector reforms that would improve NATO interoperability. It also will include increased cooperation in regards to cybersecurity, national security systems, and defense intelligence.

Prior to his first meeting with Biden, Zelensky described to Air Force Magazine the challenges he faces as his country is occupied by Russian proxies, barraged by hybrid warfare attacks, and threatened by 80,000 Russian troops on the border.

“We agreed to an increase of military assistance and cooperation in many areas of security and defense,” Zelensky said at an event in Mount Vernon, Va., after meeting Austin.

“This is just the direction, the framework,” he added. “I need more substance.”

Zelensky explained that the framework agreement would be broken into specifics by an American and Ukrainian team, and he said Austin committed to visit Ukraine. The Ukrainian president said the “political will” existed, and he believed closer defense cooperation would be forthcoming.

“There is no political procrastination—another year, another year—this is about tactics and strategy,” he said.

Defense cooperation with Ukraine has been close since Putin annexed the Crimean peninsula, seizing a vital port and 60 percent of the Ukrainian Navy. Putin has continued to back separatists in the Donbas region of eastern Ukraine, cutting off a sliver of Ukrainian territory and flooding it with anti-Ukrainian propaganda.

All the while, Zelensky has called for a pathway to NATO entry and lethal security assistance from the United States.

Those calls grew louder in April, when Russia massed 100,000 troops, tanks, and attack helicopters on the Ukrainian border, waiting weeks before describing the event as a military exercise and pulling some troops back. Zelensky said Aug. 31 that most of those troops remain.

U.S. assistance has evolved to meet the needs of the Ukrainian military, Pentagon officials told Air Force Magazine, providing anti-sniper equipment, night vision and thermal goggles to protect against elite Russian sniper units, and medical equipment to save the lives of soldiers wounded on the front line.

The low-intensity conflict has seen numerous violations since a cease-fire agreement was signed in Minsk in 2015.

“We are not asking for any gifts. We need opportunities,” he said at Mount Vernon. “For our specialists, for the Ukrainian Army, the Ministry of National Security, our security institutions.”

He also called for assistance in cybersecurity and information security.

Ukrainian Foreign Minister Dmytro Kuleba told Air Force Magazine during a pull-aside interview that Zelensky and Austin discussed how to meet Ukraine’s needs and keep a buffer of democracy in Eastern Europe.

“In the meeting between the President and the Secretary of Defense, we discussed some specific areas of how this framework agreement will be unfolded,” Kuleba said.

“It will make our army stronger. It will make us more capable of deterring Russia militarily if Russia decides to advance,” he explained. “The stronger our army is, the higher the price of aggression for Russia will become.”

“It’s a very specific gesture made for the president,” he said. “It’s both political, but also very practical, and it’s a perfect match.”

Former American ambassador to Ukraine William B. Taylor told Air Force Magazine the disparate Ukrainian security services will need to consolidate for coordination with the states to improve.

Taylor, who was ambassador to Ukraine from 2006 to 2009 and then again from 2019 to 2020, said America’s tailored military assistance to Ukraine is helping to deter Russia.

“The javelins are a very powerful, effective deterrent to the Russians, and the Russians, apparently, respect them. They are backing away from the range,” he said of Russian tanks positioned just outside the Donbas front line.