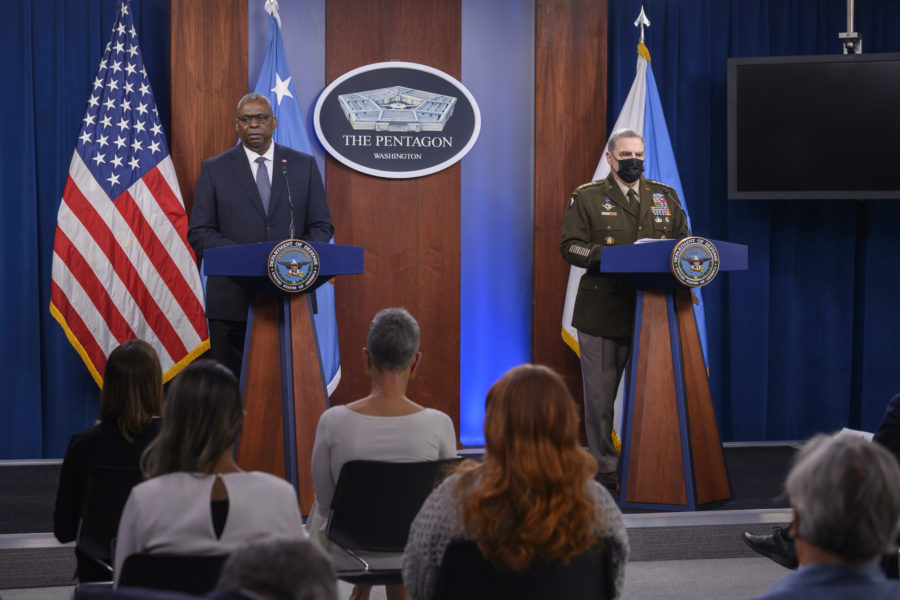 Ukraine Invasion Would Be ‘Horrific,’ But US Forces Meant to Reassure NATO

American forces deployed to or on standby for Europe are meant to reassure NATO allies in the face of a huge Russian military buildup around Ukraine, Defense Secretary Lloyd J. Austin III said in a Jan. 28 press conference. And though he insisted that U.S. forces will not enter Ukraine, except those delivering war goods or to train Ukrainian soldiers, Austin emphasized that Russia will still face grave consequences if it doesn’t de-escalate what looks like a planned invasion of Ukraine.

Russian President Vladimir Putin has arrayed more than 100,000 troops around Ukraine, and has “increased Russian naval activity in the Northern Atlantic and Mediterranean Sea,” so he “clearly now has” the capability to invade Ukraine, or to seize “cities and significant territories,” Austin said. Russian military moves, accompanied by its “media spouting off now about alleged [anti-Russian] activities in Eastern Ukraine” and disinformation meant to create a “potential pretext” for strikes on Donbass or further incursions into Ukraine are “straight out of the Russian playbook,” he added.

“They’re not fooling us,” Austin said.

If Russia invades Ukraine, it will “violate the bedrock principles of national sovereignty, territorial integrity, and self determination.” The U.S. and NATO “take this very seriously,” he said, repeating several times that the U.S. commitment to honoring its Article 5 mutual defense agreement with NATO allies is “ironclad.”

Austin and Joint Chiefs of Staff Chairman Gen. Mark A. Milley told reporters, though, that this buildup “feels different” from previous Russian exercises or saber-rattling.

“This is larger in scale and scope … than anything we’ve seen in recent memory,” Milley said.

Austin warned Putin that a military move on Ukraine will “accomplish the very thing Russia says it does not want: A NATO alliance strengthened and resolved on its Western flank.”

The 8,500 alerted troops in the U.S. are “ready to go” if NATO activates them, Austin said. The U.S. forces in the region now “provide great value just by virtue of their presence” and “reassure our partners that we’re interested in helping them,” Austin said. However, he emphasized that “these are temporary deployments.”

Ukraine shares a border with four NATO allies—Poland, Slovakia, Hungary, and Romania—and the U.S. will defend its allies if necessary, Milley said.

But, “conflict is not inevitable,” Austin said. Putin can easily “de-escalate” and withdraw his forces. “There is still time and space for diplomacy.” Austin said the U.S. and NATO have “offered Russia a path away from crisis and toward greater security,” but whatever Putin decides, the U.S. “will stand with our allies and partners.”

In the meantime, Austin touted the provision of $2.7 billion worth of security aid to Ukraine since 2017, with $650 million of that within the last year, and said President Joe Biden has authorized $200 million more in the form of “additional Javelins and other anti-armor weapons, grenade launchers, large quantities of artillery and small arms, ammunition, and other equipment. Those deliveries are ongoing.”

Milley said it’s the policy of the U.S. to “continue to support an independent Ukraine,” and the U.S. will continue to “enhance” Ukraine’s ability to protect itself. He touted Ukraine’s 150,000 active duty troops are a “highly regarded territorial force” and militia, and have credible air defense bases, depots, and artillery.

“Their combat capabilities have improved since 2014, when Russia illegally annexed Crimea,” Milley asserted. But “they need additional help to defend themselves, especially from an invasion force the size of the one that Russia is currently massing, if Russia chooses to invade Ukraine.”

He warned Putin that an invasion “will not be cost-free in terms of casualties, or other significant effects.”

Milley said the U.S. has “zero” offensive capabilities or permanent forces in Ukraine, but has a small group of forces there to train Ukrainian troops in “tactics, techniques, and procedures.” NATO has “130-plus brigade maneuver forces, not including U.S. forces; 93 squadrons of high-end fighters, four carriers, [and] many more surface combatants” available. It’s a “very, very significant” force, he added.

If Russia “unleashed” its forces on Ukraine—“the ground maneuver force, the artillery, the ballistic missiles, the air forces, all of it packaged together, … it would result in a significant amount of casualties,” Milley said. In “dense urban environments, along roads and so forth … It would be horrific. It would be terrible.”

“The right answer here is a diplomatic solution,” he added.