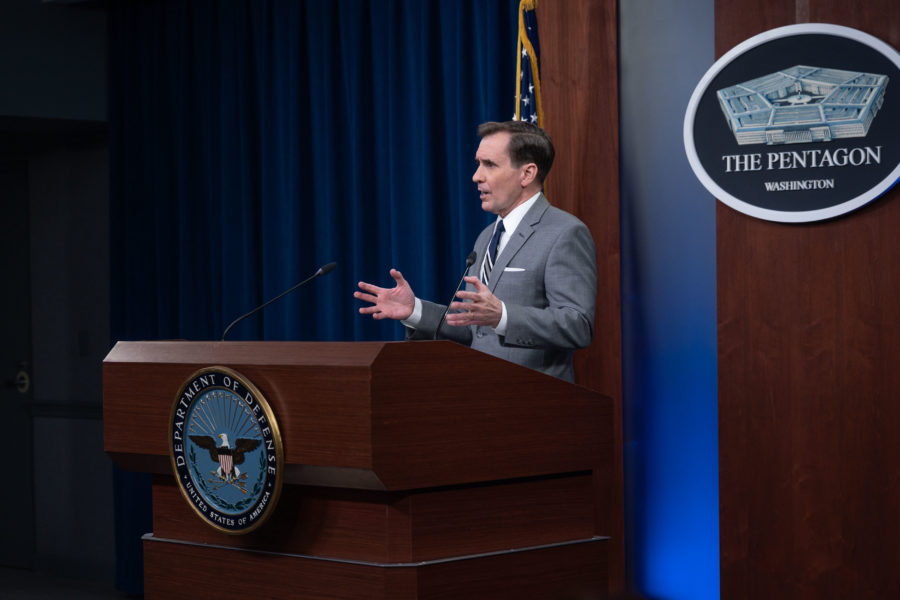 These troops would be the U.S. contribution to a 40,000-member NATO Response Force being organized in response to Russian aggression in Eastern Europe, Kirby said. There has been no decision to actually deploy that force—and the troops now on alert may not go to Europe at all, Kirby said. The bulk of the units being alerted are Active-duty ground troops, he added.

Kirby declined to specify which units are affected, saying they will be notified through normal channels.

“This is about placing units on heightened alert,” Kirby said. “It does not mean that they’re going to be jumping on gray tails tomorrow and leaving.”

U.S. Transportation Command “is tracking these prepare-to-deploy orders and will obviously be postured as appropriate, to support as needed.” Kirby did not say whether European Command’s supply of Air Force tankers is being supplemented to be ready for an increase in air transport needs. More details of the units affected will be supplied in the coming days, he said.

President Joe Biden could elect to deploy forces separately or add to the 8,500 if necessary, in consultation with NATO allies, Kirby said. The forces on alert have not yet been “assigned a mission,” he said. So it’s premature to establish what their “success” would look like.

The NRF comprises ground, air, maritime, and special operations forces, Kirby said. Within it is the NATO Very high readiness Joint Task Force, or VJTF, consisting of 20,000 operators across all domains.

The NRF could be activated by a collective NATO decision, but also by “a deteriorating security environment,” Kirby said. “Additional Brigade Combat Teams, logistics, medical, aviation, intelligence, surveillance, reconnaissance, transportation, and additional capabilities” could also be added, either from the U.S. or from Europe, he said.

The NRF alert is not necessarily intended to reinforce Ukraine or respond there if Russia invades, Kirby said. Rather, it is a response in support of NATO members on the alliance’s Eastern flank, who “have said they feel threatened” by Russia’s massing of forces on three sides of Ukraine and in Belarus. Kirby said the alert is intended to “reassure” those allies. The U.S. will honor its “ironclad” NATO Article 5 collective defense obligations if Russia moves against a NATO member, Kirby said. Ukraine, however, is not a NATO member.

Kirby did not answer directly when asked if U.S. military posture in the Indo-Pacific is also being increased, but noted that two carrier battle groups are exercising in the region jointly with Japan.

“It’s not unusual for us to take advantage of the opportunity when you have two aircraft carriers in the same body of water to exercise together,” he said.

The U.S. action is a “prudent response” to Russia’s military buildup near Ukraine, Kirby said, adding that Russia could de-escalate the situation “at any time” by pulling its troops back. NATO “is a defensive alliance,” he said. All U.S. and NATO actions undertaken so far are meant “to deter Russia.”

He also said NATO intelligence has a “pretty good sight picture” of Russian forces in the region and would know quickly if Russia is making an overt military move against Ukraine or a NATO state.

President Joe Biden met with defense leaders over the weekend at Camp David, and was presented with options for deploying 1,000-5,000 troops to Eastern European countries, with the possibility of increasing those figures tenfold if the situation worsens, according to a report from the New York Times, which the White House did not refute. The Times said Biden will make a decision about additional troops this week.

Over the weekend, the White House touted the delivery of hundreds of thousands of pounds of lethal military assistance to Ukraine, including the provision of Stinger anti-aircraft missiles. Secretary of State Anthony Blinken also signed an authorization for NATO partners to transfer American-origin military equipment to Ukraine.

The Ukraine government asked the U.S. and NATO, generally, to immediately apply further economic sanctions on Russia, but Blinken told CNN that they are better used as a bargaining chip at this point. Once applied, “they are no longer a deterrent,” he said.

Byron Callan, a noted defense stocks analyst with Capital Alpha Partners, told investors in a newsletter Jan. 24 that the group has “raised our probability of a Russian war with Ukraine at scale to 70 percent from 50 percent,” citing U.S. and Russian decisions to recall diplomats from embassies in Kiev, Ukraine, and “continuing Russian force deployments” as driving the increased risk of war.