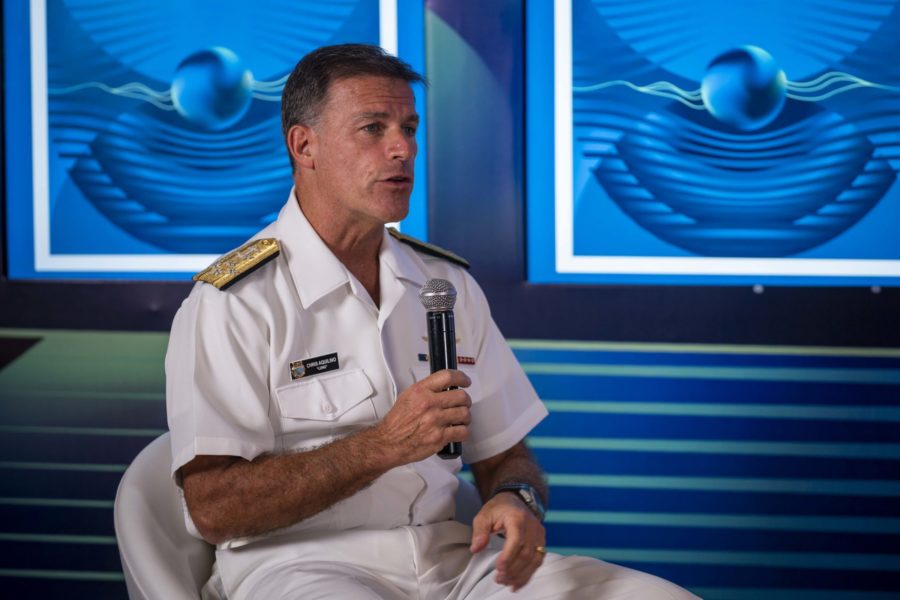 In the future, though, the head of U.S. Indo-Pacific Command would like to see the Air Force permanently station fifth-generation aircraft west of the international date line—closer to China.

INDOPACOM’s commander Adm. John C. Aquilino also stressed the strategic importance of the island of Guam during an event hosted by the Foundation for Defense of Democracies on June 24.

The Marine Corps has stationed F-35Bs at Marine Corps Air Station Iwakuni, Japan, and the Navy has moved aircraft carriers with F-35Cs into the Indo-Pacific. Japan, South Korea, and Australia all operate F-35s as well. But the Air Force thus far has kept its fifth-gen fighters east of the international date line, thousands of miles away. Eielson Air Force Base, Alaska, has Pacific Air Forces’ only F-35s, and both Joint Base Elmendorf–Richardson, Alaska, and Joint Base Pearl Harbor-Hickam, Hawaii, have F-22s.

When asked if he thought it would be reasonable for the Air Force to station fifth-generation aircraft west of the date line, closer to China, Aquilino indicated that he would be in favor of such a move.

“I would envision that capability is … well, it’s certainly desirable,” Aquilino said. “But we would like to get to that ability to, like I said, operate in contested space. Fifth-generation capabilities, whether they be F-22, F-35, are critically important to the ability to deliver deterrence.”

The Air Force currently maintains three air bases in Japan—Misawa Air Base, Kadena Air Base, and Yokota Air Base—and two in South Korea—Osan Air Base and Kunsan Air Base—as well as Andersen Air Force Base on Guam. A mix of F-16s, F-15s, and A-10s are currently stationed at some of those locations, but Aquilino noted that in drafting INDOPACOM’s investment priorities, he’s asked the Air Force for more advanced capabilities.

“Forward stationed, persistent, deep-penetrating capability is what I’ve asked for,” Aquilino said. “Additionally, the ability to be expeditionary and move around the theater in places that matter when needed, that’s what I’ve asked, and [PACAF commander Gen. Kenneth S. Wilsbach] has been tremendous.”

Aquilino did not specify whether he preferred the F-35 or F-22 or where the aircraft should go. But elsewhere in the conversation, he did highlight Guam as “absolutely a strategic location.”

“We will need to operate from Guam. We will need to both fight for and from Guam, and it will provide a variety of capabilities and support functions should we end up in some crisis situation,” Aquilino said. “So that’s extremely important, and … 125,000 United States citizens, it’s the homeland, who would expect to be defended and we treat it, obviously, as important as it is.”

Guam is also farther removed from China than the locations in Japan and Korea, but Aquilino was quick to note that the island is still very much within China’s range.

“The PLA rocket forces are clearly developing continuous advanced capabilities—longer range,” Aquilino said. “Guam has a 360-degree threat, so our ability to defend it and to be able to operate from there is absolutely critical. … I can see a continuous improvement and a continuous threat [from China], and what that leads me to do is to move with a sense of urgency in order to provide the capabilities that both defend and we can project power from Guam.”

Even in a region where the “tyranny of distance” is a frequent concern, “we expect to be attacked in that domain,” Aquilio added. And as part of that mindset, he would like to see Guam’s missile defenses built up. It’s an issue that has become increasingly emphasized in recent years, and the Pentagon has proposed an array of new defensive systems for the island as part of its 2023 budget.