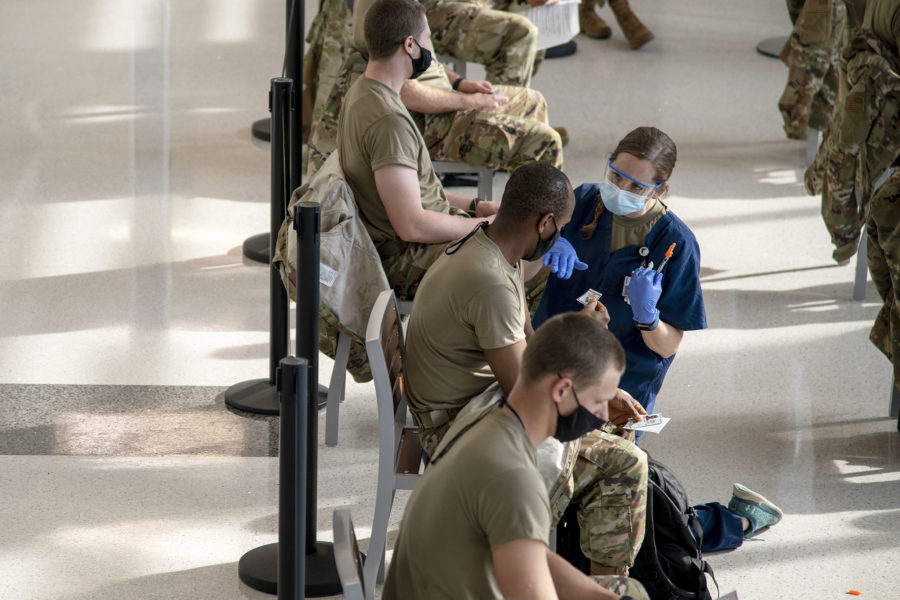 A full-court press by Air Force leaders to encourage vaccines won’t be enough to prevent thousands of Airmen and Guardians from missing Air Force Secretary Frank Kendall’s Nov. 2 deadline for Active-duty troops to get COVID vaccinations, just three weeks away.

Department-wide, 96.7 percent of Active-duty service members have received at least one dose, and 83.7 percent are fully vaccinated, Kirby said.

“The Secretary’s expectation is that commanders will try to get these troops to make the right decision based on information and education,” Kirby added. “It’s a lawful order, so obviously if after all that effort the lawful order is disobeyed, there could be disciplinary action.”

Kirby said commanders have “lots of tools” available short of using the Uniform Code of Military Justice to threaten or punish service members for not taking the vaccine by the deadline imposed by their service.

“Commanders have full authority to use the UCMJ in terms of how they approach disciplinary action,” she said.

The Air Force wants to avoid that.

Kendall and Undersecretary of the Air Force Gina Ortiz Jones “have both been active on their social media accounts in terms of reminding Airmen of the importance, reminding them of the deadlines that we’ve established,” Riley said.

In a Sept. 27 tweet, Ortiz Jones wrote that every day, she receives news of another Department of the Air Force teammate lost to COVID.

With the Nov. 2 deadline looming, and the full Air Force Reserve and National Guard deadline a little over a month away on Dec. 2, Air Force Chief of Staff Gen. Charles Q. Brown Jr. on Oct. 8 also tweeted the deadlines along with a message to the force: “Maintaining mission readiness begins with you.”

Refusing to vaccinate also has operational implications, Riley said, as some countries require vaccination to enter. The Air Force could not immediately confirm whether any Airmen have been unable to deploy to their assignments due to lack of a COVID vaccination.

“We’re not taking any action until we meet that deadline,” she said of those Airmen likely to miss it.

Riley said that until the deadline day, Airmen can request religious or medical exemptions. There is a 30-day processing time to review such requests.