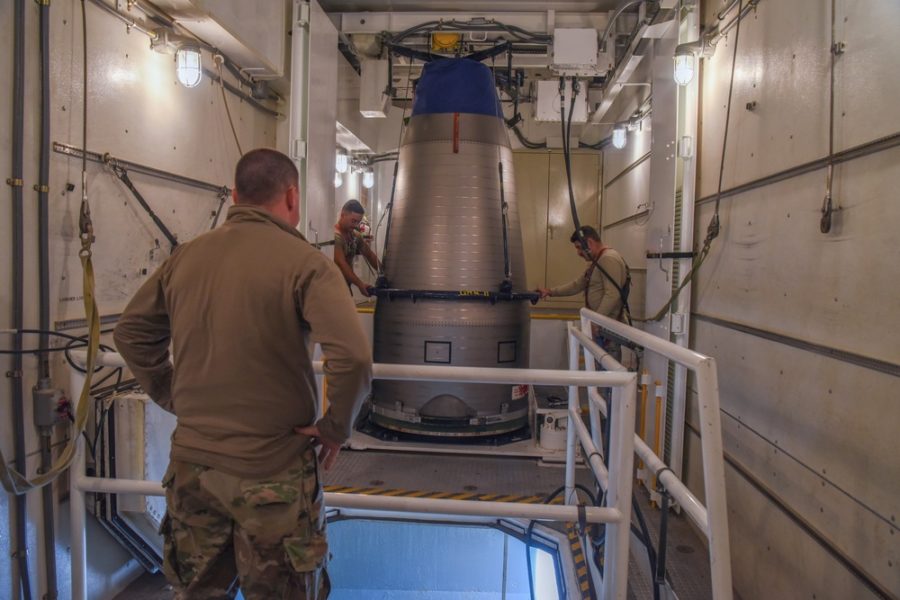 A vast majority of voters believe that nuclear deterrence should be one of the highest priorities for the Department of Defense, with a majority also supporting modernization efforts, according to a new survey.

The survey, commissioned by the Mitchell Institute for Aerospace Studies and run by Seven Letter Insight, asked more than 2,000 voters for their views on national security and nuclear arms, at a time when the Pentagon and Congress are working to replace or update all three legs of the nuclear triad. For the Air Force, this means replacing the aging Minuteman III intercontinental ballistic missile with the Ground Based Strategic Deterrent and introducing the B-21 Raider bomber. At the same time, the U.S. Navy is working to bring on the Columbia-class ballistic missile submarine.

The necessity of the GBSD in particular has been questioned by key lawmakers, and Defense Secretary Lloyd J. Austin III has said the program’s future will depend on the results of a Nuclear Posture Review. The latest estimates place acquisition costs for the GBSD at $100 billion, with a full life cycle cost of $264 billion lasting into the 2070s.

But a full 81 percent of respondents to the survey said they supported “ground-based nuclear capabilities” when asked to choose between two statements, one emphasizing the security benefits of such a system and the other emphasizing the high costs.

Later in the survey, respondents were told that nuclear deterrence makes up roughly five percent of the defense budget and were asked if the U.S. should increase the figure, keep it the same, or decrease it. Roughly 80 percent of all respondents said that five percent figure should either stay the same or increase, with slightly more saying it should stay steady.

Douglas Birkey, executive director of the Mitchell Institute, expressed surprise at the broad support for deterrence despite the cost.

“In my opinion, we bent over backwards to try to be really impartial on this. I was concerned that when people were going to look at this, they would say, ‘You had to juice these numbers. There’s no way they could be this overwhelmingly one-sided.’ And yet that was kind of it,” Birkey said.

Birkey argued that previous polling on the subject has used leading questions or selective information to produce certain responses. In contrast, he said, the goal of this most recent survey was simply to gauge the baseline feelings of voters while providing only the most essential information.

Matt George, head of research for Seven Letter, called the level of support for nuclear deterrence “mind-boggling”—91 percent of respondents said they agreed with the statement that nuclear deterrence is “critical to our national safety and security. It should be one of the highest priorities of the Department of Defense.” More than half of respondents said they strongly agreed with the statement.

“The public perception is that U.S. current capabilities are modern,” George said. “When they find out that that is perhaps not the case, it impacts their perception of what they thought they had.”

When informed that Russia and China have been modernizing their nuclear arsenals, support for replacing Minuteman III rose to 65 percent, compared to 15 percent in favor of refurbishing. When shown an image of missile silos recently built by China, 67 percent favored a new system.

“The American public just doesn’t know a lot about this stuff,” George said. “Maybe that’s good, maybe that’s bad, but what is pretty apparent is that with information, they can make some informed decisions and that they come to conclusions.”

Those numbers also surprised Birkey, who said he thought the high costs associated with recent wars in Iraq and Afghanistan would have soured more Americans on the idea of spending.

The security threat that most concerned survey respondents was a cyberattack. More than 70 percent of respondents said they were extremely or very concerned about a potential cyberattack, either by another nation or terrorist group.

Below cyber threats, the biggest national security threat concerning survey respondents were other countries or terrorist groups obtaining a nuclear weapon, with an actual nuclear attack ranking lower on the list.

The survey, conducted online from Aug. 10 to Aug. 23, has a margin of error of 2.1 percent, with a voter sample mirrored off 2020 voting records and exit polling.