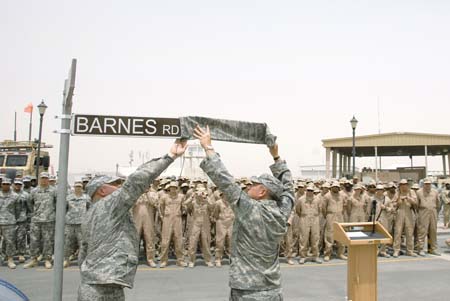 400 service personnel turned out June 10 at a forward base in Southwest Asia to dedicate a street at this location to A1C Eric Barnes who died in an improvised explosive device attack exactly one year ago to the day. Barnes, 20, of Lorain, Ohio, was a vehicle operator deployed from the 90th Logistics Readiness Squadron at F.E. Warren AFB, Wyo. He was killed during a convoy mission about 100 miles south of Baghdad, Iraq. “Eric was one of the brave, one of the courageous, and one of the dedicated airmen who was committed to making a difference,” said CMSgt. Carl Hunsinger, 386th Air Expeditionary Wing command chief, during the dedication ceremony. “He was a good man who will truly be missed.” (386th AEW report by TSgt. Michael O’Connor)