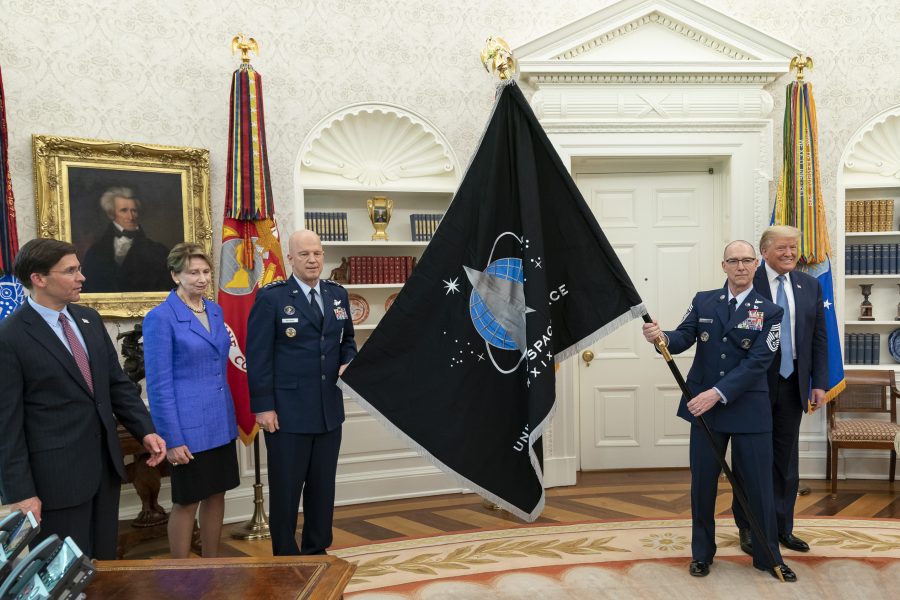 Space Force to Governors: Tell Us Why You Deserve to Host Space Command HQ

The Space Force is asking local leaders across the country to nominate themselves to host the headquarters of U.S. Space Command.

With the Space Force established and headquartered in the Pentagon, the Air Force and Defense Department announced May 15—the same day it unveiled the new service’s flag in a White House ceremony—it has revised how it will establish the permanent location of U.S. Space Command.

John Henderson, the assistant secretary of the Air Force for installations, in a letter to the nation’s governors called for “eligible communities to self-nominate to serve as the host for this critical mission.”

Additionally, the nominations will be evaluated on the following criteria for a total of 100 possible points:

States have until June 30, 2020, to nominate. Once the nominations are received, the Air Force will evaluate the options based on the previous criteria. The top scoring candidates will receive a site visit for additional research. The Air Force expects a final selection for the preferred headquarters in early 2021.

Colorado Springs, Colo., is the current “provisional” home for the command. In 2019, the White House hinted that bases such as Buckley, Peterson, and Schriever Air Force Bases in Colorado; Cheyenne Mountain Air Force Station, Colo.; the Army’s Redstone Arsenal, Ala.; and Vandenberg Air Force Base, Calif., are potential locations.

Space Force Vice Commander Lt. Gen. David Thompson in March said the service was going to take a “holistic look at all of the potential options,” including non-traditional locations.

“We will absolutely establish the criteria we need for each of these organizations and base them accordingly,” he told lawmakers.

Defense Secretary Mark Esper on March 5 said the department had received complaints from lawmakers about the process, and he directed that it be revisited with additional transparency. He said he expects the process to play out after the November 2020 presidential election to try to keep the decision from becoming a political controversy.

Ahead of the May 15 announcement, officials tasked with making their states’ cases all said they plan to show off their state’s spaceflight heritage and close military ties.

Alabama’s contingent plans on “reinforcing the value proposition” in terms of the state’s low cost of doing business and the city of Huntsville’s position as a regional space hub, said Mike Ward, senior vice president of government and public affairs for the Huntsville/Madison County Chamber.

The Army’s Redstone Arsenal in Huntsville was on the Air Force’s original list of six finalists announced last May. It’s home to the Army Space and Missile Defense Command, much of the Missile Defense Agency, and NASA’s Marshall Space Flight Center, while outside the gates are civilian rocket factories.

He confirmed that Alabama was working on a strategy but didn’t elaborate.

In Colorado, on the other hand, business groups are mounting a lobbying and PR campaign that takes pages from the President’s political campaigns, with a Washington, D.C.-based former Trump campaign organizer in charge, a lobbying firm onboard that’s currently connected with the administration, and white-printed T-shirts on a field of red made up for Trump’s rally in Colorado Springs on Feb. 20, one of his last.

Four of the original six bases considered as finalists were in Colorado.

When Colorado’s businesses began to realize the selection process was opening back up, they pivoted from a strategy of mostly writing letters of support to the Air Force to one of talking with people who are influential with the President, said Reggie Ash, chief defense development officer for the Colorado Springs Chamber and Economic Development Corp. and a retired Air Force colonel with his own ties to President Donald Trump’s administration.

“We decided we needed to get some new tools in the toolbox,” Ash said: “A more national PR and political advocacy campaign.” Ash consulted on security and the military’s involvement in the President’s inaugural ceremonies.

“Moving the command costs hundreds of millions of dollars, and it takes several years to rebuild that infrastructure,” Ash said.

While he expects the command headquarters to amount to 1,200 to 1,500 jobs, military and civilian combined, that’s not all it’s worth.

“In addition to that, combatant commands are magnets for corporations, and so we want to draw more corporations here,” Ash said.

That’s according to Dale Ketcham, Space Florida’s vice president for government and external relations, who cited advantages including the space operations at Patrick Air Force Base and Cape Canaveral Air Force Station, plus the fact that Florida is home to three other combatant commands: U.S. Central Command and U.S. Special Operations Command, both at MacDill Air Force Base in Tampa, plus U.S. Southern Command in Doral, near Miami.

He said the state has strategically provided facilities for the Air Force Agency for Modeling and Simulation in Orlando, within reach of the Space Coast bases and companies.

“There is no place in the country where more of that commercial space activity comes together than here at the Cape,” Ketcham said.

Vandenberg Air Force Base in California was the sixth finalist. In a letter to the Air Force last year, three members of California’s congressional delegation cited Vandenberg’s existing space assets and proximity to the Space and Missile Systems Center at Los Angeles Air Force Base as “unique and unparalleled advantages,” according to the San Luis Obispo Tribune.

Also on May 15, the Space Force unveiled its new flag—the first for a new service since the U.S. Air Force became independent in 1947. It features the Space Force logo on a dark background. Air Force Secretary Barbara Barrett, Chief of Space Operations Gen. Jay Raymond, and Space Force Senior Enlisted Adviser Chief Master Sgt. Roger Towberman unfurled the flag during a ceremony at the Oval Office with Trump.