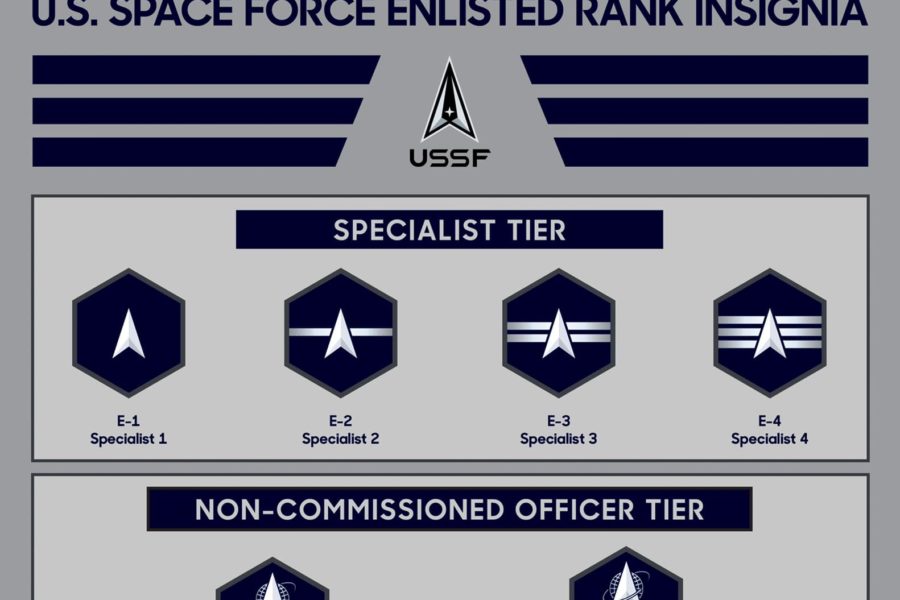 Chief Master Sgt. of the Space Force Roger A. Towberman unveiled the insignia for the new service’s enlisted ranks Sept. 20, with nods to its Air Force roots and heavy use of deltas and hexagons.

The base design for Specialist 1s features a dark blue hexagon, with a white delta in the middle. “The six-sided border surrounding the insignia represents the USSF as the sixth branch of the U.S. Armed Forces,” the service said in a statement. The hexagon has also appeared in the emblems for the service’s three garrisons.

For grades E-2, E-3, and E-4, the insignia adds horizontal stripes, inspired by a proposal from Chief of Staff Gen. Hoyt Vandenberg in 1952 for the Air Force’s insignia, as the service was first developing its own identity separate from the Army. Vandenberg Space Force Base, Calif., is named in his honor.

“We honor his vision with our modern rendition of the classic concept,” the Space Force’s statement reads. “Space Force specialist stripes represent ‘terra firma,’ a solid foundation of skills upon which the Space Force, represented by the Delta, is built.”

For noncommissioned officers, the insignia features traditional chevrons: three for sergeants, four for technical sergeants. It also has the “Delta, Globe, and Orbit,” representing “the totality of our Space Force.”

Senior noncommissioned officers add what the Space Force calls “orbital chevrons” atop a globe. These chevrons represent low-Earth, medium-Earth, and geosynchronous orbits, the service said, with the delta placed above the globe and in orbit to signify the “higher level of responsibility” and “willingness to explore and innovate” of master sergeants, senior master sergeants, and chief master sergeants.

For Towberman’s own rank, Chief Master Sergeant of the Space Force, the new insignia adds back the delta over the globe, as well as a pair of stars and a braid around the Delta, Globe, and Orbit.

Since its founding in December 2019, the Space Force has revealed its emblem, official flag, and service-specific ranks. However, the service is still developing its own uniforms, grooming policies, and PT standards. Officials have said the new uniforms will be revealed by the end of 2021.