Skip to content
Members of Space Launch Delta 30 pace one another during the monthly Delta Dash on Nov. 5, 2021 at Vandenberg Space Force Base, Calif. The monthly SLD 30 run acts as a method for members across the base to build upon their fitness and comradery while fostering espirit de corps within the ranks. U.S. Space Force photo by Staff Sergeant Draeke Layman
Expand Photo 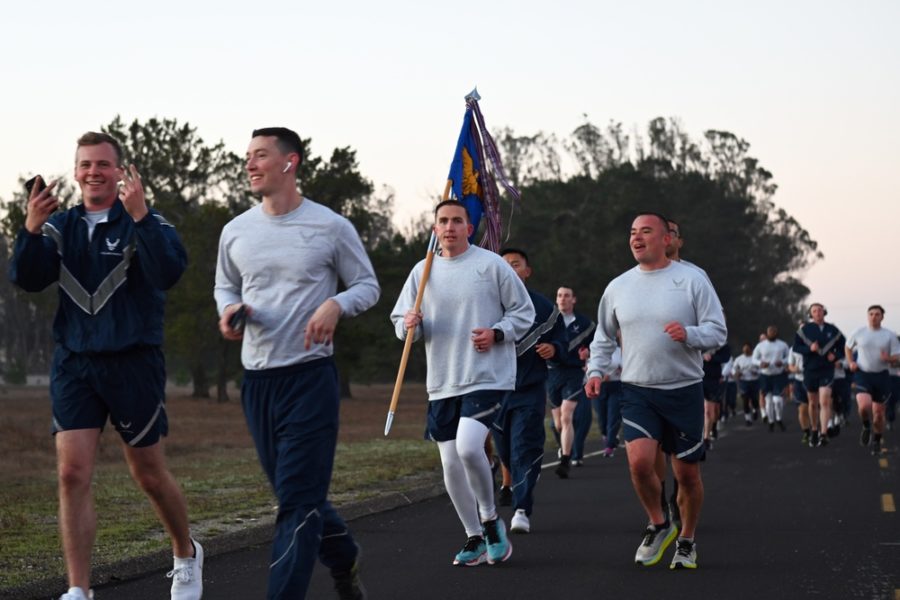 The Space Force plans to officially implement a new “three-part fitness program” as its replacement for conventional PT testing by 2023, preceded by a yearlong “beta” phase in which Guardians will be able to evaluate the program, the service announced in a memo sent to service members on March 16.

The memo, signed by deputy chief of space operations for personnel Patricia Mulcahy, offers new details on the Space Force’s approach to fitness, which leaders have promised will be holistic, moving away from annual PT tests.

In the meantime, Guardians will have to complete one more “diagnostic fitness assessment” based on the Department of the Air Force’s Physical Fitness Program before the end of 2022. These assessments won’t be used to determine retention or promotion eligibility or as a basis for any sort of punishment, the memo states.

Meanwhile, the new program “promotes physical activity, lifestyle/performance medicine principles, and increased education and awareness to ensure all Guardians are mentally and physically prepared to perform.” It will use “wearable technology and a software solution paired with fitness/workout regimes and preventative health practices.”

The use of wearable fitness trackers has been hinted at before—top-level Guardians including Brig. Gen. Shawn N. Bratton, commander of Space Training and Readiness Command, STARCOM senior enlisted leader Chief Master Sgt. James P. Seballes, Chief of Space Operations Gen. John W. “Jay” Raymond, and Chief Master Sergeant of the Space Force Roger A. Towberman have all participated in a pilot program in which they wore rings to track things such as heart rate and sleep.

On the software solution front, the Space Force has signed a contract with fitness platform FitRankings “to create a digital community to connect fitness wearables,” according to a company press release.

FitRankings, based out of Austin, Texas, allows users to record their workouts on a personal profile and connect with other users in their community. USA Cycling, USA Triathlon, Under Armour, and grocery store chain H-E-B have all used the platform.

“We agnostically connect to all of the latest wearables and fitness apps, wherever the market goes,” FitRankings CEO Patrick Hitchins told Air Force Magazine. “I think the military and DOD has probably looked at this space and probably struggled with the idea that, ‘well, do we have to go out and buy everyone a Garmin?’ And really, I think that’s the old school mentality for the military, like, ‘Hey, let’s go out and buy hardware.’

“What’s refreshing here in working with the Space Force and their senior leadership is they understand the need to actually invest in the software and platform first, and then the intent is to actually provide choice architecture to the Guardian to pick the wearable that they may want. But again, we connect to all of that.”

In addition to importing data from across a broad array of apps and trackers, FitRankings also has a way for organizations to standardize that data—to be able to give credit to users for a broad range of exercises.

MET minutes, or METs, calculate the intensity of an activity compared to a person’s resting state—the more intense the physical exertion, the more MET minutes. Using guidelines from the CDC, FitRankings incorporates MET minutes into its platforms, Hitchins said.

“What we’re working on is basically a way to take any activity, convert it to a universal metric called a MET minute, and then say, ‘Hey, we don’t care what type of activity you do. As long as you complete X number of MET minutes per week, you’re meeting a standard,’” Hitchins said. “Now, that’s still very TBD on what that looks like for the Space Force, and you can ask them, but I will say it’s a major base function of our platform.”

The Space Force has yet to say whether it will use MET minutes as a universal standard or what kinds of exercises it will require Guardians to do, if any, but leaders have indicated they want to take a more expansive approach than the standard aerobic run, sit-ups, and pushups that has defined the Air Force physical fitness program for decades—even the Air Force has shifted from that approach recently, introducing alternate exercises Airmen can perform as part of their PT test.

“I really feel like when I listened to the leadership of the Space Force, they understand that the human weapon system is the most important weapons system in the force. And really, I’m not going to speak on their behalf … but my feeling here is that the Space Force is really a new force trying to break with this model of a once-a-year, twice-a-year fitness test, to be a force of the future.”

Through FitRankings, organizations can start “challenges” in which groups or individuals can compete head-to-head to accomplish certain fitness goals. The platform also allows for users to publicly share their workouts and connect with other users, encouraging a “culture of fitness.” At the same time, users can adjust their profiles to remain publicly anonymous, to promote positivity and discourage public shaming.

At the same time, managers can have access to dashboards that show varying levels of data on the people they are supervising. The extent of that data can be adjusted to show only group-level totals or provide a general assessment of an individual’s fitness level—Towberman has raised the possibility that a Guardian’s wellness may be designated green, amber, or red “so that the chain of command and the Guardian know where they’re sitting all the time with regard to readiness.”

Such a system may provide a more comprehensive overview than a yearly test, but it may also raise some concerns over privacy and sensitive data.

“For sure, it’s important,” Towberman said of privacy concerns. “Also, it’s sort of in the conditions of employment on the team, right? So as long as you understand what you’re getting into, I think you’ve got a lot less concern. We’re already using this type of technology in other communities where the desire to be in that community is strong enough to say, ‘Hey, I’ll let you know what my heart rate is every morning because I want to be part of this team.’ So I think there’s some of that, but really, this is pretty simple stuff. This is red light, yellow light, green light.”

Towberman added that the data the Space Force will track will be relatively broad, not honing in on Guardians’ specific habits.

That’s in line with what Hitchins believes is necessary to ensure buy-in from users.

“If you roll something out, and you’re saying, ‘Hey, guess what, connect up your Garmin or your Apple or your Oura ring, and now we’re just going to be watching you and tracking you,’ no one’s going to like that,” Hitchins said. “So the final part of my conversations is, how to create culture around this data that benefits the end user—the Soldier, the Guardian, etc.”