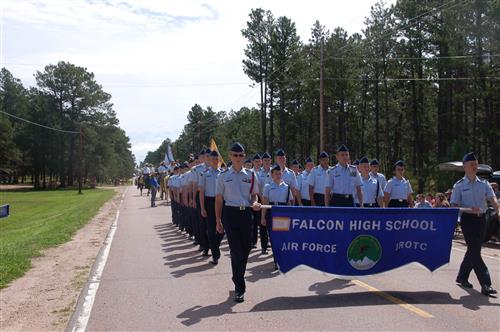 Space Force JROTC to Get First Units Starting This Fall

The Space Force and the national Air Force Junior Reserve Officer Training Corps announced the first 10 JROTC units to convert their affiliation from the Air Force to the Space Force.

Beginning in the fall semester, 10 schools will convert to produce the inaugural cohort of high school SFJROTC units:

All 10 schools converting volunteered. Selections were based on proximity to Space Force or related government agencies, including Space Force bases, facilities, and centers of influence, such as U.S. Space Command Headquarters, or NASA, Missile Defense Agency, and other locations, or where the current instructor cadre had prior space operations experience.

Space Force JROTC aims to convert a total of up to 100 units over the next couple of years, according to Anthony “Todd” Taylor, chief of the program development division at Headquarters Air Force ROTC, in an email response to questions. Budget considerations could affect final numbers, he wrote.

The Space Force JROTC curriculum is not yet defined. “We anticipate a more defined space focus within the curriculum,” Taylor said. “AFJROTC’s curriculum is approximately 40 percent leadership, 40 percent aerospace science, and 20 percent fitness and wellness. Space will of course take lead in the aerospace science area, such as our existing space textbook, which covers the space environment, space exploration, manned and unmanned spaceflight, space technology, as well as commercial use of space.”

About 1,200 JROTC cadets, or 1 percent of the entire AFJROTC program population, will be affected by this change.

“We are thrilled to collaborate with U.S. Space Force and these 10 superb high schools, to inspire the next generation of space visionaries and leaders,” said Scotty E. Lewis, deputy director at Air Force Junior ROTC Worldwide. “What these Space Force Junior Reserve Officer Training Corps instructors, school administrators, and intrepid Guardian cadets will do tomorrow will undoubtedly help secure our nation’s security in the future.”