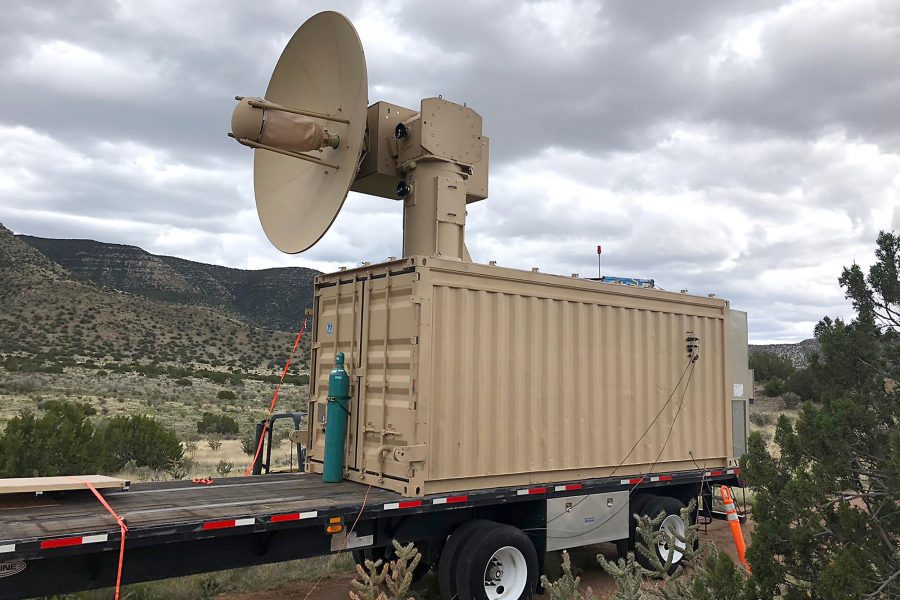 Some Directed-Energy Weapons Show Promise While Others Slow

Air Force officials are still looking to perfect directed-energy weapons to use against the low-tech threat of small drones before scaling up lasers and microwaves to take out cruise missiles.

The Air Force’s high-power microwave weapon known as the Tactical High-Power Microwave Operational Responder, or THOR, is heading to the Army’s White Sands Missile Range in New Mexico for a last system check before it ships overseas for real-life testing, the Air Force said July 8.

THOR is designed to simultaneously take down several small drones within short range by frying their electronics with a wide electromagnetic beam. Built by the Air Force, BAE Systems, Leidos, and New Mexico-based Verus Research, THOR has a video game-like interface, can be carried in a C-130 and quickly assembled on land, and can tap into other detection and targeting systems or use its own to attack small unmanned aircraft.

The microwave weapon is one option to protect military bases from commercially sold drones that can spy on or attack American installations overseas. An aircraft like that costs only $1,000 but can put an entire squadron of F-22 jets at risk, Don Shiffler, chief scientist in the Air Force Research Laboratory’s directed energy branch, said July 7 during an online event hosted by Booz Allen Hamilton. The Air Force previously said THOR would be one of five different technologies that would participate in a long-term overseas test starting this year.

While hailed as game-changing technology, THOR has been foiled by at least one enemy so far: Cheeto dust.

“We thought, ‘Well, we should have everything touchscreen-operated,’ ” Shiffler said. “Except you find out that that doesn’t work for warfighters who are pulling a long shift, because they do things like eat Cheetos while they’re sitting there working. And then the touchscreen does not work.”

Airmen now control THOR’s antenna using a handheld remote control and fire the microwave ray using a laptop, according to the Albuquerque Journal. The system itself cost about $15 million to develop.

Shiffler added that the Self-Protect High-Energy Laser Demonstrator, or SHiELD, program is having difficulty shrinking a powerful laser into a pod compact enough to fly on an airplane. SHiELD would protect aircraft from incoming cruise missiles in flight.

Defense News recently reported SHiELD is preparing for its first flight test in 2023, two years later than planned. Boeing, Lockheed Martin, and Northrop Grumman are respectively working on the pod, the laser, and the beam control system. In the past, the Air Force envisioned the laser pod would work on an F-15 fighter jet. The service has also mulled adding lasers to tanker aircraft and is working with U.S. Special Operations Command to put a laser on the AC-130J.

Over the past few years, the Air Force has refined its once-broader vision for how it could use directed energy and how soon. Defeating drones is taking priority over creating more powerful lasers that could keep a cruise missile away from a base, or a microwave-wielding missile.

AFRL is now vetting directed-energy and kinetic weapons that could take out cruise missiles in a 2021 experiment, according to Michael Jirjis, chief of base defense experiments in the Air Force’s Strategic Development Planning and Experimentation Office. He did not say which systems the service is considering.

“What I expect to get laser weapons to the goal line has been the humble, but important and very worrisome small drone threat,” Air Force acquisition boss Will Roper said last month. “They continue to show up, they’re difficult to attribute. We don’t know who is sending them to our installations and tests and things of that nature, and we can’t afford to shoot missiles at them.”

Editor’s note: This story has been updated to reflect that THOR is going to White Sands Missile Range for a system check, not a capability demonstration.