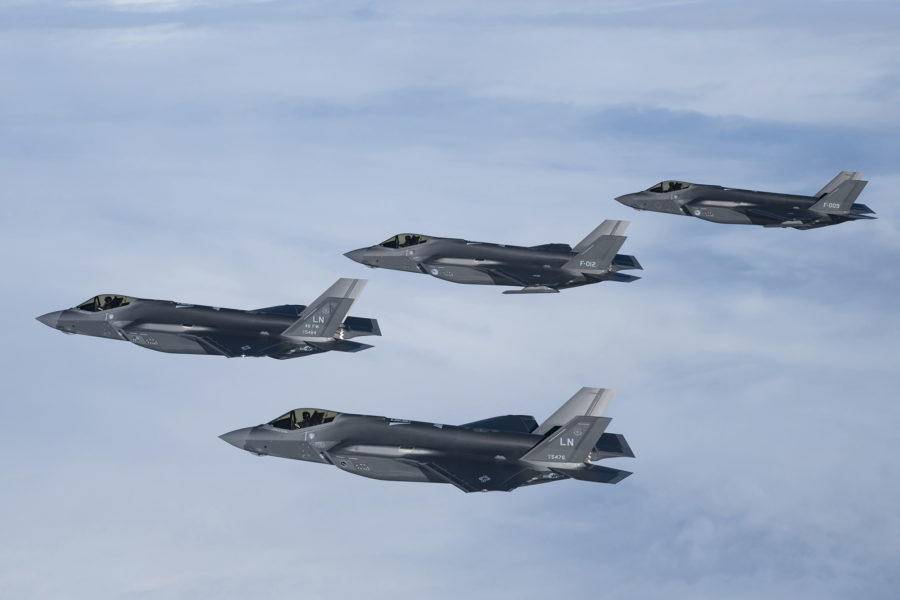 A contract for F-35 Lots 15-17—in negotiation for more than a year, and six months past its expected conclusion—continues to elude Lockheed Martin and the F-35 Joint Program Office, due to disagreement over the costs of the pandemic and inflation, Lockheed leaders said April 19. Despite the U.S. military services asking for fewer F-35s in the fiscal 2023 budget request, Lockheed thinks it can maintain its target of delivering 156 of the jets per year with foreign orders.

“Our teams are diligently working with their [JPO] counterparts to achieve closure on his critical milestone,” Lockheed CEO James D. Taiclet said in a quarterly earnings call with reporters.

“Both parties are striving to finish negotiations in the near term. So we remain confident in our four year projections,” he said, but “there could be a timing impact” due to “financial constraints.”

Lockheed Chief Financial Officer Jay Malave said it might cost “$500 million plus” to keep the line moving without a contract in the second quarter.

“If it further extends, obviously, that will go up,” he said. Pressed for details, Malave said, “We probably have to revisit later in the quarter to see how things are progressing, and I think we can update accordingly then.” He said the company is “encouraged that we can be able to close this in a relatively short period of time.” The amount he quoted, “we would recover in the balance of the year, assuming a successful negotiation.”

Asked to explain the long delays in the contract negotiations, Taiclet said it was due to “significant changes in the underlying cost factors of bidding for the next three lots … So, yes, we’ve been going at this for a number of quarters, but that’s because the cost baseline has been moving during that time and we both have to agree on where we think it’s going to end up.”

Those factors include “COVID impacts” and “inflation, which is even a more recent phenomenon,” he said. Lockheed has to get feedback from all aspects of its supply chain, “to see what those impacts are going to be.” The government then has to verify that those estimates are legitimate, and while that’s happening, inflation rates move again, Taiclet added.

“So, this has been longer than normal because the underlying ground has been shifting on [the] most important assumptions that go into the negotiations.”

He said Lockheed’s negotiating strategy hasn’t changed, and that is to do so “on the basis of actual costs information and data that provides our shareholders a fair margin … as well as a government-attractive contract.”

He added, “We need to coalesce on a cost base.”

The F-35 JPO did not offer a comment by press time.

Lt. Gen. Eric T. Fick, F-35 Program Executive Officer, acknowledged at a March defense conference that no deal was yet in sight, after he predicted a handshake agreement as early as last October.

Both Lockheed’s Gregory M. Ulmer, executive vice president for aeronautics, and Fick have said that the unit price of the F-35, which fell below $80 million each in the last contract, will go up in Lot 15-17 due to inflation, more sophisticated equipment, and a smaller overall buy, but they have not said how many aircraft are under negotiation.

“There’s also … some lower quantities that were initially projected for that lot,” Taiclet said. “We’re working with the U.S. government and also the international partners to see if there’s ways to bolster that number. But right now, what we’re working with is a lower number in negotiation.”

Lockheed set a goal of 156 F-35s a year and Taiclet said that goal can still be reached, given that Germany has opted to buy 35 F-35s, and Canada is moving toward a purchase of 88 aircraft. Other countries are also showing interest, he said.

“We’re pretty confident in that 156 per year plan that we had laid out,” Malave said, based on “the international customers” Taiclet mentioned, which “provide … a little flexibility to really shore up that production schedule.”

That, and 19 additional aircraft that showed up in the Air Force, Marine Corps, and Navy unfunded priority lists make Lockheed “very comfortable in our ability to maintain” 156 a year, Malave said.

Taiclet said Russia’ invasion of Ukraine clearly sets the stage for higher defense spending, but it’s too soon to estimate by how much. He said the new emphasis on high-level deterrence is consonant with Lockheed’s product line, so the company is likely to do well, in the coming years. He also said it’s clear the current Administration is disinclined to look favorably on mergers and acquisitions, so Lockheed will be spending most of its free cash on stock buybacks.

The Federal Trade Commission sued to block Lockheed’s acquisition of Aerojet Rocketdyne in February, and Lockheed elected to drop the merger.

Taiclet said Lockheed expects continued growth and noted a $4 billion classified program contract in the first quarter, saying that the secret project is “one of the pillars of growth” in the company.