Save Science and Technology 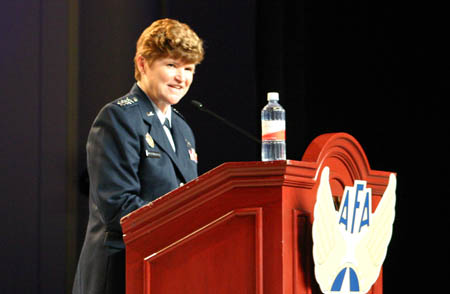 The science and technology topline in the Air Force’s coming program objective memorandum—the service’s five-year spending forecast—will be “fairly constant” with what it has been for the past few years, said Air Force Materiel Command chief Gen. Janet Wolfenbarger on Monday at AFA’s 2013 Air and Space Conference in National Harbor, Md. While she declined to offer specific numbers, Wolfenbarger said “even in a drastically downsized environment, there has been a consistent messaging” from Air Force and Defense Department leaders “that we need to preserve an S&T budget that protects our ability to execute our missions into the future.” Officials preserved that level “even as we have gone through some real difficult decision-making” on POM deliberations, she said. “I really feel from a budgetary perspective,” said Wolfenbarger, that “we’ve got the endorsement of the senior leadership at every level” in the Defense Department not to eat the technological seed corn.