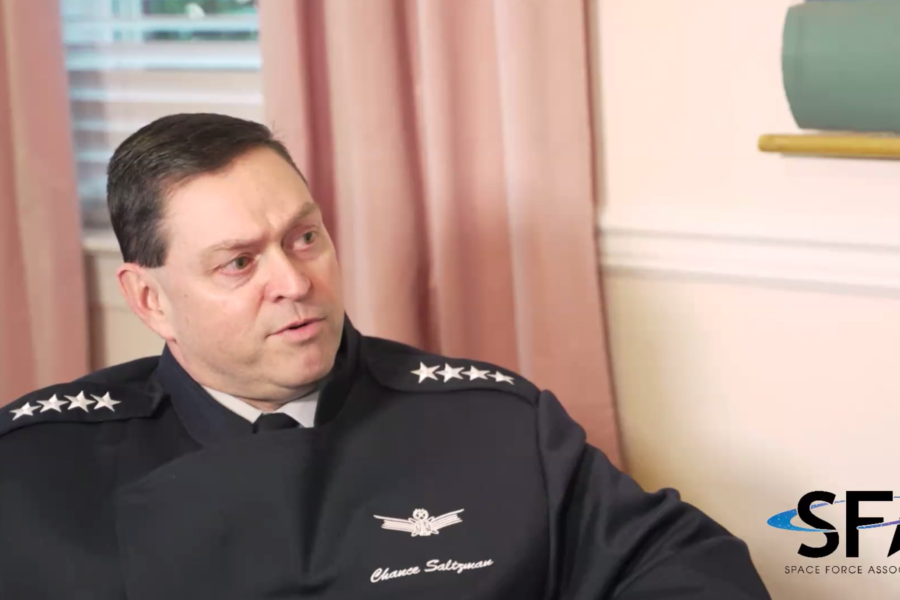 With the Space Force now in its fourth year of existence, Chief of Space Operations Gen. B. Chance Saltzman wants to develop the service’s essential warfighting processes—and make sure Guardians can perfect them through practice.

“We have to build the infrastructure and the processes and procedures to make sure [Guardians have] got what they need,” he said. “Whether it’s the test and training infrastructure, simulators that can replicate adversary threats and the interactions you would get, multiple units working together to solve operational challenges—all of that needs to take place before we get into an actual conflict, so that our operators are fully ready. That’s really the priority that I’m going after.”

Watching Russia’s invasion of Ukraine, which bogged down despite Russia’s superior forces and technology, reinforced the importance of high-quality training and tactics, Saltzman said. “The side that practices the best will have an advantage early in the conflict,” Saltzman said. “So that’s what I want to do, make sure we have the skills and the experience on day one of the conflict.”

Systems and technology count a lot, but if that’s the sole focus, he added, “you only [have] half the equation.”

The Space Force needs to develop and validate its approach to combat and dominating in the heavens. “It starts with operational concepts,” Saltzman said. “You say, how is it that we will control the space domain so that we can do what we want to do with space assets, achieve the effects that we want to achieve, while denying the adversary the ability to use their space capabilities to target ground forces and maritime forces and air forces? That’s the classic definition of control of the domain.”

The Space Force has a capstone doctrinal document, “Spacepower,” and a commander’s strategic plan for Space Operations Command. But the service is still in the process of fleshing out and codifying its operational concepts. And while control of the domain remains the goal, much like the Air Force seeks air superiority, there are specifics that need to be considered in space, Saltzman said.

“What’s the plan? And we have to test those [concepts] to make sure we don’t create debris fields,” Saltzman said. “We’re trying to be responsible users in space, but we still have to be able to disrupt an adversary. So how do you do that?”

Once those core concepts are finalized, he added, “you start to look at the systems you have and build the tactics, techniques, and procedures that the operators will need to employ.”

TTPs, as those considerations are often called, cover such basic considerations as “How do I move satellite communications beams? How do I detect a rendezvous proximity opposite to what an adversary is trying to do? How do I do that in real time?” Saltzman said.

And while those tactics can be developed in theory, they also need to be rigorously tested in a way that proves they work, Saltzman said. That’s why investing in test and training infrastructure is so essential.

“You have to practice it on a range where you can control all the inputs,” Saltzman explained. “You have to practice it against what we would call an opposition force—aggressors—to use the vernacular, because it’s a thinking adversary, and [the fight] is going to be dynamic. How do your operators respond in that dynamic adversarial set of conditions?”

Building the range of skills and experience necessary to optimize the Space Force will take time. Saltzman is eager for Guardians to test and train their skills inside the Space Force, but he also wants them to capture experience outside the service’s bounds.

“I want to make sure that when you come into the Space Force, your skills and your knowledge of technology, for example, doesn’t atrophy simply because you’re part of the military now,” Saltzman said. One way to do that is to forge deeper partnerships with industry and academia to help ensure Guardians stay “current on what the state of the world is, the state of the art is in terms of technology and leading edge capabilities.”

That might entail short tours of duty in industry, where they can be exposed to what the commercial sector is doing. “And tjhen they come back in and bring that knowledge with them,” Saltzman said. “So we keep things fresh inside the Space Force.”