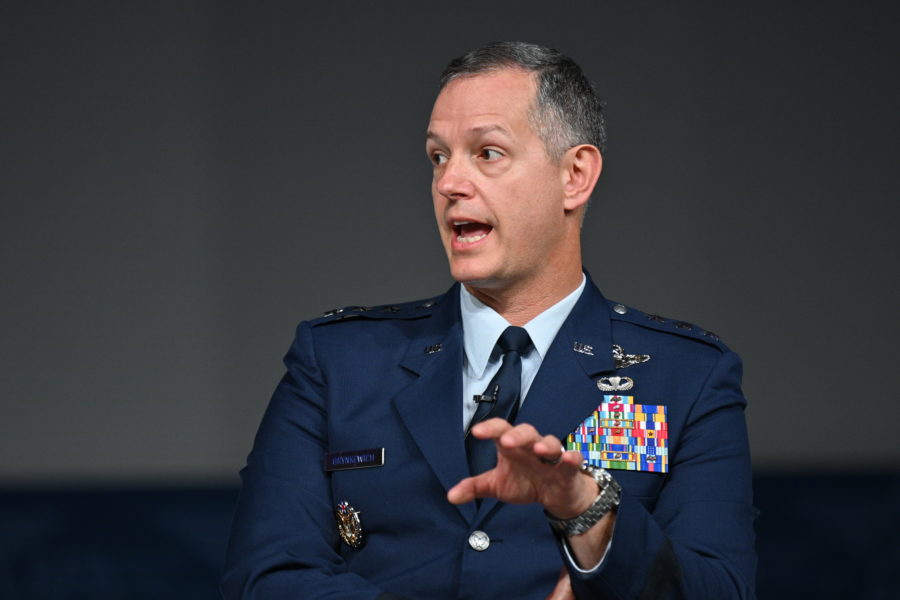 The Russian Air Force has become “more aggressive” in Syria as tensions have risen over Moscow’s invasion of Ukraine, the top Air Force general for the Middle East said.

The U.S. and Russian militaries have operated in an uneasy coexistence in Syria since the Kremlin sent forces there in 2015 to support Syrian President Bashar al-Assad.

But in recent months, Russian transport planes have flown near Al-Tanf Garrison in southeast Syria—where U.S. troops have been working with Syrian fighters battling ISIS militants—without notifying American commanders as done in the past, Grynkewich said at AFA’s Air, Space & Cyber Conference on Sept. 19.

There is “a disregard for our presence at Al-Tanf,” Grynkewich said. “They would at least give us a phone call. They stopped giving us that phone call now.”

Russian aircraft have also flown into eastern Syria, where U.S. forces have been partnering with Syrian fighters who are battling ISIS. Russian combat aircraft have been in both areas.

Grynkewich, who took command July 21, said Russia’s more aggressive posture appears to stem from the arrival of Russian commanders who had been involved in Moscow’s troubled invasion of Ukraine and are trying to make up for their poor performance there. “To me, it’s very, very concerning. I believe that some of those Russian leaders are trying to rebuild their reputation.”

The U.S. military operates in Syria with its Syrian partners as part of Operation Inherent Resolve. While ISIS’s physical caliphate has been destroyed, remnants of the group are trying to make a comeback.

Russia and the U.S have maintained a deconfliction communications line to prevent an inadvertent confrontation between the two sides. U.S. aircraft have flown into areas that have been generally controlled by the Russians, but they have done so in pursuit of ISIS militants and after notifying Russian commanders.

“The qualitative difference to me is, when we go into airspace, we always give them the heads up,” he said. “And then we’re doing it for the purposes of defeating ISIS … The Russians come back at us, and, as far as we can tell, there is nothing that they’re doing qualitatively against ISIS when they come into those spaces.”

A U.S. Navy F/A-18 shot down a Syrian Su-22 in June 2017, but U.S. and Russian aircraft have never clashed. U.S. air and ground forces pummeled Russian mercenaries who threatened U.S. forces and the Syrian SDF fighters they were working with in February 2018, killing several hundred. Russian commanders insisted they were not aware of the operation but later asked permission to retrieve the bodies.

When Russian aircraft enter what the U.S. regards as its airspace, American warplanes intercept them.

“We are not here to escalate. We are not here to make the situation worse than it is,” Grynkewich said. “But we do have an obligation to be in a location where we can monitor the Russian behavior, so we close within several miles. We monitor their behavior as they go through the airspace and ensure that they’re not going to be a threat to our forces.”