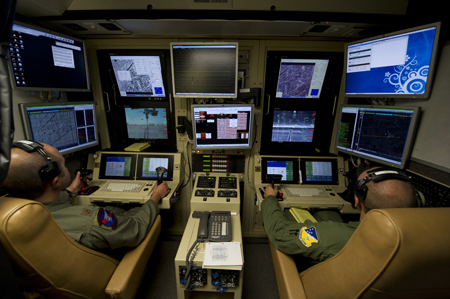 and instructors came together earlier this month at Holloman AFB, N.M., to set a non-combat record by simultaneously flying 10 remotely piloted aircraft, announced base officials. Members of the base’s 9th Attack Squadron, 29th AS, and 6th Reconnaissance Squadron established the mark on Oct. 2 by having six MQ-9 Reapers and four MQ-1 Predators aloft at once during training, according to an Oct. 15 Holloman release. These units train Air Force MQ-1 and MQ-9 pilots and sensor operators. The squadrons recently increased their training capacity so they can have 10 RPAs airborne at once in order to support the service’s burgeoning RPA aircrew training requirements, states the release. “We finally have the physical capacity to accomplish our mission to increase programmed flight training and develop the best possible RPA crew members,” said Col. Kenneth Johnson, commander of Holloman’s 49th Operations Group. (Holloman report by A1C Michael Shoemaker)