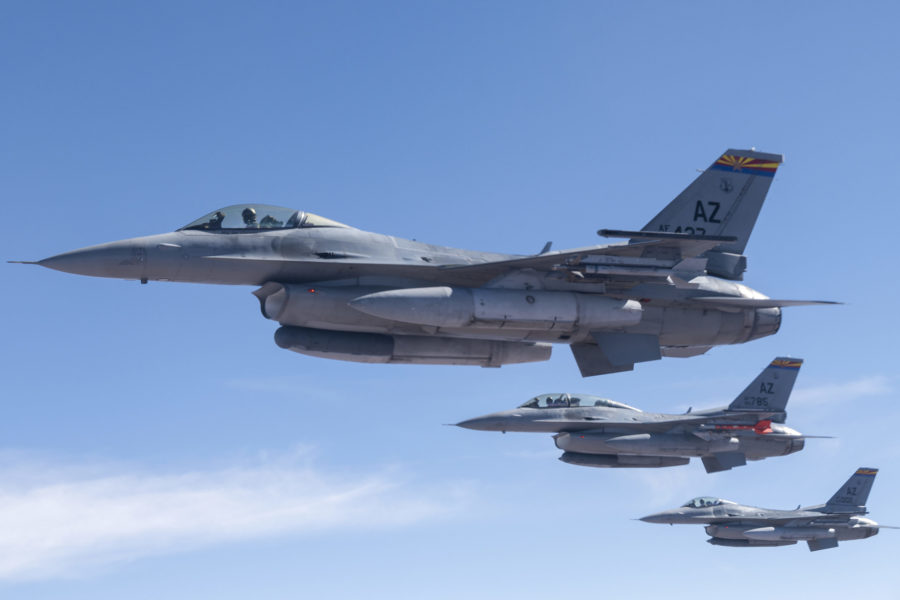 The Ukrainian Air Force has withstood six months of war against a much larger and more sophisticated Russian force, but U.S. lawmakers worry Russia could gain air superiority as the war grinds on unless Ukrainian pilots are equipped and trained to fly modern Western aircraft, such as the F-16.

Romania, a NATO member, offers a case study for how that could go. Its air force is completing a transition from Soviet-era MiG-21s to U.S.-built F-16s, providing a model for training pilots for the switch, according to U.S. Airmen involved with the training. The U.S. Air Force’s Air Education and Training Command even has a course for partner and ally nation pilots that could be tailored for Ukraine.

At Morris Air National Guard Base, Ariz., Eastern European pilots from Poland, Romania, Bulgaria, and Slovakia have been taking the six-month ANG International Initial Qualification Course (Advanced) for more than two decades. In fact, today’s young Romanian pilots have never flown MiGs, which are being phased out of Romania’s Air Force as it seeks to expand its fleet of F-16s and eventually to buy F-35s.

The United States and some 50 international partners are already helping Ukraine to modernize its military force with Western, NATO-standard weaponry. But while Ukraine has repeatedly asked for Western fixed-wing fighter aircraft, that request has thus far gone unheeded.

U.S. lawmakers, including Air Force veteran Rep. Chrissy Houlahan (D-Pa.) have called for the Defense Department to begin training Ukrainian pilots on the F-16s, anticipating that airplanes will eventually be offered. A bill now stalled in Congress would provide $100 million for the training.

Col. Brant A. Putnam, vice commander of the 162nd Wing at Morris, has seen generations of Eastern European fighter pilots such as those from Romania graduate from U.S. training programs, and he believes Ukrainians would excel in the program.

“Based on what I’ve heard, I think that they’d fit right in with what we do here,” he told Air Force Magazine in a July interview.

After two decades of this kind of training, the students from former Warsaw Pact countries such as Poland and Romania have changed. “These young guys … haven’t flown any Russian airplanes,” said Putnam. “Typically, their English is better, and we run them through to the basic course, and they are, for all intents and purposes, just like the U.S. guys who train alongside them.”

Making the transition from Russian to Western aircraft, however, requires a mind shift. “It’s not easy,” he said. “It depends a lot on how long they’ve been trained in the MiGs, because a lot of what comes along with their training is their mindset,” he said. “They’re into the Soviet system that goes along with those aircraft, which is typically a lot of close control. They don’t make a lot of decisions. They’re not used to being super flexible.”

But in the U.S. Air Force program, pilots must learn to be decision makers. “They can’t sit up in the airplane and just drive and wait to be told what to do,” Putnam said. “They have to actively direct their aircraft and think about what it is they’re trying to accomplish.”

“I’ve been trained in the mindset to fly the MiG-21 before,” said Beraczko of his Romanian Alpha Jet training, which has the same avionics as the MiG-21. He’s also familiar with the MiG-29 flown by Ukraine.

“Getting [to] the F-16 from the MiG-29—it’s a way different airframe,” Beraczko told Air Force Magazine by phone from Tucson. “The heads-up display, even the missiles they are running, they have different cool times, different intelligence. Bear in mind they need to apply different tactics. Air tactics are different.”

Romania joined the NATO Partnership for Peace in 1994 shortly after independence and became a full NATO member 10 years later. Each step was a shift to the Western way of warfare.

From trained pilots and maintainers to required infrastructure to a boneyard of spare aircraft, Romania has been working on its transition to the F-16 for nearly a decade.

“Even we struggle at this point, and we started enhancing and getting the F-16 like seven or eight years ago, and we’re still not yet there,” Beraczko said. “We are so close; we are wanting and willing to be there as personnel, as maintenance, as even a force.”

A U.S. Air Force spokesperson said foreign countries seeking to train fighter pilots in the United States would typically begin with a few weeks in the T-6 trainer aircraft before spending a few months flying the faster T-38. Once the training is complete, the pilot can enroll in the basic course for combat pilots.

The majority of the course uses the F-16C model, since most pilots will be flying single-seat aircraft when they return home.

Graduating students reach a wingman level and are expected to continue flying with close supervision for 500 hours.

In Tucson, Putnam said AETC has created tailored courses to meet the needs of specific countries.

In June, Rep. Houlahan and fellow Air Force veteran Rep. Adam Kinzinger (R-Ill.) introduced legislation to finance the training of the Ukrainian fighter pilots on the types of American aircraft that could be given to Ukraine.

Support for the bill has not waned, Houlahan told Air Force Magazine, but the administration has refrained from taking a decisive first step on a path that could take many months or years.

“Russia could turn the tide of the war at any moment, which means time is one of our most valuable assets and we must use it wisely to ensure the people of Ukraine are victorious,” she said.

In an Aug. 24 Pentagon press briefing, Undersecretary of Defense for Policy Colin H. Kahl said Defense Secretary Lloyd J. Austin III has directed a team from his office, the Joint Staff, and U.S. European Command to work with Ukraine to help design a future Ukrainian Air Force, but he expressed reservations that such a force can be assembled in the short-term.

Still, Houlahan and other lawmakers believe defense officials need to be having conversations about pilot training now.

“I’m frustrated by the lack of progress here on seriously considering this viable option,” she said.