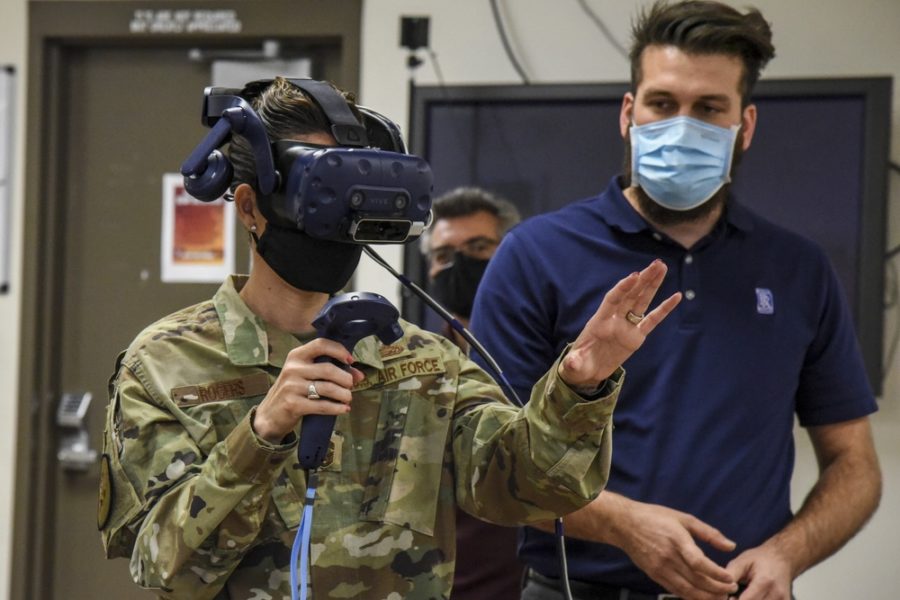 As a senior vice president with storied engine maker Rolls-Royce North America, Roberson is an ambassador for some of the most ground-breaking technologies to emerge in propulsion in recent decades, including digital engineering, alternative fuels, additive manufacturing, and a host of other innovations.

“We have demonstrated that intelligent application of trusted, validated digital engineering capability significantly reduces risk within an engine development program.”

Computer-aided design has existed for decades now, but designing and modeling entire systems digitally is revolutionizing the ability to adapt, improve, and enhance modern systems, and do so at a pace unheard of in the past. “We can reduce costs, we can save time, and we can produce engines in a much more efficient way,” Roberson says.

An aerospace engineer by education, Roberson grew up as a Navy brat and immersed himself in the Air Force directly after high school, enrolling at the U.S. Air Force Academy. Over the next 34 years he rose to lieutenant general, commanding Air Education and Training Command in his final tour. Even now, he has a vested interest in the Air Force, with a son and son-in-law on active duty, and ensuring they are part of the best-equipped, most ready, most effective fighting force fuels his passion for his current role.

Contributing to training and readiness is one way Rolls-Royce fulfills that passion. “Our AE 2100 engine, which powers the C-130J, can now be maintained in a more effective and less costly way,” he says. “We created a virtual reality maintenance training system for the Air Force that maintainers can literally put on and then either train or actually perform maintenance using that. It’s like a digital assistant that can speed up processes, help them understand what needs to be done, verify that the processes are being done in the right way.”

The tool enhances inspections and can reduce wear and tear and potential injuries by reducing the necessity to remove engines from the aircraft.

Rolls-Royce has also invested in its own innovation and development arm, LibertyWorks, an engineering powerhouse created to tackle the most demanding requirements and come up with innovative solutions. “These are phenomenal engineers,” Roberson says. LibertyWorks projects span the range from wringing additional power from existing systems to developing propulsion technology for entirely new kinds of systems.

“When there’s a challenge that warfighters are facing, LibertyWorks is the place to go to solve that problem. They can take a requirement that sounds impossible and make it real.”

Case in point: LibertyWorks is developing engines to power small, attritable unmanned systems, which will have to fly as fast as an F-35 but won’t have to be as maintainable because the aircraft itself won’t be designed to last as long as a Lightning II. The unit is also working on reusable hypersonic engines and on energy initiatives.

“Look, just like the Air Force, Rolls-Royce is absolutely committed to the environment,” Roberson says. “We have publicly stated that we will be net-zero carbon use in our operations by the year of 2030, which is really not that far away. And we are working hard on alternate fuels for propelling flight and producing power—synthetic aviation fuels, bio-aviation fuels, even electricity and hydrogen, which when you burn it, becomes water.”

Rolls-Royce is already the leading producer of all-electric and hybrid-electric aviation systems and set a new world speed record for an electric propulsion aircraft.

The proof-of-concept aircraft—called “Spirit of Innovation” —set a world record for battery powered flight, topping 345 mph. Spirit of Innovation, about the size of a World War II Spitfire, is powered by liquid-cooled lithium-ion batteries. “It’s the start of a journey to make electrification happen,” Roberson says. “We’re propelling the future.”