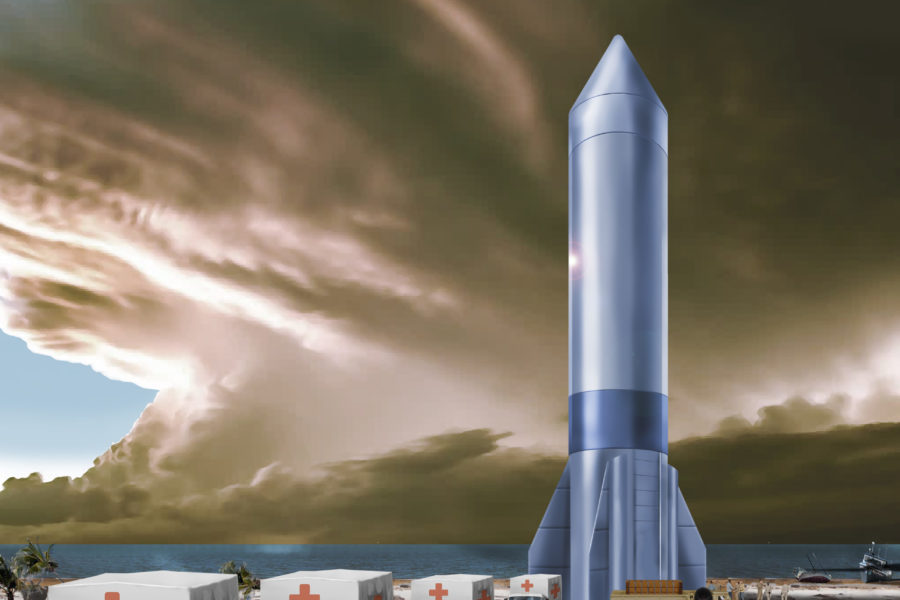 The Air Force wants to soon be able to deliver cargo from space, and it is putting real money behind the effort.

The Department of the Air Force announced June 4 that the “Rocket Cargo” effort is its fourth “Vanguard” program, joining the Skyborg wingman drone, the Golden Horde weapon swarming initiative, and the Navigation Technology Satellite 3 as top priorities to move from science and technology development to real-world programs.

The Department of the Air Force requested $47.9 million for Rocket Cargo development in its 2022 budget.

“Together with the Space Force, we will research commercial capabilities for DOD logistics,” said Maj. Gen. Heather L. Pringle, commander of the Air Force Research Laboratory, in a briefing. “Rocket Cargo is envisioned as a DOD interface with commercial capabilities, where we will deliver up to 100 tons of cargo anywhere on the planet in tactical timelines.”

As a Vanguard effort, the Air Force Research Laboratory is leading studies to determine if using space launches to deliver material, and possibly personnel, across the globe within hours is viable. If so, the Space Force could make it a program of record. The Space Force’s Space and Missile Systems Center will serve as the Program Executive Officer for the effort.

“Our role,” he said, is to provide “some of the use cases for what it would take to either move humanitarian or large-tonnage cargo” to a forward area. “What we really want to do is see where the [science and technology work is needed] for packaging it” on the rocket and moving it to forward areas “in a very quick manner” and cost-effectively. AFMC will also “help assess what the business case analysis is, whether there is a ‘there, there.'”

The idea has been floated within the Air Force before, and U.S. Transportation Command announced in 2020 it was working with SpaceX and Exploration Architecture Corp. to determine the feasibility of using private space companies to move cargo for the command. The Rocket Cargo Vanguard effort is separate from TRANSCOM’s initiative.

The idea of space cargo has “been around since the dawn of spaceflight,” but it never seemed realistic until recently as commercial capabilities have evolved, said Greg Spanjers, the Rocket Cargo program manager at AFRL. Rockets are bigger now, making it possible to carry about 100 tons—the equivalent of a loaded C-17. The cost of launches also have fallen, so it’s no longer such a major barrier.

“The reason we’re doing it now is because it looks like the technology may have caught up with a good idea,” Spanjers said. “Caught up enough for us to buy this and use it operationally today? No. There’s a number of S&T that we need to do to adapt this commercial capability into the DOD mission.”

AFRL’s focus will be on finding commercial capabilities to land a rocket on “a wide range of non-traditional materials and surfaces, including at remote sites.” AFRL wants the rockets to be able to land near personnel and structures and be rapidly loaded and unloaded. The rocket also should be able to air drop cargo after re-entry to service places where it could not possibly land.

While SpaceX has become the most visible company when it comes to reusable space launch, there are several companies that have developed capabilities, though Spanjers would not specify exactly how many would participate.

If the demonstration is successful, the Space Force would likely buy commercial cargo launches in the same way it does its current launch operations, said Brig. Gen. D. Jason Cothern, the vice commander and primary executive officer for the Space Enterprise Corps with the Space and Missile Systems Center.

“We believe that this early and active engagement is crucial to the success of bridging that S&T valley of death in order to deliver joint warfighting capabilities. If this technology demonstration proves successful and shows that terrestrial rocket-based cargo transportation is viable, and affordable, and advantageous to our DOD logistics train, SMC will be responsible for transitioning this Vanguard to a Space Force program of record,” Cothern said. “So, our goal is to be an early adopter here [with] this capability, by rapidly enhancing and leveraging the commercial investments and the advances we’re seeing for DOD purposes.”

Editorial Director John A. Tirpak contributed to this story.