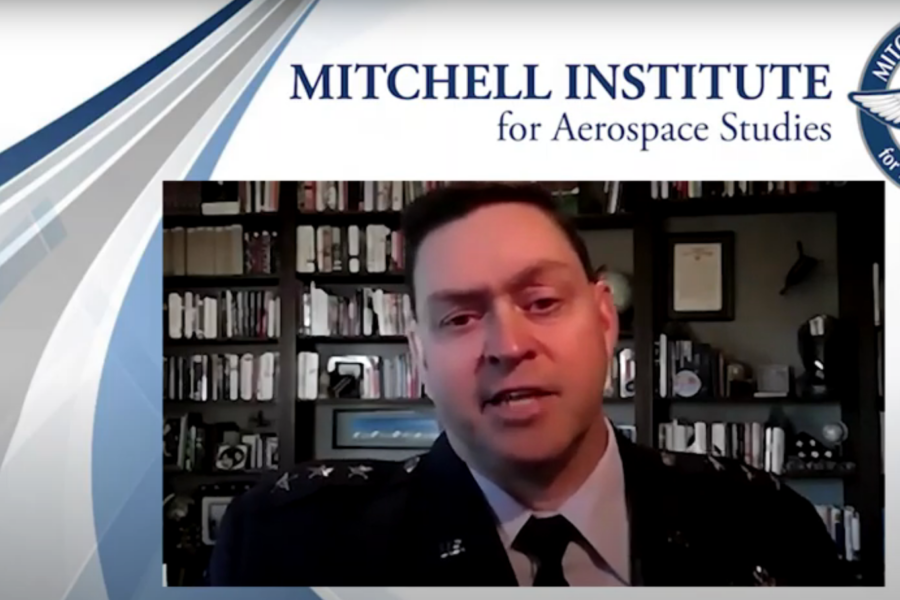 Recent Russian and Chinese tests of space weapons are a “natural consequence of military behaviors,” and the U.S. must now “mitigate this threat,” the Space Force’s operations chief said.

“When you are behind, you look for ways to seek vulnerabilities of your adversary and your competitor so that you can regain the strategic advantage, and we’re seeing that play out,” Saltzman said. “We’ve had an advantage for a long time. They’ve watched how we’ve prosecuted campaigns from Desert Storm and beyond, and they know that if they can take those capabilities away from us”—such as those enabled by the Space Force’s satellites or ground-based radar stations—“that it can bring more parity to the strategic military environment.”

Saltzman described the Space Force’s strategy for addressing kinetic anti-satellite weapons, or ASATs, as in the case of the Russian test, as a mix of diplomacy in the form of “international peer pressure” and of rendering such weapons obsolete with dispersed constellations.

He alluded to potential tweaks to existing missile defenses, including the addition of artificial intelligence, that could make them more suitable for tracking different objects than they were originally designed and for defending against new long-range weapons, such as China’s suspected fractional orbital bombardment system (FOBS), thought to be able to carry a nuclear warhead, and of Russia’s long-range cruise missiles.

Russia’s Nov. 15 anti-satellite test created an estimated 1,500 pieces of orbital debris big enough to be tracked, and the Space Force is “now spending a tremendous amount of our time, energy, and capacity to characterize the nature of that debris field,” Saltzman said. The Space Force is responsible for identifying and cataloging space objects and characteristics of their trajectories.

“At a minimum, we know that it poses a hazard to the astronauts on the [International Space Station]—at a very minimum,” Saltzman said. “And it’s one of our basic responsibilities to make sure that we characterize all of the objects that are on orbit to protect not just humankind up there on the ISS but all of these very expensive, exquisite satellites that we spend blood, sweat, tears, energy, [and] national treasure to put into orbit.”

Saltzman said deterring a war from starting in space is one of the new service’s “primary responsibilities,” and the Space Force currently views deterrence as a two-sided coin: on one side is negating any benefits of a destructive act; on the other is imposing costs for violating accepted norms.

In terms of negating the benefits of a destructive act, the Space Force is “focused on resiliency,” which could include “more disaggregated capability on orbit,” Saltzman said, referring to the likes of dispersed constellations. “If they don’t know what to shoot at, then what’s the benefit of shooting? That’s the basic logic. And so we are actively pouring our resources into building a resilient architecture that no one satellite destruction would dismantle.”

On the other side of the coin is imposing costs for violating accepted norms. Of course, to be in violation, the norm has to exist. Saltzman said Defense Secretary Lloyd J. Austin III’s Tenets of Responsible Behavior in Space “is one of the ways in which we hope to start to combat this kind of behavior.” Tenets include limiting the creation of “long-lived debris” and maintaining safe trajectories. Saltzman cautioned not to underestimate the importance of setting a framework as a foundation for holding other nations accountable, such as through the United Nations or other international coalitions: “I think that international peer pressure is actually pretty valuable,” he said.

Inviting numerous countries to share a satellite, for example, “so that many nations are affected by a single satellite’s destruction … would raise the threshold for an adversary to take that kind of action,” Saltzman said. “If they think they can get away with things Scott-free, then it changes the calculus. … I think we [should] at least go through the research and development required to see what it would take to impose costs.”

Saltzman addressed speculation that Chinese testing this summer, reported in October, could have been of a nuclear first-strike weapon, saying it is “front and center because this is a very forward-edge technology capability,” in part because it likely can stay in orbit for long periods. However, he cautioned, “the words that we use are important so that we understand exactly what we’re talking about here. I hear things like hypersonic missile, and I hear suborbital sometimes, and so this is a categorically different system.”

For one thing, space objects have “inherent overflight capabilities” and the proposition “that you could routinely orbit a nuclear weapon over a country.” Analysts frequently point out that the Space Force’s X-37B autonomous spaceplane amounts to the same thing.

In terms of detecting such a weapon that can go into orbit then deorbit, his point was that it’s not a ballistic missile with a predictable trajectory.

“A lot of our warning is based on ballistic missiles because that’s been the primary threat for so many years,” Saltzman said. “So it’s incumbent on the Space Force, in my mind, to make sure that we’re developing the capabilities to track these kind of weapons—before they’re launched, ideally, but then throughout their life cycle, either on orbit or in execution of their mission set.

Saltzman hinted at one way the Space Force might advance its ability to track in a discussion of defending against Russia’s long-range cruise missiles.

“We own a great number of radars that provide missile warning. We own overhead capabilities from an [infrared] standpoint that can track some of these capabilities,” he said.

“So it’s incumbent on us to make sure we get the most out of those sensors to be able to maybe use them in a way they weren’t designed. We have a long history of this. We’ve gotten the most out of our systems because we have some really talented engineers that can change the way data is fused on the ground and actually pull more information out of the sensor data that we collect. So when we see a new threat, we immediately start pouring resources and brainpower into it.”