Skip to content
An Airman assigned to the 509th Bomb Wing, Whiteman Air Force Base, Mo., walks across a B-2 Spirit at Nellis Air Force Base, Nev., on Jan. 22, 2021. The wing's B-2s are taking the lead position at Red Flag 21-1. USAF photo by Senior Airman Dylan Murakami.
Expand Photo 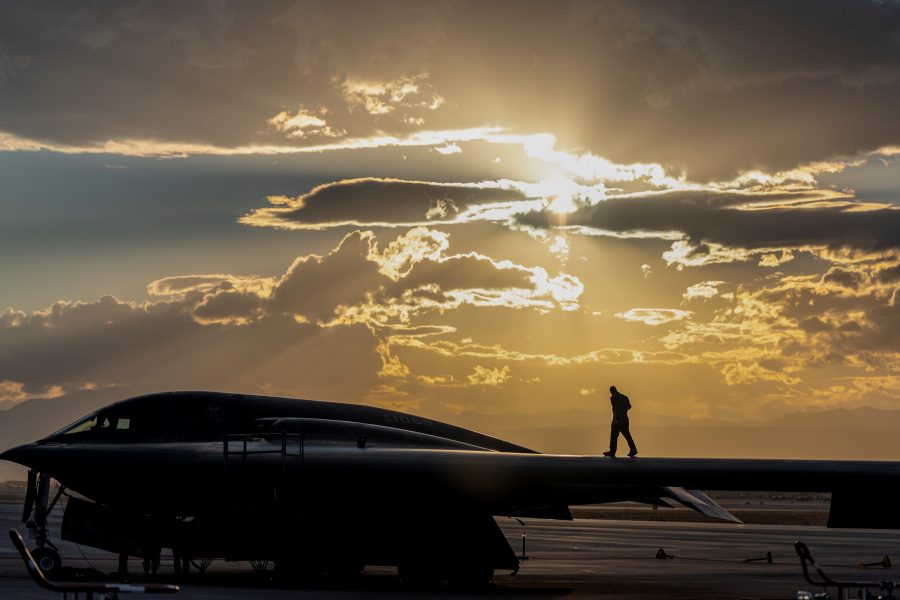 The 2021 iteration of the annual Red Flag combat air exercise at Nellis Air Force Base, Nev., is focused on great power competition, two of the minds behind the event told Air Force Magazine on Jan. 29.

“In the past, what we have done is we’ve had a kind of nebulous enemy out there that we’ve fought—somebody that’s challenging, somebody that … provides those problem sets and tries to punish our mistakes,” 57th Wing Commander Brig. Gen. Michael R. Drowley said in an interview. “But over the past few evolutions of Red Flag, we’ve really tried to take a National Defense Strategy approach, and tie the scenarios that we’re putting our participants through [to] real-world operations that they may see, either in Europe or the Pacific. So that way, if the flag ever goes up, they are that much more prepared for combat.”

With 27 unique scenarios (a mixture of offensive and defensive situations) inspired by the 2018 National Defense Strategy, this year’s exercise kicked off Jan. 25 and will run through Feb. 12. About 2,400 people are taking part, and USAF aircraft representation includes the A-10, F-15E, F-16, F-22, F-35, B-1B, and B-2, according to a Nellis release.

In addition, the Space Force is “applying both offensive and defense space capabilities in an integrated fashion with everyone else,” while the Navy is contributing EA-18G Growler electronic warfare aircraft, the Army is providing some manpower for “operational level command and control,” and the Marine Corps is providing “tactical command and control,” said Col. William A. Reese, commander of the 57th Wing’s 414th Combat Training Squadron, which heads up Red Flag and Red Flag-Rescue.

According to Reese, the multi-dimensional threat picture enabled by the integration of such a wide array of aerial assets enhances the U.S. military’s effectiveness against neer-peer adversaries.

Red Flag also incorporates aggressor forces across multiple domains, including MiG aircraft, as well as information and cyber aggressors, according to Drowley.

“They’re shifting their focus and their ability to replicate in all three domains—in air, space, and cyber, and …. to include surface threats—where we can now challenge our joint team, our coalition team, and if there’s a flaw in our plan, those aggressor forces are gonna find it, and they’re gonna exploit it, and they’re gonna punish us for those mistakes,” Reese said. “It is quite a battle.”

The exercise is also presenting participants with more challenging targeting scenarios, he added.

“We’ve made some efforts on our target side—specifically on the air-to-ground targets—where we’re doing things that make them harder to find, and we’re injecting exercise scenario-isms that will force our joint and coalition air component to think a little bit more agile while they’re flying,” Reese said.

This forces participants to use threat information, “package objectives,” guidance from the air component commander, and the level of risk that leader is comfortable taking to make “in-flight, real-time” choices. Following each scenario, he explained, these troops will debrief about the calls they made, “the cascading effects,” and how they can improve.

“It is amazing to watch our young Airmen and our young Guardians make real decisions that seem tactical in nature, but they indeed have strategic-level impacts, based on that senior leader commander’s guidance,” he said, adding that witnessing these troops succeed and make mistakes are both rewarding, especially since the latter “is exactly what this environment is for.”

“The airspace for the Nevada Test and Training Range is amazing—it’s a national gem—and for us to have the ability to fight in an airspace that’s 120 miles by 100 miles, wide and long respectively, it’s unlike any other place that we have available to us,” Reese said.

However, this year’s exercise looks a bit different due to the COVID-19 pandemic. In addition to participating forces from the U.K. and Australia opting to just send personnel vs. aircraft, Reese said that in order to mitigate exposure risks, masks are mandatory, hand washing is happening, there’s “disinfectant everywhere,” and briefings are broadcast to multiple rooms at a time to reduce the amount of people who need to be in close quarters with each other.

“The way that we have all of our meetings, all of our transportation, all of our briefings and debriefings, they’re all organized in a way that we put the risk areas into formations … ,” Reese said. This way, if someone tests positive for COVID-19 during the exercise, their formation can be benched while other, unexposed individuals, can continue to participate, keeping the training events on track.

According to Reese, the Space Force’s standup hasn’t significantly changed the mechanics of Red Flag. This year’s exercise trains participants on the same kinds of offensive and defensive capabilities as pre-Space Force iterations of the event.

However, he noted, Red Flag, as an institution, is prepared to evolve in tandem with the young military service.

“As they continue to migrate and train, organize, and equip in their own different fashion, we’ll continue to adapt and evolve with ’em,” Reese said.

“What today’s Red Flag accomplishes is … very tactical-level capabilities that have that operational feedback and strategic impact, where we see the layering of kinetic and non-kinetic, we can see how space enables fighter platforms, and how bomber platforms enable cyber effects, and how cyber facilitates both of those,” he said. “And so, what the team experiences now from the spectrum of just either putting a bomb on a target or the consequence management of what that means to the larger fight is just incredible compared to what Red Flag used to be. And that’s not to say it wasn’t great, but the critical thinking that we have applied now and the expertise to bring all those things together—it’s just superb.”