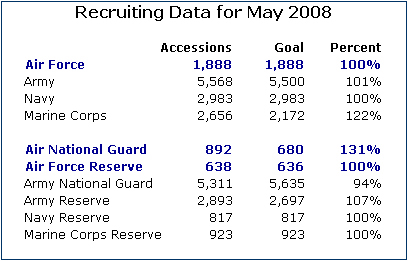 Pentagon’s newly posted recruiting figures for May 2008 show that the Air Force and its sister services met or exceeded their goals for the month, continuing to show strength in a year that was projected to be slow for attracting new volunteers. Only the Army National Guard fell slightly short of its marks, bringing in 94 percent, or 5,311 of the 5,635 new soldiers, for which it had planned. USAF met its goal for 1,888 active duty accessions, while the Air National Guard bested its goal for the fourth straight month, attracting 892 new airmen—131 percent of its goal. The Air Force Reserve exceeded its goal by two, recruiting 638.