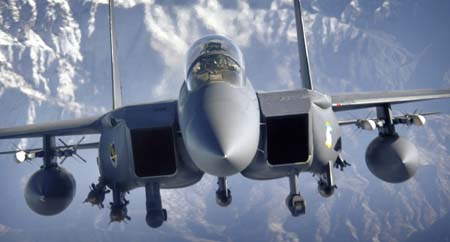 Airmen played a large, seemingly unheralded role in battling the enemy during the Taliban’s large-scale attack on a remote Army outpost on Oct 3 in Kamdesh, Afghanistan, writes defense correspondent David Axe, who is currently in Afghanistan. The attack claimed the lives of eight US soldiers and several Afghan army personnel, but according to a blog entry, Axe says his interviews at Bagram Airfield indicated the toll could have been far worse without the actions of airmen. Two F-15Es from Bagram that were already airborne when Taliban fighters swarmed the outpost quickly diverted to help, while four more F-15Es took off to join them, says Axe, adding that “heavy bombers” also pounded the enemy during the height of the battle. (Other news reports also cited other US or coalition airpower engaged during the action.) And, Axe says, “Air Force medical evacuation teams” flew [possibly HH-60 Pave Hawks] “several dozen” wounded soldiers out of the outpost as fighting subsided.