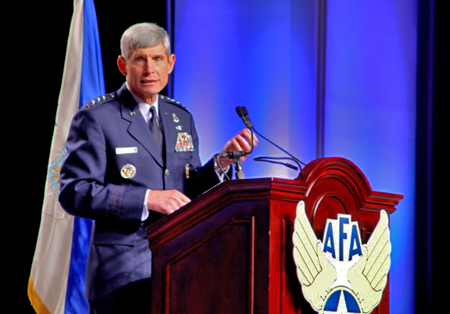 Air Force’s brightest days are still ahead of it, Chief of Staff Gen. Norton Schwartz told attendees at AFA’s Air & Space Conference Tuesday. While the service may not be the marquee player in today’s fight, its contributions in places like Afghanistan and Iraq are still critical to the success of those missions. And as the nation prepares to enter the second decade of the 21st century, the ability of airmen to dominate in the air, space, and cyber realms will become more important than ever and the service “will find itself in an increasingly significant role,” he said. “We will find our capability even at higher demand and ourselves increasingly influential in shaping and, at times, even controlling aspects” of the future geostrategic environment, said Schwartz. Along those lines, he said there are three truths of which airmen can be certain: Airmen “will always be trusted and reliable teammates” to their joint counterparts; “America depends on air, space, and cyber power” for its asymmetric advantage; and when called upon to fulfill a leading role, “the Air Force will again see its flag on the marquee and its centrality unquestioned.”