Skip to content
An F-22 Raptor fighter jet departs after being refueled by a KC-135 Stratotanker assigned to the 509th Weapons Squadron at Fairchild Air Force Base, Wash., over the Nevada Test and Training Range on June 12, 2019. The exercise was part of the U.S. Air Force Weapons Schools capstone, the culmination of their six-month USAFWS course. Air Force photo by Airman 1st Class Dwane Young.
Expand Photo 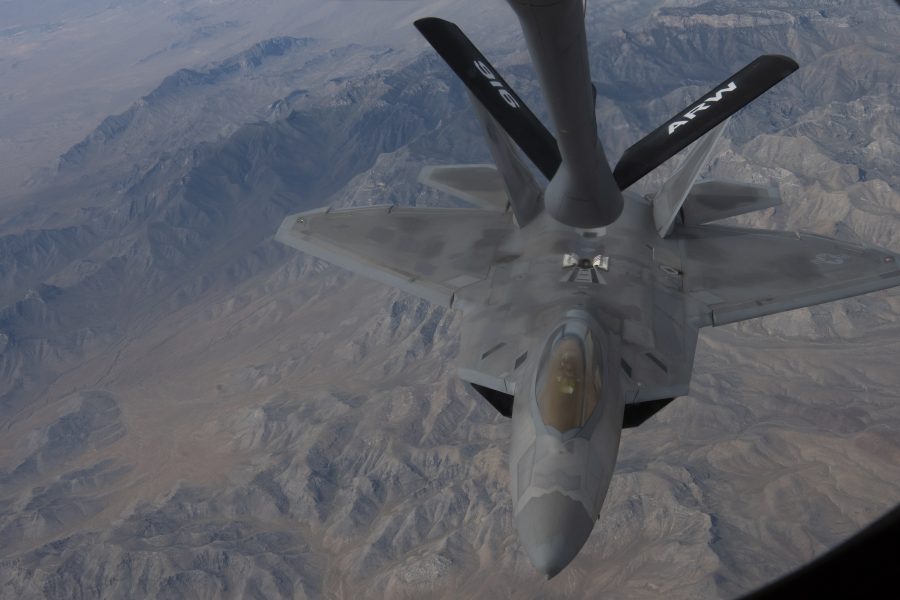 Private Tankers Could Help USAF Keep Up With Demand

The Air Force wants to use private aircraft to refuel its fighters and bombers within two years to help meet more than 25,000 non-supported flying hours in test and training, the service told a collection of companies recently.

Air Mobility Command is pursuing a contract for privately operated tankers to meet the unrelenting need for booms in the air as the service proposes cutting 29 KC-135s and KC-10s. The command is wrapping up a feasibility study on the plan this month with the goal of a contract solicitation in June.

During a December industry day at Scott Air Force Base, Ill., AMC told the 14 companies present it is pursuing the potential contract because of the high operations tempo, a changing force structure, reduced tanker fleet size, and a demand that is greater than the supply.

The initial requirement would be about 5,000 hours annually, totaling about 1,100 sorties, but eventually the Air Force would like to contract:

Companies would need to have at least one aircraft capable of both boom and hose and drogue refueling. The pace would vary, with an average of about three sorties per day, with the highest demand in April, August, and October, according to the presentation.

The command expects initial operational capability within 12 months of contract award, with the first step being Air Force Materiel Command testing requirements. After about 24 months the service would want the company to be certified on refueling its top priority aircraft—F-15s, F-16s, F-18s, B-1s, and B-52s. At this point, the service would task the contracted company for live missions with a total of about 3,000 hours.

Longer term, private tankers could refuel aircraft outside of the Continental United States, including more exercises, coronet missions outside the U.S., and supporting flying training units for multiple aircraft, according to the presentation.

While the presentation noted a possible solicitation in June, there’s no hard timeline on the process and no cost figure yet. AMC was working closely with the Federal Aviation Administration, who needs to sign off on the plan and “the FAA is really averse to having two airplanes very close together,” Miller said.

While the service’s budget request calls for cutting 16 KC-10s and 13 KC-135s, U.S. Transportation Command has balked at the proposal and asked lawmakers to keep 23 of the tankers flying. Aerial refueling is the most stressed mission area within TRANSCOM, the command’s boss Gen. Stephen Lyons said in an unfunded priority list to Congress last month.

Air Force Chief of Staff Gen. David Goldfein said last month that while the service understands the command’s need, it needs to look to future requirements.

“We’ve got to do the trade here,” he said. “The risk is real. If we had money, we wouldn’t be asking the combatant commanders to take short-term risk.”