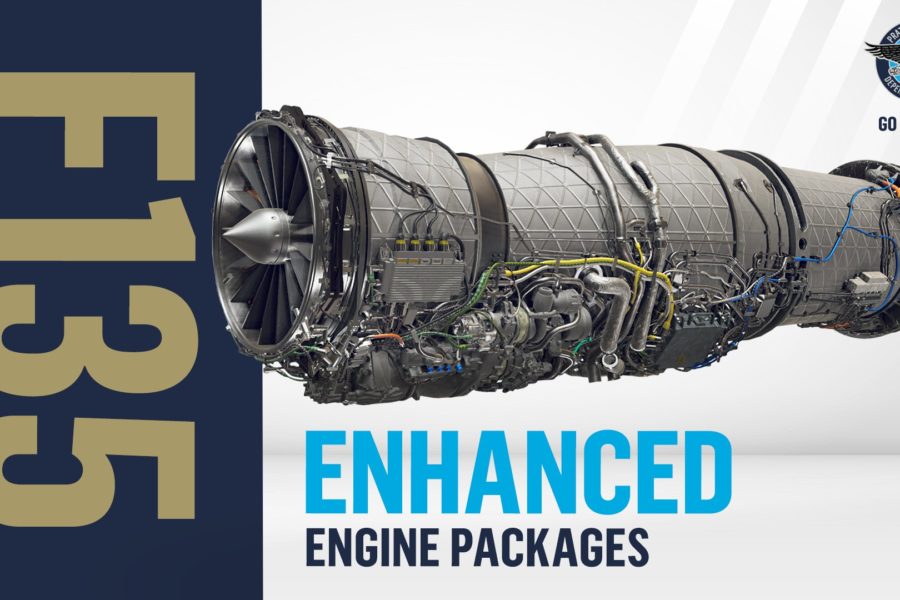 Modifications Pratt & Whitney is proposing to its F135 engine can improve thrust and efficiency and would be far less costly than giving the F-35 fighter a new powerplant developed through the Adaptive Engine Transition Program, the engine maker said.

Jennifer Latka, Pratt & Whitney’s vice president for the F135 engine program, said the AETP technology is not compatible with the Marine Corps’ F-35B. That would necessitate two different alternative engines for F-35. The whole effort could add up to $40 billion over the 50-year life of the program, she said in an interview with Air Force Magazine..

The House version of the 2022 National Defense Authorization Act would require the F-35 Joint Program Office to pursue a strategy to incorporate an AETP engine into the F-35 fleet beginning in 2027. Congressional sources said one of the goals is to drive down the cost of F-35 engines by creating a competitor to Pratt & Whitney. GE, which is high on the AETP technology, is eager to offer its XA100 as an alternative. Pratt, owned by Raytheon Technologies, has also developed an AETP engine, the XA101.

The Air Force invested in AETP to try to get more range and thrust from an engine about the size of the F135. The idea is to have both the fuel economy advantages of the turbofans used by large airliners with the high-pressure compression needed to maximize speed for a fighter. By enabling the engine to adapt on the fly, the program sought to gain the best of both worlds.

Latka said the F-35B’s unique short take-off and vertical landing lift system can’t accommodate the AETP engines. To create competition with GE, she said, two variants of each company’s engine would be needed, with parallel repair and supply chains. That contributed to Pratt & Whitney’s $40 billion cost figure, she said.

The Air Force’s Program Executive Officer for fighters and advanced aircraft, Brig Gen. Dale R. White, was similarly skeptical in an August press conference. Although he has no role in the F-35, he said, “trying to change a powerplant in … a fielded system is extremely complex. … You have to think about what the return on investment might be.”

Pratt & Whitney submitted a pair of proposals for modernizing the F135 engine to the JPO in March. The plans would improve thrust and range by more than 10 percent each and give the F-35B a 5 percent boost in vertical lift and a 50 percent improvement in thermal management, the company said. Heat damage has been a concern with these engines, and less heat could also potentially improve stealth performance.

The JPO asked for the study “at the end of 2020,” Latka said. The proposals can be “tuned” based on JPO requirements, she said, and the changes can be “cut in” to production in 2028. Once installed, there will also be “some margin” for growth.

There would be little industrial impact, as the Enhanced Engine Package, or EEP, could “drop into production as a retrofit … So it relies on the exact same infrastructure, and the same sustainment network, that we currently … rely on.”

“It is very well understood, now, across the board” that the F-35 needs an engine upgrade, Latka said. “We will need to modernize the engine, hopefully, one time over the life of the JSF program,” she said. Engine capabilities “have to be commensurate with the capabilities of the aircraft.”

While she could not discuss the Block 4 improvements that are contributing to the need for greater performance, it is understood that the F-35 needs to carry heavier payloads and weapons and that powerful sensors and electronics need additional cooling. Without a better-performing engine, “they can’t use the jet the way it was intended,” she said, quickly adding that “there are no deficiencies” in the F135’s performance as it stands today. “If anything, the engine is already overperforming on the original spec … This is all about growth.”

One advantage of the AETP engine, according to GE, is its third airstream, which its officials say can be used to help cool the F-35’s electronics.

Pratt & Whitney is investing millions, meanwhile, to try to drive down sustainment costs for its engine, a major contributor to the F-35’s high operating costs. “We get it,” she said. “Affordability is the existential threat to this program.”

She continued: “We’ve taken 50 percent out of the unit cost” of the F135, she said. Improvements would reduce costs further, taking 36 percent out of the cost for the initial shop visit, she added. “That’s where the big bills come,” she added, because parts of the hot section hardware have reached end of their service lives.

“We know how to take cost out … Our whole commercial profile is ‘power by the hour,’” Latka noted.

Absent such improvements, the services will need to run the engines hotter to make use of Block 4 capabilities, and while they can handle it, “that means … the engines come in for maintenance” more frequently, increasing sustainment costs.

Latka said Pratt & Whitney’s proposed improvements have nothing to do with achieving the Air Force’s goal of cutting operating costs to $25,000 per hour by 2025. The upgrades are also not specifically intended to create more electrical power for onboard systems, she said.

The JPO holds a meeting of F-35 partners, operators, and other stakeholders twice a year to discuss future plans, and propulsion is likely to be on the agenda for the next meeting.

“We need to crystallize on what the requirement is,” Latka said. “And then we figure out what the most cost-effective solution is once we understand that requirement.”

“There’s a significant amount of risk that comes with brand-new technology, and that would require a … tremendous amount of validation to be done,” Latka said. “We’re saying, the AETP is not the right fit for the F-35.”